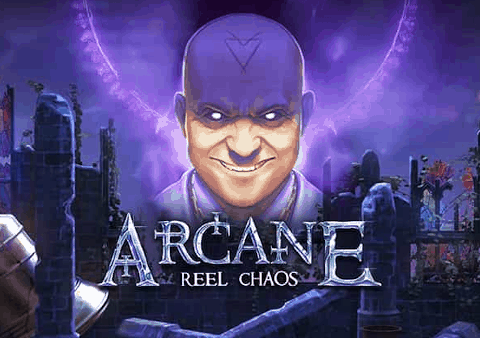 In total, Arcane Reel Chaos has 20 paylines that function from left to right across the board.

❓ What is the Arcane Reel Chaos slot RTP?

❓ What is the bet limits of Arcane Reel Chaos slot game?

❓ What is the maximum win in Arcane Reel Chaos?

The Deep Pocket symbol is the most lucrative of the pay symbols, so although he’s the villain, he is also the hero of the game in some aspects. He will give you up to 50x your initial stake.

✅ Yes! Collecting 3 Scatter symbols during the base game will award you with the Free Spins round.

You’re joined by 4 novel styled heroes as you try to save the city from this villains onslaught of madness. Set inside a crumbling church, it’s down to you to stop Deep Pockets before it’s too late.

Arcane Reels Chaos is packed full of special features to help you overcome this evil genius. Random Re-Spins, multipliers, Stacked Wilds, and a 4 level bonus round are some of the epic features you can expect to find here. 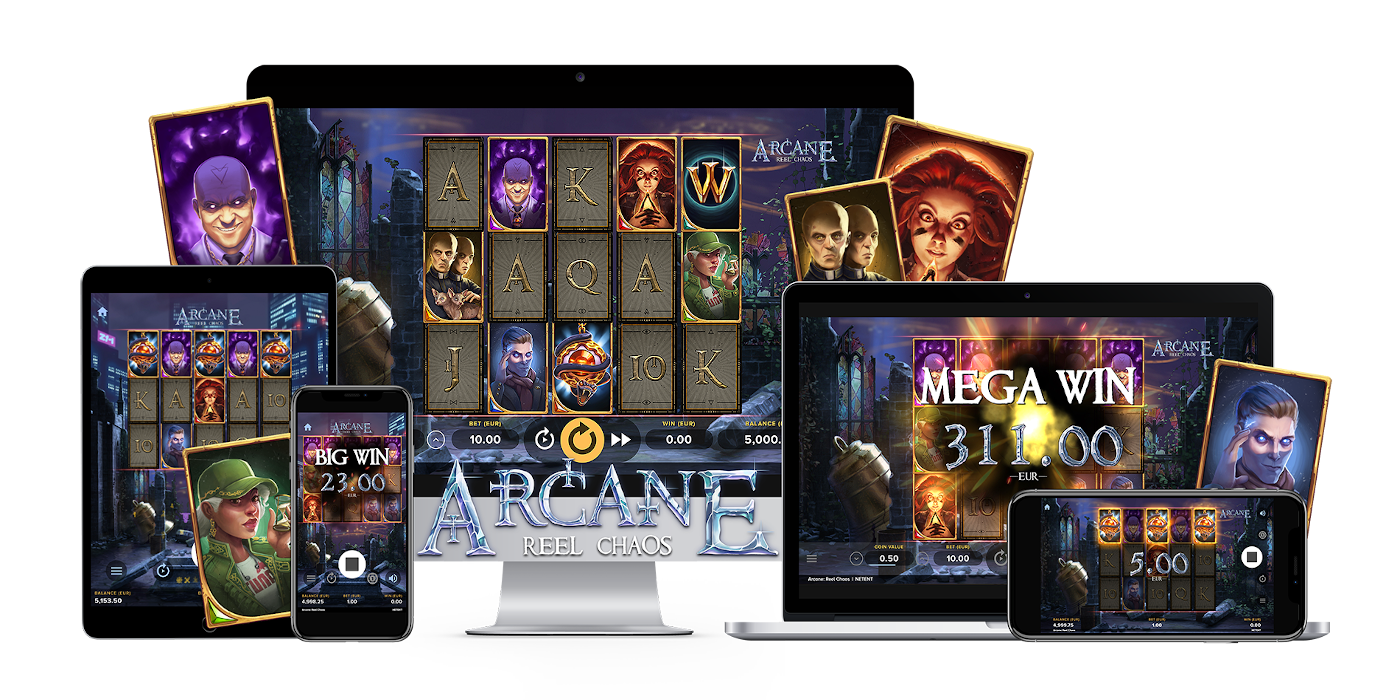 First, you’ll notice the gothic theme of a futuristic-looking city. The theme is reminiscent of other fictional cities that always seem to fall victim to villains such as Gotham City from Batman. The orchestral backing track adds even more to the intensity and drama.

5 reels and 3 rows sit center view inside a desolate church scene. In total, Arcane Reel Chaos has 20 paylines that function from left to right across the board. Either side of the screen has ample space left for special features to play out.

Each symbol is represented in a playing card style, such as the detailed portraits of the magicians’ Flare, Chronos, Zero X, and Psyop on them. These are your High-value symbols and forces to be reckoned with against Deep Pockets when their special feature is triggered.

The rest of the symbols you’ll see include your typical playing card style numbers and letters, 10, J, Q, K, and A. Plus, the Wild symbol, and a Scatter symbol. 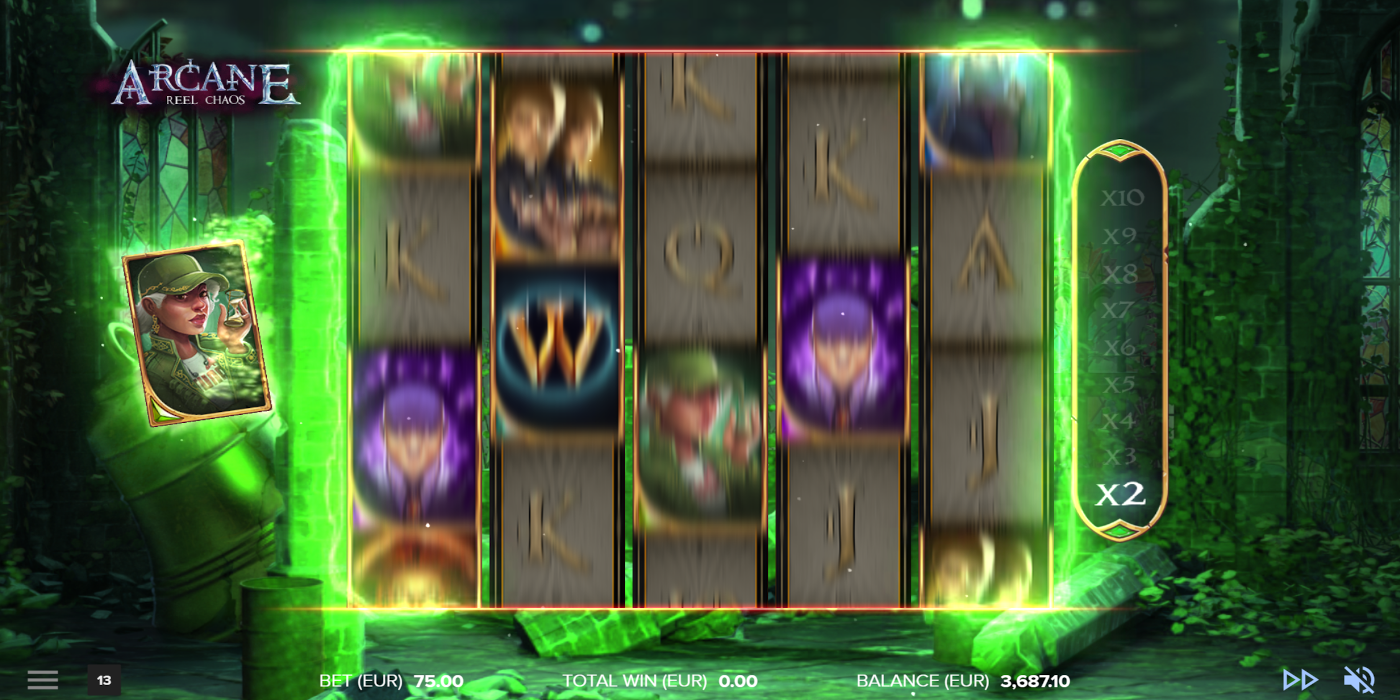 The Wild, like in most other video slots, substitutes for all other symbols except the Scatter symbol.

Like previously mentioned, the hero characters each have their own special feature attached. Interestingly these special features are randomly triggered throughout the base game. Each one is as powerful as the last in your fight for the city’s freedom.

Collecting 3 Scatter symbols during the base game will award you with the Free Spins round. The camera view will pan out, and a hero card will move to the left as evil Deep Pocket sits to the right-hand side of the screen. 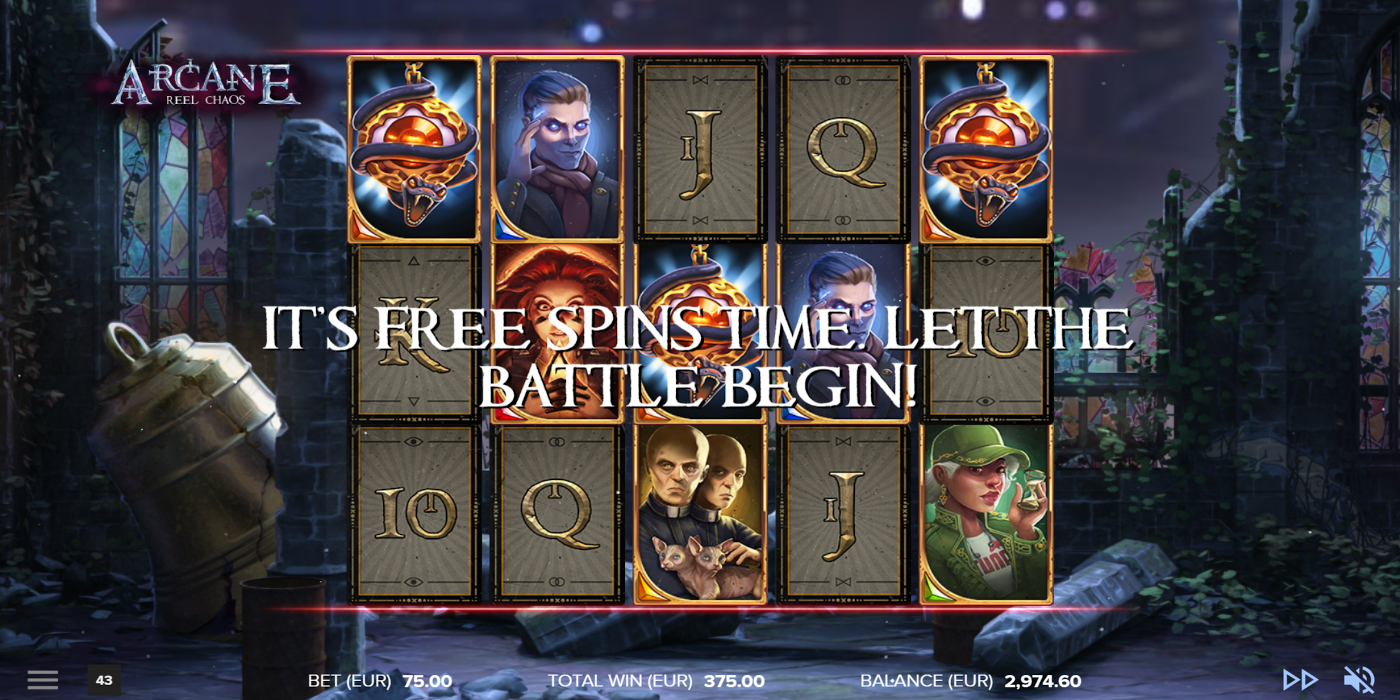 They will then battle it out over 4 stages, and if the hero defeats Deep Pockets, you’ll be awarded the Victory Bonus prize.

Arcane Reel Chaos brings together stunningly high-quality visuals, with novel character designs. Plus, innovative ways of displaying the action as it unfolds on your screen.

NetEnt has combined variants of pop-culture trends, such as comic novels and top trumps in this meticulously put together video slot. It has an array of randomly triggered features that allow for not only an immersive gaming experience but also potential Big Wins.

The character features are activated prominently throughout the game. Chrono’s Re-Spin feature does wonders at keeping the action flowing. Meaning that although you’ll hit empty spins like in any video slot, you still have the opportunity to make up for the lost spins afterward.

The Free Spins round is a little more elusive, but for a good reason. Here you can gather some serious cash if you progress to the final stage and, on top of that, have the chance at winning the Victory bonus prize. 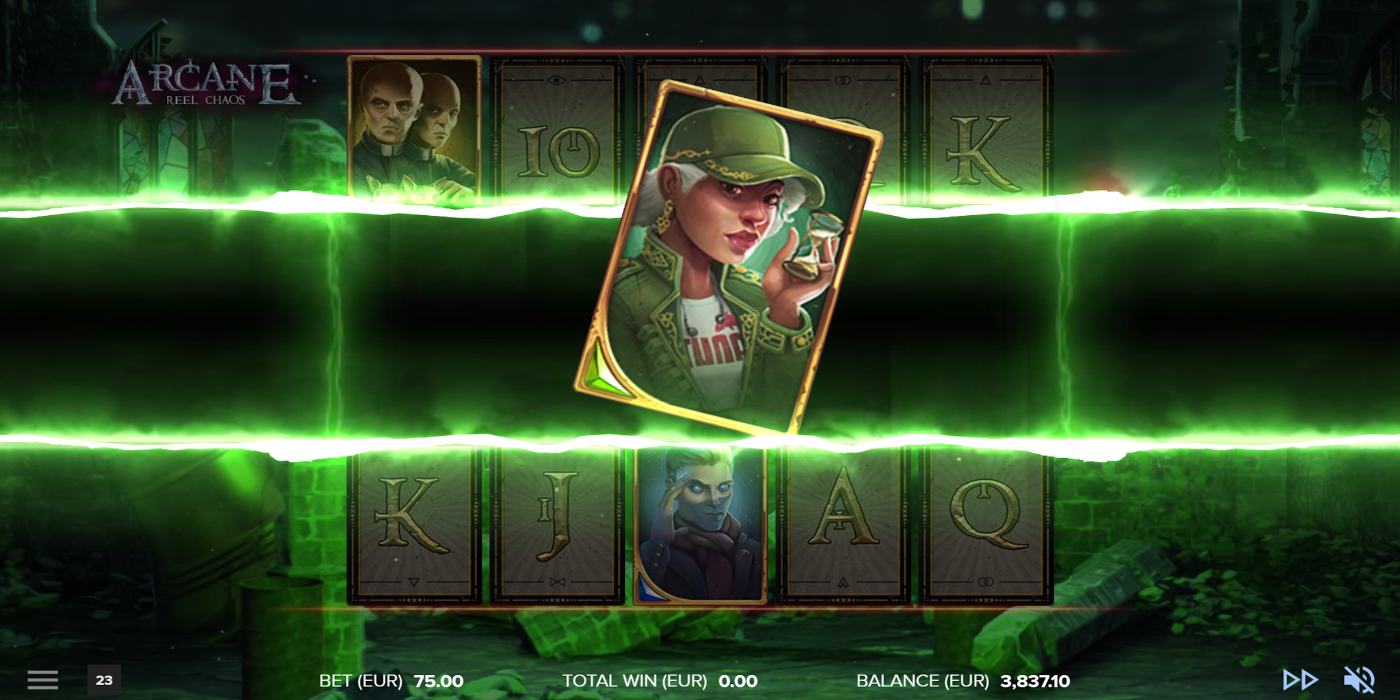 All in all, the well thought backstory and theme played out masterfully on your screen, while the large bundle of features boosts this video slot into a superior ranking.

Arcane Reel Chaos has a standard paytable set-up. You must match 3 or more of the same symbols from left to right.

You can join in the chaos for as little as €0.20 a spin and wager a maximum of only €200.00. The volatility rating set at low, with an RTP of 96.81%. This means that you can expect to get back what you put in over the course of your playing time. You may find with this slot that the occasional Big Win follows on from a succession of empty spins to make up the difference.

The Deep Pocket symbol is the most lucrative of the pay symbols, so although he’s the villain, he is also the hero of the game in some aspects. He will give you up to 50x your initial stake.

Arcane Reel Chaos slot is a captivating take on modern video slot gaming. The incorporation of randomly triggered features is a welcome one that NetEnt now features in many of their top of the slots releases.

The design, in general, is appealing and makes the battle between bad and good highly entertaining to watch. Somehow the movement of the cards and screen makes the game feel more interactive than it actually is. These design elements add to the dramatic storytelling of the character’s history. 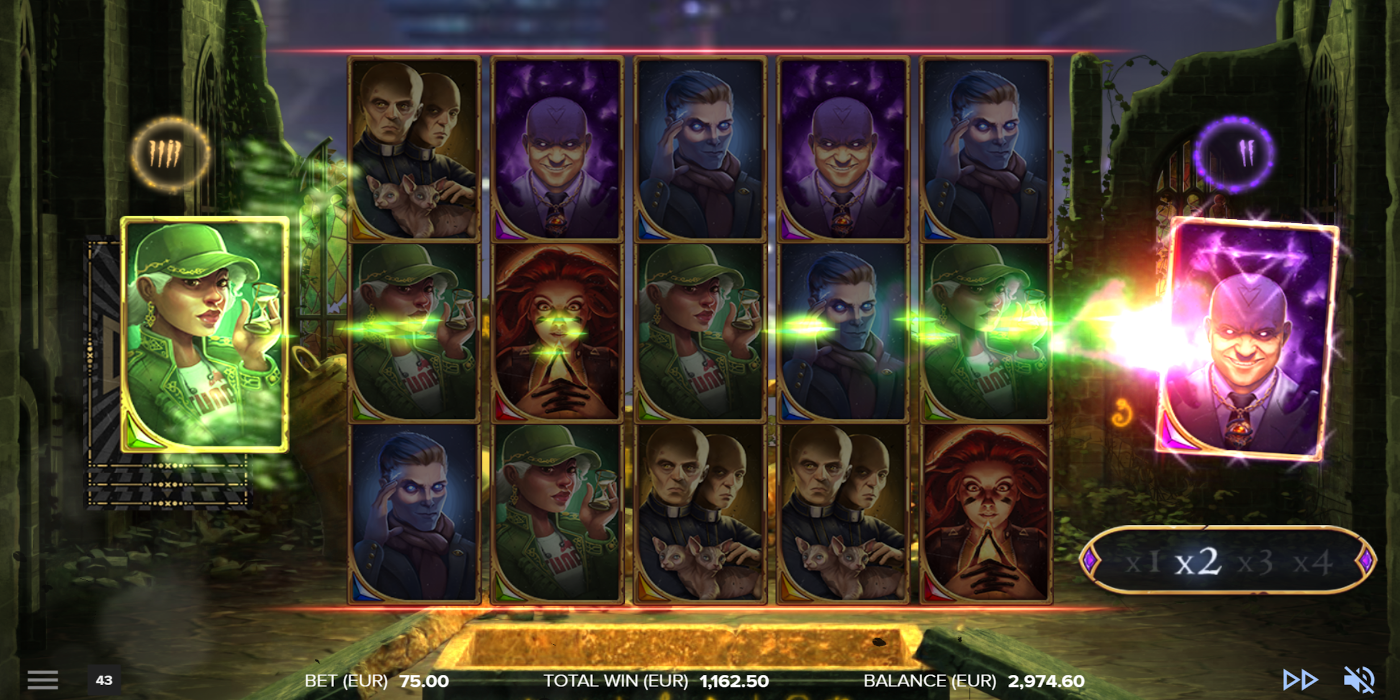 The only downfall to Arcane Reel Chaos is the surprisingly low maximum betting limit. It’s underwhelming, to say the least, and not something we’re used to from a NetEnt game. Although it may discourage the high-rollers among us, it’s perfect for players who enjoy little risks and frequent rewards.

If you’re a fan of superhero novels and dark atmospheric gaming, then Arcane Reel Chaos will be right up your street. Try it today to see if you defeat the evil villain Deep Pockets with the help of your 4 magical superhero comrades.