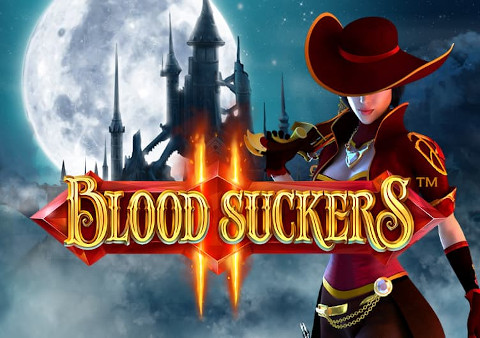 Blood Suckers 2 slot powered by Net Entertainment is the sequel to the famous original Blood Sucker. Based off of the 1st instalment to this story, you’ll enjoy many of the same features, but with 2 bonus features you shouldn’t miss out on.

This video slot game has 5 reels, 3 rows and 25 paylines.

❓ What is the Blood Suckers 2 slot RTP?

The RTP sits at a healthy but lower than the original 96.94%, and it’s ranked at low volatility.

❓ What is the bet limits of the Blood Suckers 2 slot?

❓ What is the maximum win in Blood Suckers 2 slot game?

There is ample opportunity to win big in Blood Suckers 2 with a total of 489x your stake up for grabs during the base game alone. Plus, a further 1,298x your stake through the bonus features.

❓ What are the special features of the Blood Suckers 2 video game?

NetEnt has included all the fan-favourite features into this slot game. Find out about all of these in this Blood Suckers 2 slot review.

Joins young vampiress Amilia as she searches to retrieve her ancestors’ hidden treasure from a vampire castle. Her predecessors were hunted and killed by vampire hunters. Now it’s your job to help her uncover the secret places in which they stashed their fortunes.

No time to lose, help Amelia as she tries to outwit the Demon guards in her attempts to get hold of the riches that lay within the castle. 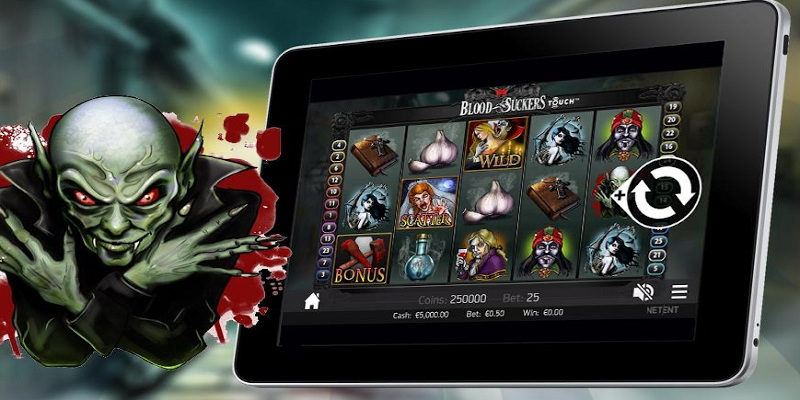 Set in an abandoned vampire hoards castle, you will see 5 transparent reels over a dark, mysterious castle chambers backdrop. 25 paylines and plenty of special symbols give you ample opportunity to create winning combinations and trigger special effects.

On the reels, you will see the stunningly depicted card suit symbols, vampire hunters, and demons. There’s one vampire hunter that holds the highest value. He’s wearing traditional red clothing. Landing 5 of him will give you 20x your stake.

Within the base game, 2 special features appear randomly. Plus, 2 bonus game features to play. 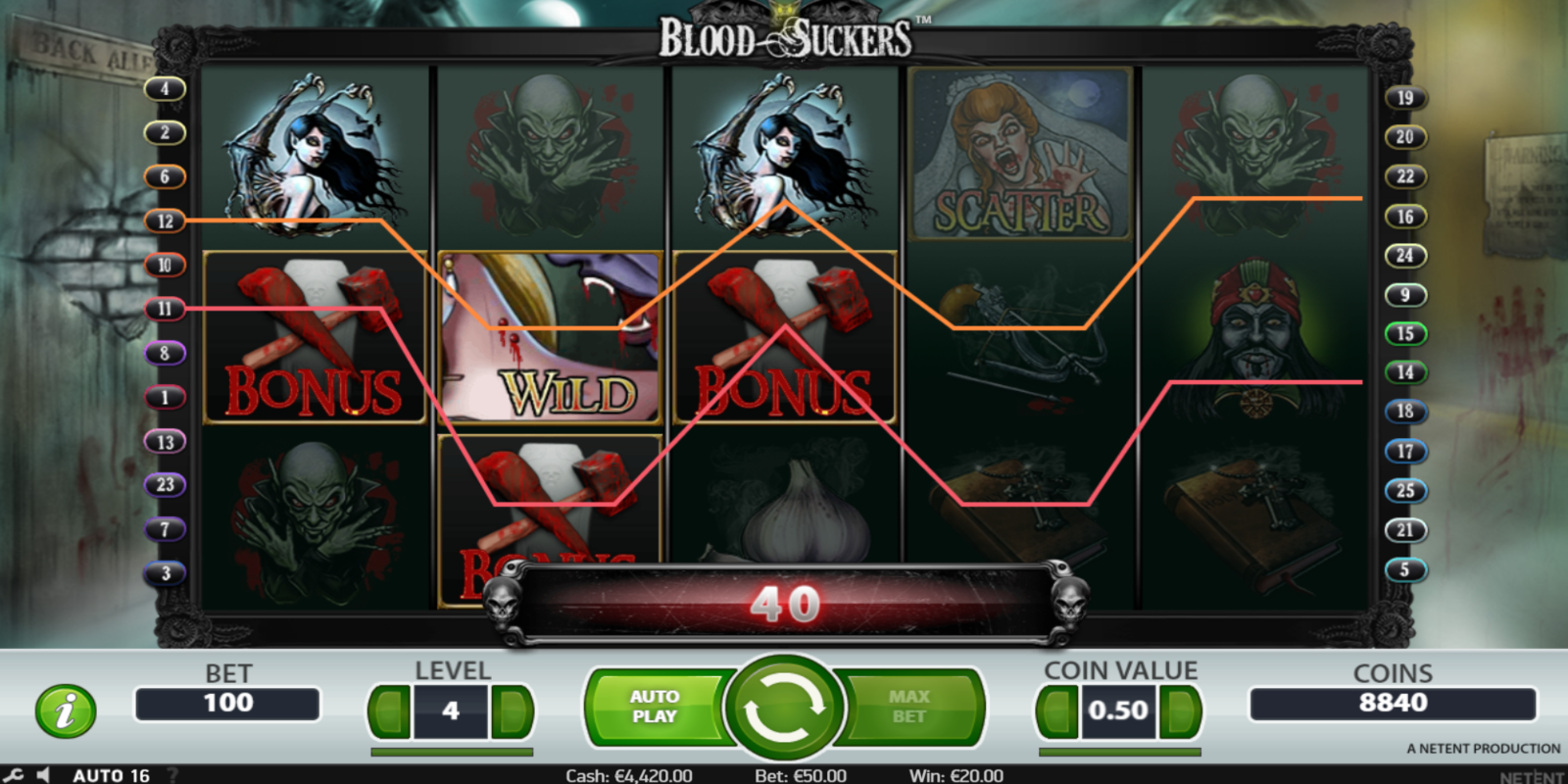 In Blood Suckers 2 slot, you’ll be delighted that NetEnt has included all the fan-favourite features, including the Wild.

The Wild symbol in this video slot can substitute for all other symbols except the valuable feature symbols like Scatters and Bonus. However, in this variant, the Wild can also make independent winning combinations if you land 2 or more on a successful payline. Landing 5 across a payline awards you10,000 or 400x your stake!

The Scatter Shot feature appears at random throughout the game, dropping an extra Scatter onto the reels in order to activate 10 spins. It ups the value of the symbols too; for example, medium value symbols will award between 10 and 100 times your wager.

Bonus Shot is similar to the Scatter Shot in terms of its appearance on the board, but this time it will land on reels 1-3. To signify that the Shot features are in play, Amelia will start shooting at the reels – giving off ‘shots.’

During the base game, you’ll also see the Bonus symbol. If you land 3 or more anywhere on the board, as long as they appear on consecutive reels, you will trigger the Hidden Treasure Bonus. If you trigger this bonus game with 4 Bonus symbols, then you’ll receive an x2 multiplier. However, if you’re lucky enough to land 5, then your multiplier will be tripled!

In this mini-game, you’re taken for a tour of the castle’s sleeping chambers. Here, you will have to decide from several coffins that hide hidden treasures. You can discover cash prizes, keys, Scatters, or the Demon.

Collecting 3 Scatters during this feature starts the Blood Rose Free Spins bonus. Here you will be taken to another castle scene and awarded 10 Free Spins. 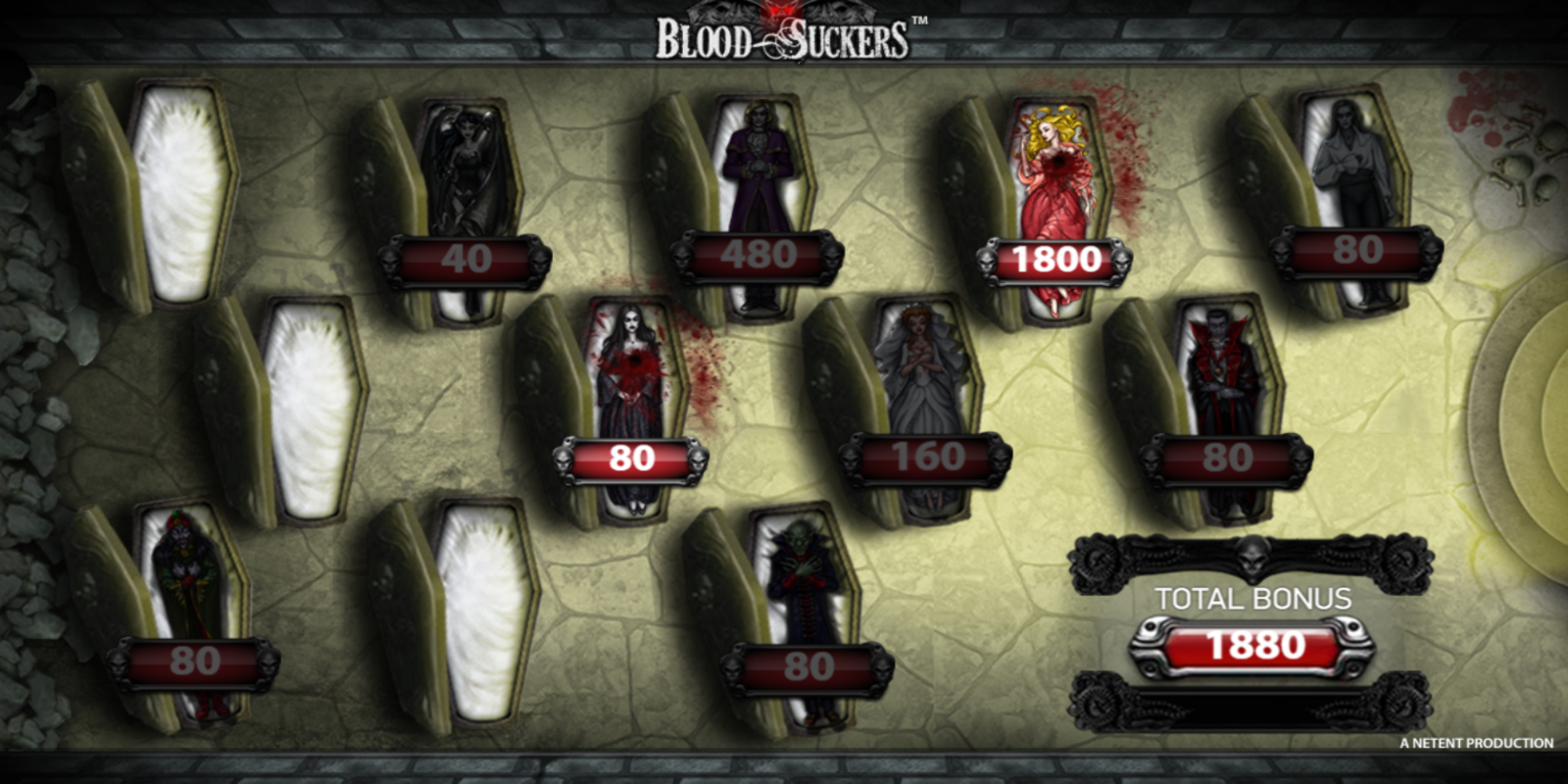 If you find the hidden key, you’ll then be taken to the next level and a new set of coffins to choose from. Finding the key symbol during the last level, which is level 5, will see you receiving 40x your stake.

Be wary of the lurking Demon. He will end the Bonus game in its tracks and send you back to the company of Amelia in the base game. If you manage to hit all the lucrative spots, get past the Demon, and find the level 5 key, you’re in for the chance of winning 670x your stake.

Blood Sucker 2 is captivating. The character of Amelia draws you in from the get-go as she encourages you to play on at the side of the reels. Its intense soundtrack adds another element to the dark and mysterious atmospheric theme of vampires and demons.

The addition of bonus games with multiple scenes and levels makes you feel like you’re playing a superior slot game with complex mechanics. It not only gives a deeper connection to the story but also allows you to be in control of the game even more so than hitting the sin button.

The Bonus game feature elevates this video slot and is what sets it apart from the crowd – giving you two reels to play on and a new style of gaming in between. There are also all your favorite features such as Scatters and Wilds but also the extra twist of the Shot features.

With all of the special symbols and bonus features in play, you can expect to find some serious treasure in Amelia’s ancestry home. In comparison to the first Blood Sucker game, this version has upped the ante on features and stakes overall. 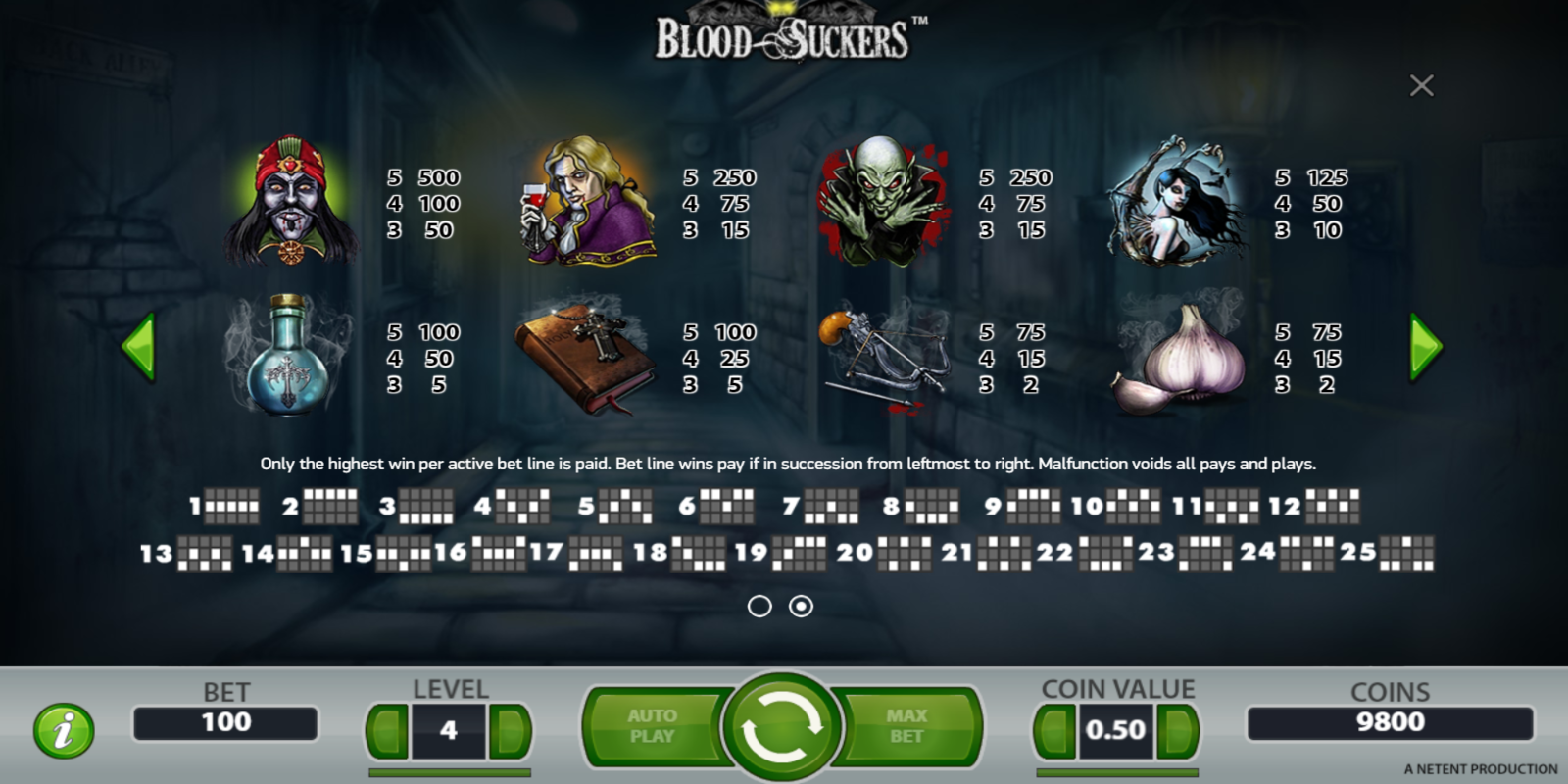 Blood Sucker 2 slot is accessible for all levels of slot players. You can place your bets starting at €0.25 and stretching as far as €250 per spin.

There is ample opportunity to win big in Blood Suckers 2 with a total of 489x your stake up for grabs during the base game alone. Plus, a further 1,298x your stake through the bonus features.

The RTP sits at a healthy but lower than the original 96.94%, and it’s ranked at a low volatility. Allowing you to win small but often with big payouts later down the line.

If you love everything that goes bump in the night and dark and mysterious stories tickle you, then Blood Sucker 2 slot is a must-try. Here you’ll find thrilling features, Bonus games, and stake multipliers galore. 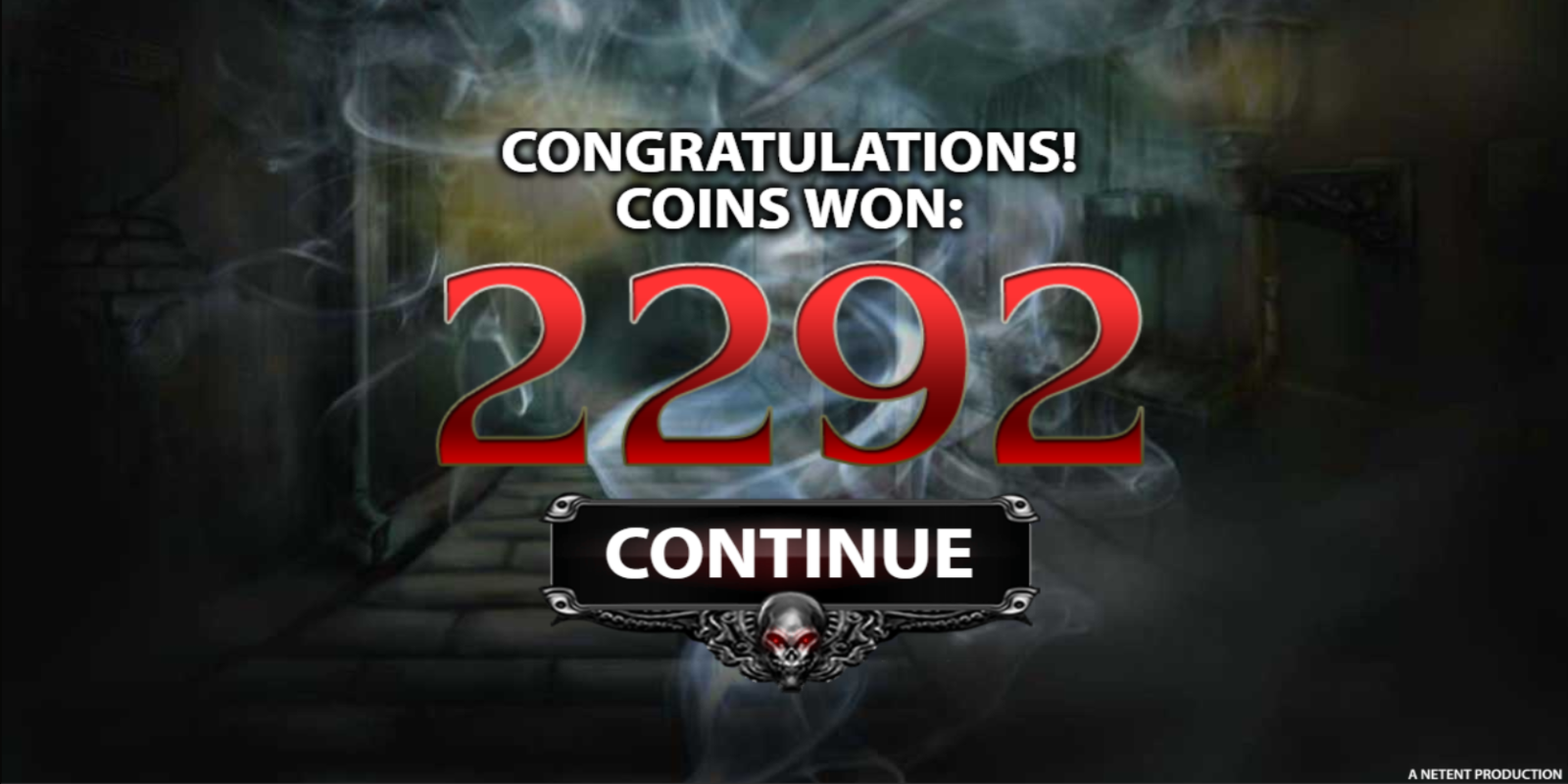 Moving from room to room through the castle, going up levels, adds depth to your gaming experience. Plus, the chance to play a new style of video slot gaming is growing in popularity.

Don’t fall victim to the age-old belief that sequels are never as good as their predecessors; NetEnt will only prove you wrong with Blood Suckers 2. So put away the garlic, turn off the lights, join in the vampire fun, and get coffins full of gold for all your efforts.