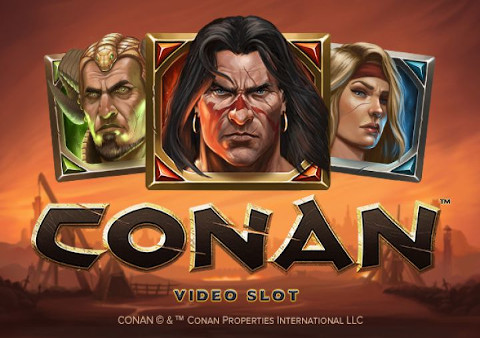 Conan is a branded title from NetEnt Gaming based on the legendary fictional character and action movie Conan the Barbarian. This action/fantasy underdog come hero story has been the center of a thriving franchise since the 1980s.

What do people ask about the Conan slot game?
❓ How many paylines have Conan online video slot?

❓ What is the Conan slot RTP?

The RTP ranges from 96.01% to 96.65%, while the volatility averages medium, increasing too high during the Temple Free Spins.

❓ What is the bet limits of Conan slot game?

❓ What is the maximum win on Conan slot machine?

You can get your barbarian hand on 288 times your stake if you manage to land a fullscreen of Conan symbols. Plus, with the x7 multiplier activated, you could take home 2,016 times your stake for a pay-both-ways instead!

❓ Is the Conan slot game has Free Spins feature?

✅ Yes! Find out all detailed information about Free Spins in this Conan slot review.

Now it’s time to bring him and all the beloved characters back to life in this action-packed and special symbol heavy video slot. Join Conan as he sets off on a quest to avenge his parents’ murders by the villain Thulsa Doom.

Be transported to the world of Conan the barbarian. Watch him battle with snakes, uncover golden skulls, and explore territories in his quest for vengeance.

This video slot has an array of barbaric bonuses through the base game and beyond. Are you brave enough to step amongst barbarian warriors to fill your pockets full of gold?

Head to a fictional but familiar village from the movie scenes to be faced with the 6 reels, 4 rows, and 24 paylines. The reels are full of fearsome faces, the characters from the movie. These intricately drawn and animated characters are Conan, Thusla Doom, and Valeria. They represent the premium paying symbols. Landing 6 of one character across a payline will see you receive up to 6x your stake.

Around them, you will notice an array of different metal coins. These coins depict the low-value symbols and will award you up to 1.5x times your stake for 6 of a kind.

Conan also has a set of medium valued symbols. These include the grappling hook, sword, and helmet. These symbols occur less frequently and hold up to 3.5x your stake for 6 over a single pay line.

Conan boasts a pay-both-ways gaming mechanic. This allows you to create winning combinations from both left to right and the reverse.

To spice up the action even further, NetEnt games has brought to the show the Linked Reels mechanics found in their other top of the slot hits such as Twin Spin. They’ll trigger randomly, making two reels in one section mirror each other. More than one section at a time can light up with linked reels, and it’s also active throughout the Free Spins round.

As mentioned above in the base game, the reels are divided into sections. Each of these 2×4 vertical sections come with a reel modifier attached. You can see the division by looking closely at the background of the reels.

Each modifier feature is activated when the respective special symbol lands on the appropriate reels. You can trigger all 3 modifiers in a single spin.

When you manage to line up a full stack of snakes on reels 3/4 plus active one other modifier, you will trigger the Thoth Amon feature. This feature sends out mystery snake chaos across the reels. Up to 6 additional mystery snakes will appear on reels 2-5, and they’ll leave behind a new symbol.

Landing 2 Scatter symbols will see the next reels turn set ablaze. They’ll then go into hyper-spin to try and land the final Scatter symbol needed to trigger the Free Spins feature. There are 3 Free-Spin locations, each with an advantageous feature from the base game. Landing the minimum 3 Scatter will award you 10 spins, but landing 6 will see you paying with 50 spins.

Upon triggering the Free Spins, you’ll be taken to a choice screen where you can decide your fate.

There’s so much going on in Conan; it’s clear to see NetEnt have developed an elite slot. It’s feature-rich and includes a wide range of innovative game mechanics. Plus, the lucrative chain reaction bonuses throughout the entire game help towards big wins.

The branded theme portrays the Conan the Barbarian franchise beautifully in crystal clear animation. Plus, it has movie-worthy backing music to captivate you further.

The linked reels, sectioned reel mechanics, and a choice of Free Spins modifiers, all make for a winning combination that sets this slot apart from the rest of the fantasy/action video slots on today’s market.

Conan is unique to most as it has a sliding scale of RTP and volatility, depending on which feature is in play. The RTP ranges from 96.01% to 96.65%, while the volatility averages medium, increasing too high during the Temple Free Spins.

The betting limits are set at between 0.20€ and 200€ per spin. You can get your barbarian hand on 288 times your stake if you manage to land a fullscreen of Conan symbols. Plus, with the x7 multiplier activated, you could take home 2,016 times your stake for a pay-both-ways instead!

NetEnt never fails to produce feature-rich and visually captivating branded games. They sink all of their efforts into being just as cinema worthy and fan favorite as the movie itself. With Conan, they haven’t let us down.

The gameplay is fast-paced and action-packed with hardly any empty spins. With this being said, the only downfall is with so many special symbols comes the challenges of lining up matching symbols to create winning pay lines.

The inclusion of innovative mechanics involving standard symbols creates a thrilling gaming experience, which will keep you spinning for hours.

If you’re a film buff and grew up with Conan the Barbarian, don’t miss this opportunity to play such an advanced branded video slot.