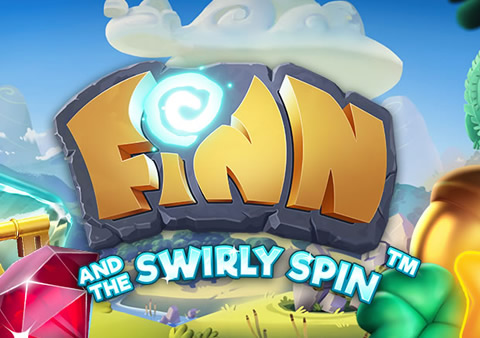 Play for real Play for fun

Finn And The Swirly Spin Slot game – How to play and Where to play?

Prepare to search for the gold hidden at the end of the rainbow with the magical leprechaun, Finn, as your guide. In Finn and the Swirly Spin slot game, you will find yourself drawn into the enchanted lands of Ireland with an exciting journey in store. 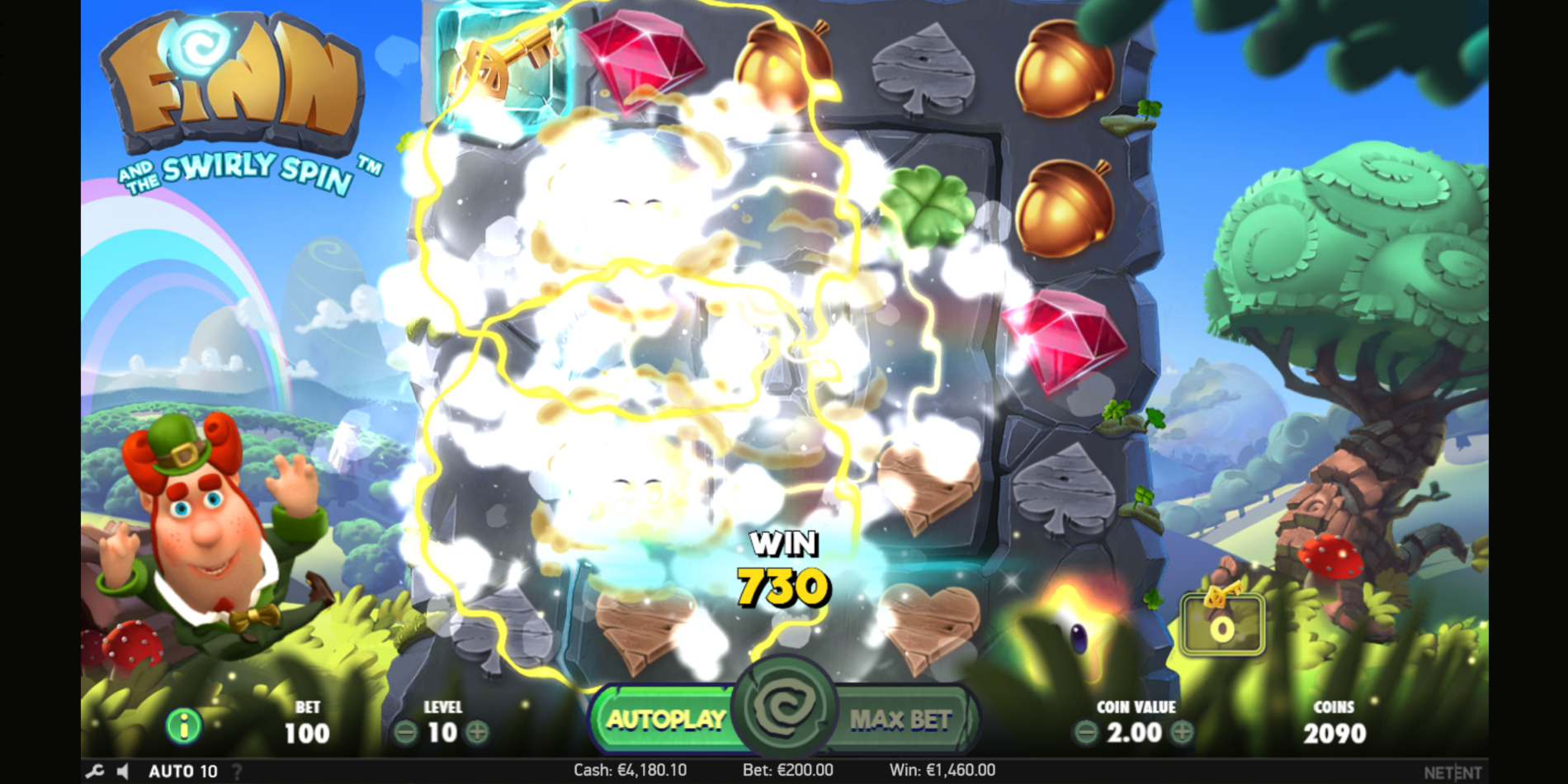 This slot brings a whole new layout to the slots industry. The game configures the reels in a swirling pattern emanating from a magical key. If you manage to hold onto the key until the end of the round, you will unlock the golden treasure and reap the rewards. Created by NetEnt, this is another one of their innovative ideas to liven up the world of slots.

Finn’s Spin is a 5 reels video slot game, but what’s unique is that it doesn’t play like most other slots as the pattern is spiral rather than horizontal. To get started, you have to hit the swirly button in the center of the control pad.

Don’t forget to set your bet before you start playing! To the right of the main button is the coin value setting, and to the left is the level meter. Here, you can set the coin multiplier for your spins. These combined will allow a betting range from atimy 0.10 to 200 coins in whatever currency you are using. 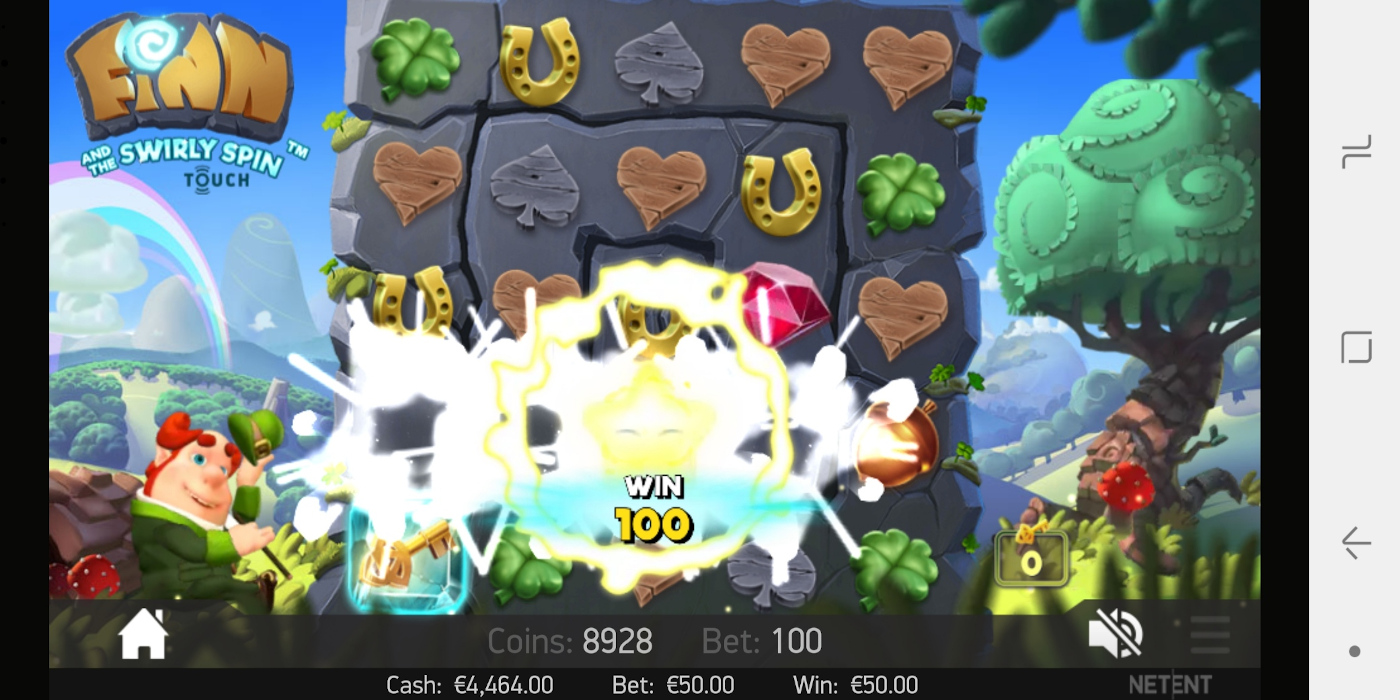 To understand the game, I would recommend checking the information button at the bottom-left corner of the screen. It will give you a clearer picture of what is going on in the Swirly Spin.

The game has 6 different standard symbols. The diamonds are the most valuable, while the spades are worth the least. However, there are 2 unique features in play, the Free Spin, and the Wild Symbol. Let’s see what is so special about them.

The Free spin symbol is quite different in this title. It appears as a key and is present throughout the game. In the case of successive wins, it will move towards the center, and when it reaches there, the gratis spin is activated.

These keys can be collected as you play, encouraging more prolonged periods of gaming. Once you have received enough of them, the Star Bar spin will be activated. Collect more keys, to see, Lava Lair, Golden Pot, and Lucky Mug activate. 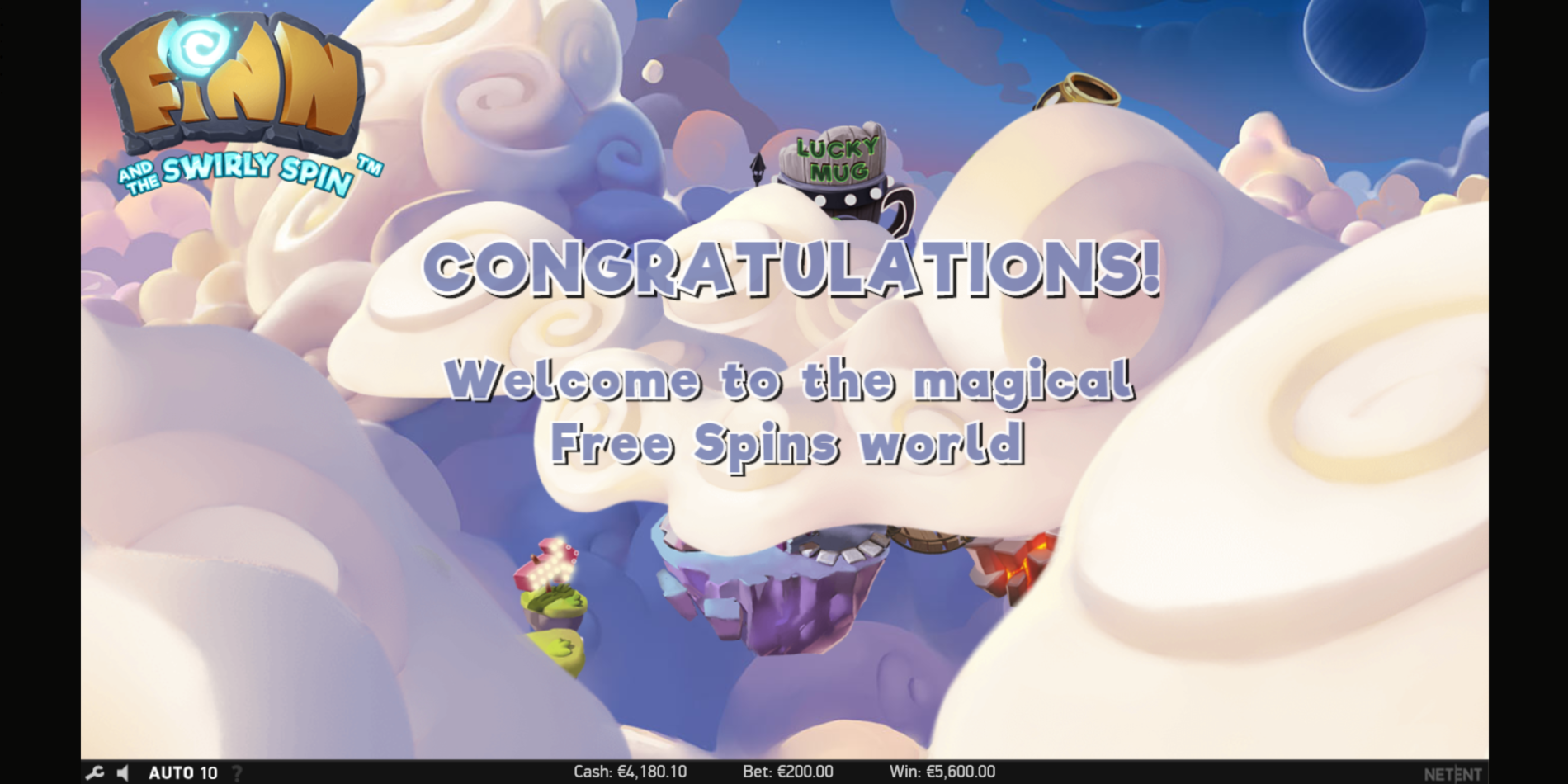 Wild symbols act a bit differently in this game. Hitting winning combinations will continue to generate more of them unless a win occurs with a Wild in it already. The standard Wilds appear as a star, but the Finn and the Swirly also include Sticky Wilds that appear as tokens with W’s on them.

What’s unique about Sticky Wilds is that they only appear during the Lava Fair. As suggested by their name, as long as the special is ongoing, the game will not remove them from play. Remember also that these symbols don’t destroy others, unlike the standard stars.

This game really stands out compared to most other slot games, with its beautiful graphics and tasteful pipe music. It starts with Finn the magical leprechaun dancing to a delightful tune putting you in just the mood for some fun. The background is visually mystical, with our hero playing a pipe and a rainbow way off in the distance, over lush green fields.

There’s a mobile version of Finn’s which you can easily download and play on the go. Also, before playing this slot for real money, you can try it in DEMO mode. 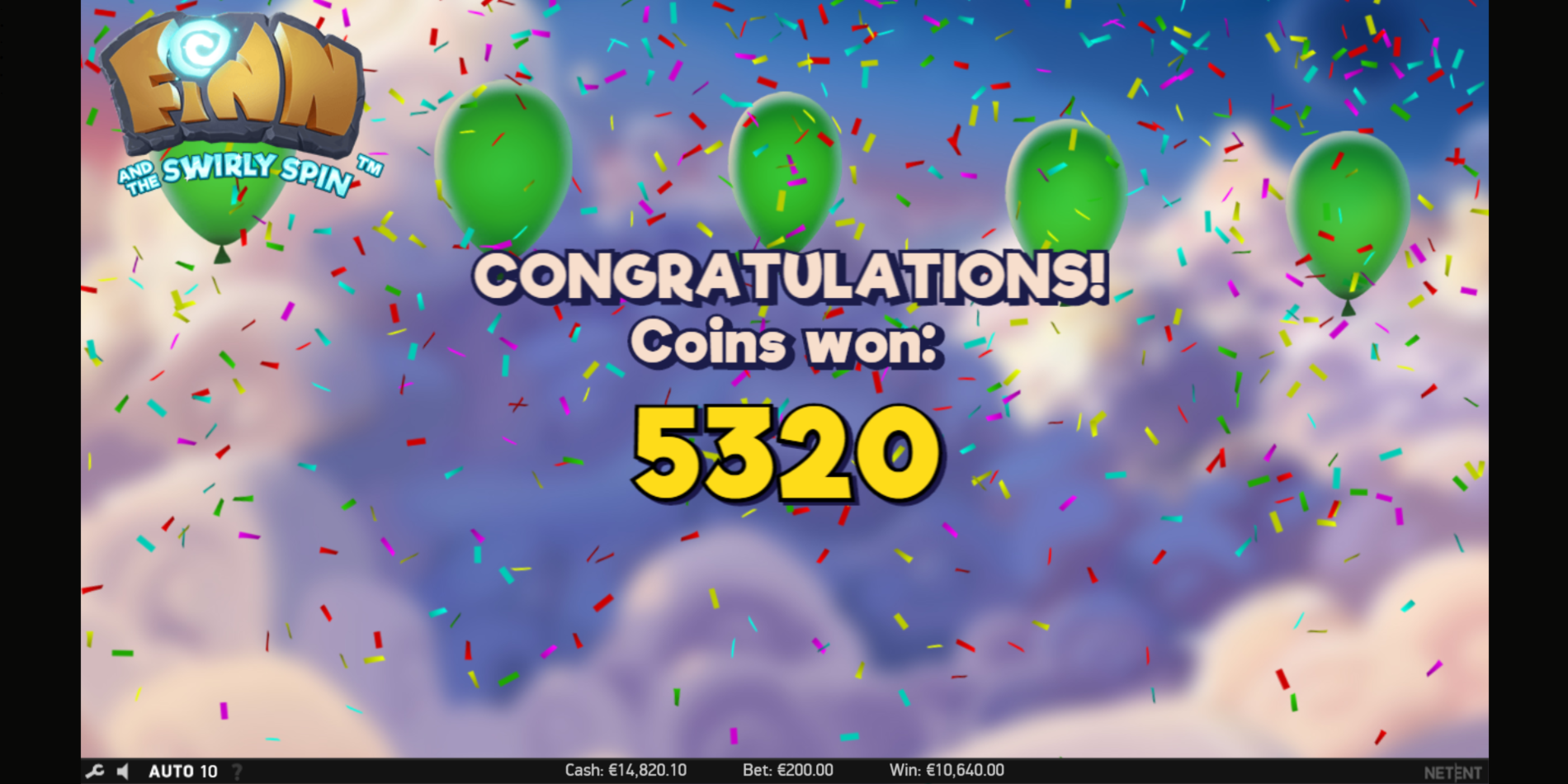 Another area in which this game excels is its extra features, consisting of The Starfall Wilds, the Dragon Destroy, Irish Luck, and Magic Transform. These happen at random intervals and really keep you on the edge of your seat.

The Starfall Wilds happens when 2 or 5 Wilds appear on the reels, whether in succession or randomly, and adds keys into the game. Dragon Destroy removes a random number of symbols on the reel if no win is made in any given round.

The Irish Luck feature adds another line of symbols when it activates. Finally, Magic Transform changes the lower-paying symbols, hearts, and spades into higher value symbols like the Diamond or acorn, securing a higher payout.

In Finn and the Swirly Spin slot from Netent, the Player return (RTP) stands at a decent 96.62%, which is just a bit higher than average. It has a low to medium volatility for those who like a lot of smaller wins. At the lower stakes, it can be an entertaining game; however, as you play the game, the chances of winning get progressively higher. 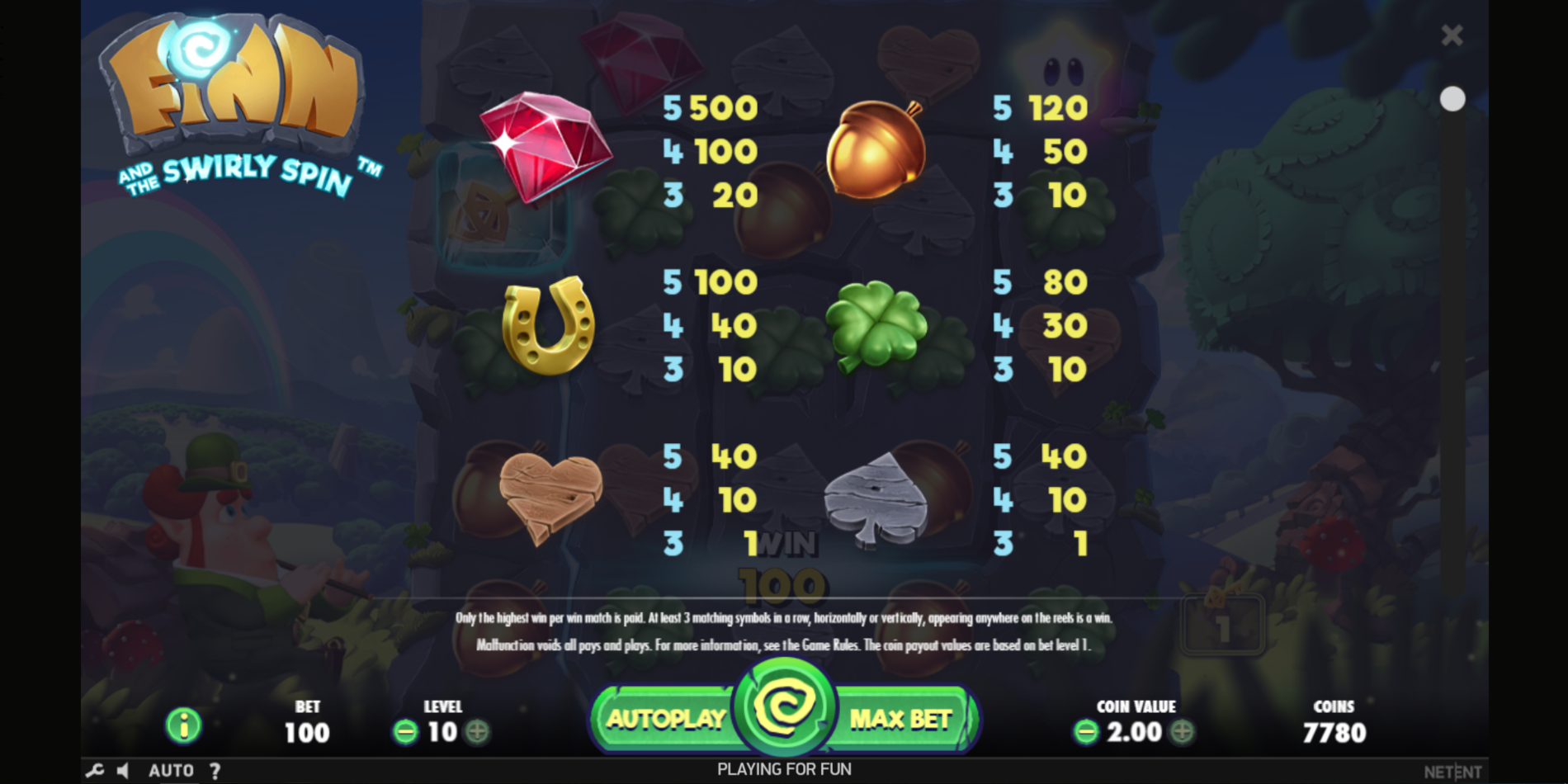 The overall average win for the game ranges between 30x through 70x the initial bet. However, on occasion, expect payouts upwards of 100x your original stake.

All information about NetEnt games Bet Limits and Winnings in this NetEnt casinos review.

If you are looking for big wins, this NetEnt slot isn’t the game for you. On the other hand, it might be just what you need for some chilled downtime play. With the low minimum wagers, Finn and the Swirly Spin slot is a very interesting game, and well worth a try.