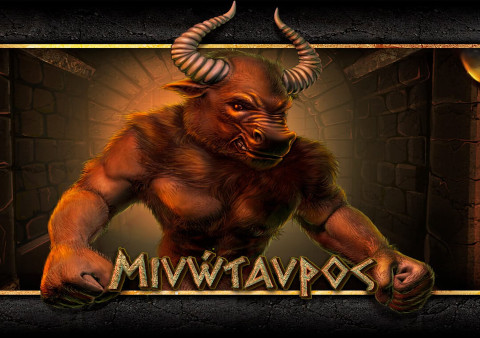 Minotaurus is a video slot inspired by Greek mythology from the Endorphina game provider. The 5-reels and 10 pay-lines slot centers on the legend of the Minotaur, the part-man part-bull mythical creature that lived in a maze.

❓ What is the Minotaurus slot RTP?

❓ What is the bet limits of Minotaurus slot machine?

❓ What is the maximum win on Minotaurus slot game?

Minotaurus features a maximum jackpot of 10,000 coins that can be won by landing the Wild symbol on the 4th reel.

❓ What are the special features of the Minotaurus slot?

Find out more about these features in this Minotaurus slot game review.

The atmosphere is very dark, and the high-quality animations and sound effects manage to keep you on your toes each time you hit winning combinations on the transparent reels. Behind the reels, the background shows the underground entrance of the labyrinth with two torches illuminating each side of the reels.

There are many other Greek mythology-themed symbols from the fable that complement the overall horror mood and haunting music. 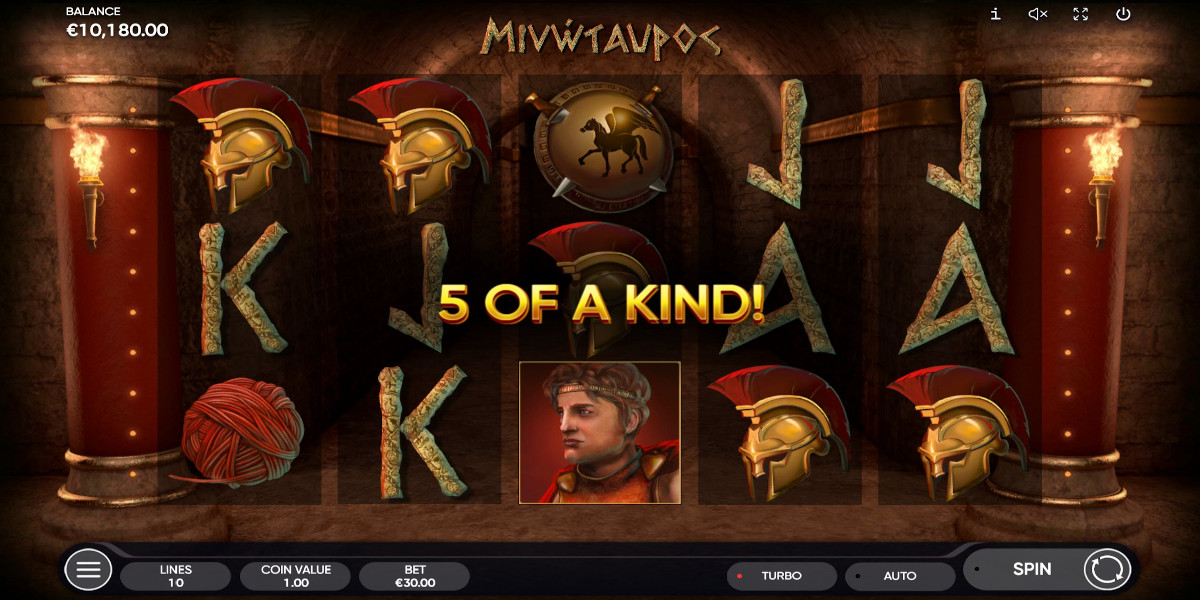 Players are able to enjoy the slot from their desktop, laptop, and mobile devices that run on iOS and Android.

When you first enter the game, you have to set your bets. You do this by pressing the “Coin” button set above the reels and choosing from a range of 0.01 to 1 per coin.

After this, press the “Bet” button to select how many coins you want per line, and you can choose between 1 and 10 lines by clicking on the “Lines” button.

You hit “Spin” to start the reels moving, but you can also use the “Auto” button to keep the reels spinning without interruption.

The Wild symbol is a bit different in this slot, as instead of covering just one symbol, it covers the entire reel. The Minotaur is the Wild symbol, and it can be used to replace any other symbol on the reels to make winning combinations. If the Minotaur lands on reels 2, 3, and 4, this will trigger the Re-spins feature.

When the Re-spins feature is activated, your winnings are multiplied based on the multiplier value. The multiplier value grows with each spin in which you do not make a winning combination. The re-spin bonus will last until you win a spin. 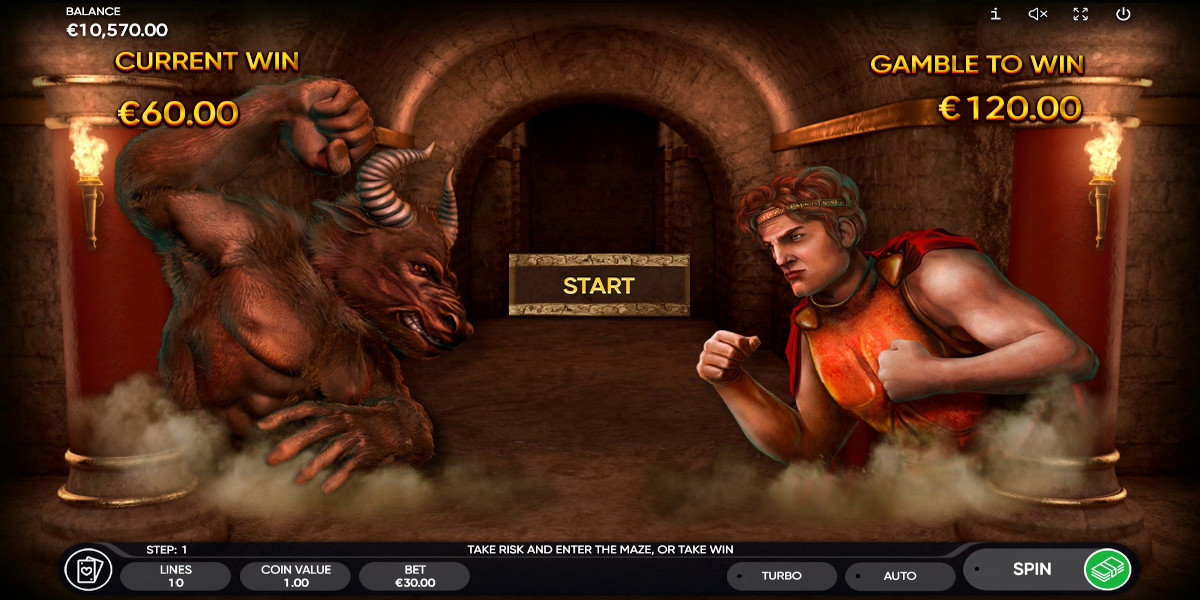 After a winning spin, you will have the “Take Win” and “Take Risk” buttons where the “Auto” and “Spin” buttons used to be. By clicking on “Take Win,” you collect your winnings and move on to the next spin, but if you click on “Take Risk,” you will be redirected to another screen where you can gamble your earnings to double them.

In this slot, the titular Minotaur acts as the Wild and Scatter symbol, which can be used to substitute all symbols. It will cover the entire reel when it appears, and the Re-spins feature will be activated. When you land winning spins during this bonus feature, your earnings will be multiplied based on the number of your multiplier.

The Minotaur will only land on reels 2, 3, and 4, and you can collect the highest payout when the symbol appears on the 4th reel. When you land the bonus, spin, the 3D graphics make the Minotaur angry, and it jumps and roars.

The other symbols that will land on the reels are all inspired by the Greek myth, featuring Theseus, Ariadne, the Labyrinth, the Red Ball of String, Helmet, and Shield. Typical card values are used as the lower value symbols, with their denomination starting with Jack and ending with Ace. 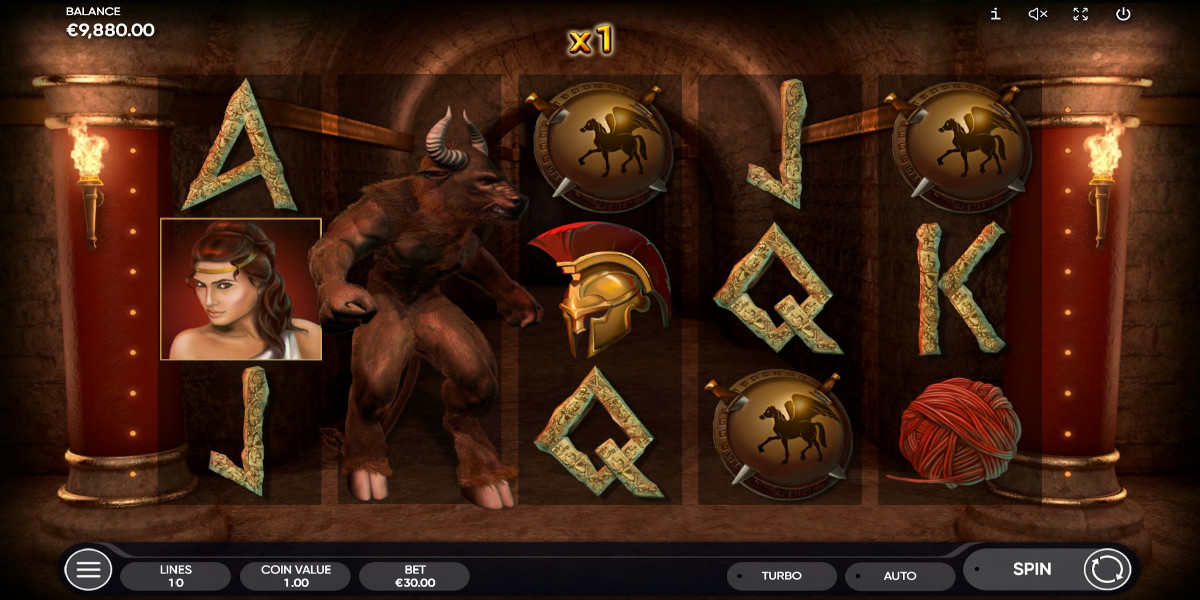 While you do not have a Free Spin feature in Minotaurus, there is a similar bonus that can be activated only when the special Wild card comes out from his labyrinth on the 2, 3, or 4 reels. This will prompt the reels to Re-Spin. After you play the bonus round, your winnings will be multiplied by a multiplier. The value of the multiplier increases with every spin that does not land a winning combination. The multiplier feature will also end when you make a winning combination.

When you hit a winning spin, you have the chance of doubling your wins by playing a game of risk. This Endorphina game involves you entering the maze, and if you meet with Ariadne, your prize will be doubled. Meeting the Minotaur in the maze will mean that you have lost, and all your credits will be taken away.

With 10 fixed pay-lines, you can wager up multiples of 10 coins on each spin. The maximum you can bet is 10 coins on each of the 10 lines, which would mean a maximum of 100 coins per spin. The coin value can be set anywhere between €0.01 and €1.

The wagering limits are convenient for both high bettors and budget ones, as you can go from a minimum of €0.10 to a maximum of €100 per spin.

In terms of payouts, the lowest paying symbols are the playing cards, which can earn you from 100 to 1000 coins. Landing Theseus on the reels can get you anywhere from 1,000 to 10,000 coins, depending on how many of these symbols you have on the reels.

The Ball of String and Labyrinth symbols have a payout ranging from 500 to 5000 coins, while the Shield and Helmet symbols can enrich your winnings with up to 1500 coins.

The Ariadne symbol will attract winnings between 1000 and 8000 coins.

Minotaurus features a maximum jackpot of 10,000 coins that can be won by landing the Wild symbol on the 4th reel.

The Minotaurus 3D casino slot offers a thrilling and hair-raising experience to adrenaline-seeking gamblers, where they can score big wins and take advantage of multipliers.