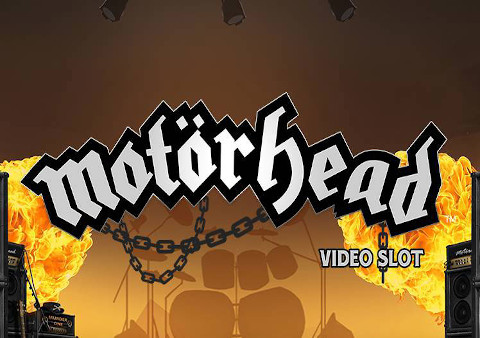 NetEnt is known not only for stunning graphics and innovative game features but also for the ability to bring legends alive. The company has released two stellar rock band inspired online casino games that music fanatics and slot lovers alike can’t get enough of.

This slot game has 76 paylines.

❓ What is the Motorhead slot RTP?

This slot game is rated as medium volatility level.

❓ What is the bet limits of Motorhead online slot?

This slot lets you gamble from the 0.20 to 200 EUR. Try Motorhead slot free play in DEMO mode.

❓ What is the maximum win on Motorhead casino game?

The biggest win you can find on Motorhead is 150x your stake for 5 of a kind Lemmy symbol.

❓ Is the Motorhead video slot has Free Spins feature?

✅ Yes! Find out everything about Free Spins features in our Motorhead slot review.

Motorhead is the next chapter in NetEnt’s rocking trilogy. The company responded to criticism from the ‘Guns N Roses’ slot by mixing up the format altogether. NetEnt also ensured to pack this slot full of unique features.

This slot is inspired by the legend that is English rock band Motorhead. The game places departed star Lemmy center stage as you watch bespoke animations and spin for a rockstar win from the crowd. Like any good show, this slot is full of surprises and thrills. You’ll be able to land Mystery Reels, stacked symbols, Free Spins, and a randomly activated Bomb feature. 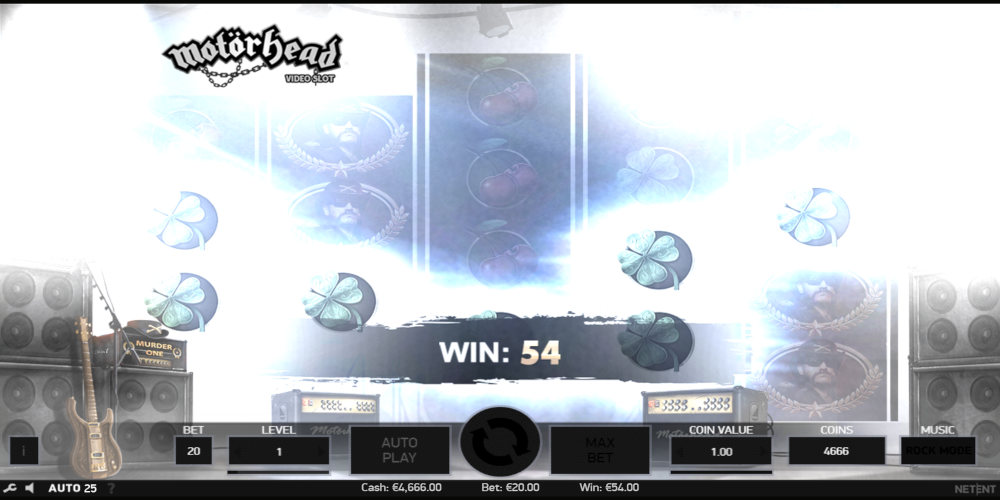 NetEnt has brought back the ever-popular reel format of hit slot Dazzle me in this rock-themed slot. 5 black reels are suspended in a pyramid shape over the Motorhead stage. The format starts with 3 rows on reel one and ending with 5 rows on reel 5. The interesting layout allows for 76 paylines to be in play.

Upon the reels, there’s a collection of band and old school online slot machine themed symbols. The lower paying symbols are represented by a four-leaf clover, cherries, and a lucky horseshoe. On the opposite side of the pay scale, there are red sevens, a silver bell, and a golden star.

Lemmy himself is the premium symbol that will pay out for just 2 on a pay line.

One or more Mystery reels will set ablaze and spin. When they come to a stop, the reels will be stacked with mystery symbols and standard symbols. Any mystery symbols will then transform to match the other symbols, hopefully creating a winning combination.

The second feature to look out for in the base game before a spin is the randomly triggered Bomber feature. The feature is appropriately named after the band’s 1979 album. You’ll know this is about to happen when the lights get low, strobes flash, and a motorbike engine roars with an air raid siren warning. The reels will then spin, and clusters of mystery symbols will bomb the board. They will then reveal themselves when the reels stop spinning. The possibilities for a 5 of a kind win here are through the roof with this feature taking over your reels. 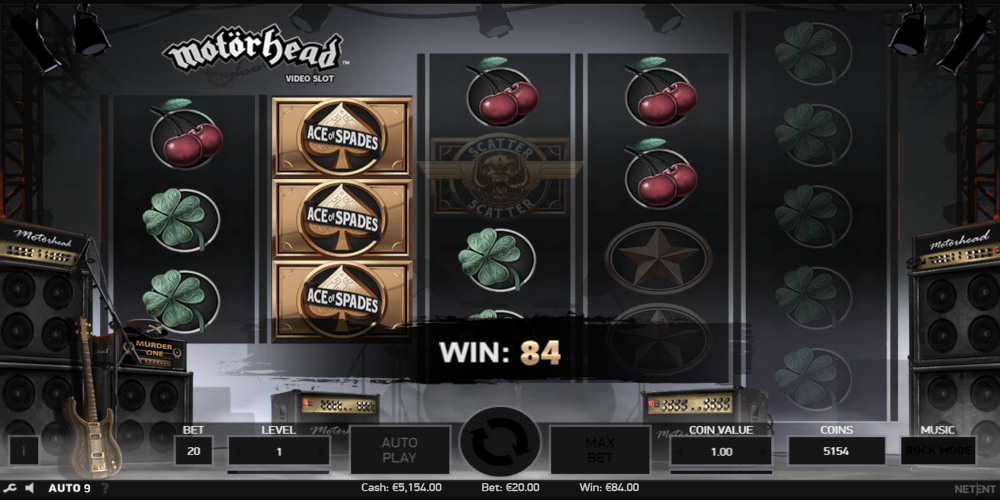 Don’t worry, NetEnt have not forgotten about the two stock favorite symbols no modern-day slot could be without. The Wild symbol is the Ace of Spades symbol paying homage to one of Motorhead’s most successful songs. It can substitute for all other symbols to create winning combinations except the all-important Scatter.

The Scatter symbol will land on reel 3 to 5 and activate 10 Free Spins. You must land 3 in one spin to trigger the feature. During the Free Spins round, the Mystery Reels are active after every spin. Unfortunately, the spins are not re-triggerable during the round.

Any Motorhead fan would be happy to see that Net Entertainment has pulled off this homage to the band beautifully. The slot boasts high-quality 3D graphics and vibrant symbols, captivating you in the scenery. The strobe lights illuminate the stage, and you can listen to 4 of the band’s most famous songs.

As you rock out to Ace of Spades, Overkill, Iron Fist, or Killed by Death, you’ll be able to enjoy a feature-packed base game. Adding a feature after every spin and a randomly triggered feature before the spins makes for an adrenaline-filled time. It also means that any misses can soon be turned into big wins, giving you a second chance at success. 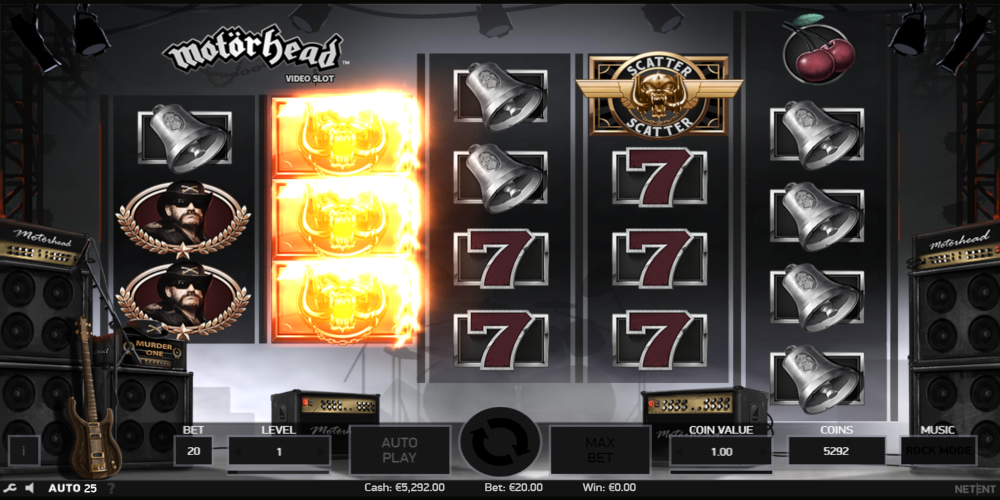 The pyramid reel format is a welcome sight that has proven to be popular since the innovative design hit screens in Dazzle Me. This mechanic alone makes it a stand out slot against the other music-themed titles.

Motorhead is a medium volatility slot with an RTP of 96.98%, around average for NetEnt games and on the market. The biggest win you can find on Motorhead is 150x your stake for 5 of a kind Lemmy symbol.

To buy your way into the Motorhead concert, you must pay a minimum of €0.20 per spin. If you’re living more like a reckless rockstar, you’re welcome to wager up to €200.

Motorhead is the final instalment in NetEnts rock trilogy, and it certainly doesn’t disappoint. It’s fast-paced, action-packed, and full of all of the designers’ best ideas. Yet, it’s still simple enough for any slot level to enjoy.

NetEnt is a legend in its own right when it comes to stunning graphics and releasing games that immerse you into the experience with their designs. Every inch of the game is focused on the theme. Each symbol is intricately put together to give you that ‘rock on’ feeling. 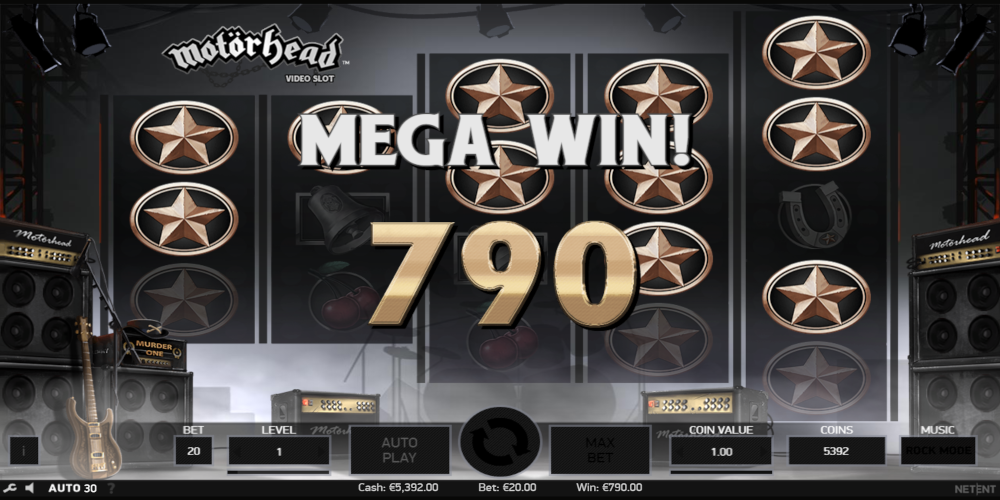 The only downfall to this slot is the low payouts. There isn’t much room for finding big wins here. Instead, you’re more than likely to accumulate lots of average wins reasonably often, making up the RTP. The generous wagering limit somewhat goes to balancing this out, and it can’t be denied that there are ample opportunities for you to land a win for free.

If you’re a rock fan, then you shouldn’t miss this slot. As the legend, Lemmy said, “If you like to gamble, then I tell you I’m your man.”