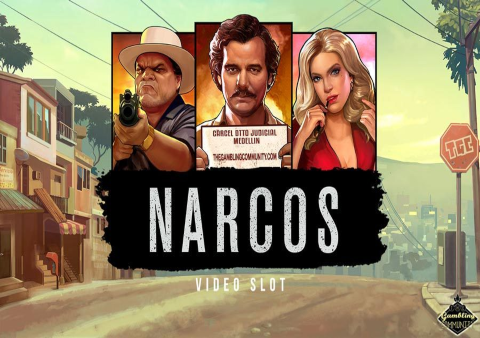 Narcos Slot game – How to play and Where to play?

Narcos slot is a 5-reel, 3-row video game developed by NetEnt and was released in 2019. NetEnt is a huge name in the casino slot world and is responsible for many other popular games like Gonzo’s Quest, Guns and Roses, and Starburst, so there’s a very good chance Narcos will become a new favorite for slot lovers.

If you’ve not already watched it or heard of it, Narcos is a hit Netflix TV series, so this slot already benefits from a strong brand. This character-based game is centered around drug lord Pablo Escobar and is essentially crime themed. It’s set in 1970s Columbia, so has a very retro feel.

That said, it’s appealing to a broad audience, specifically to fans of the show and any casino lovers. You can win money and hunt down Pablo Escobar.

Read on to learn more about this entertaining slot game, its symbols, features, and limits.

Narcos is available on desktop, mobile, and tablet, and the team has made the game look fantastic on all platforms. The game is easy to learn, being laid out across 5 reels and 3 rows. The background graphics are eye-catching and depict various familiar scenes from the TV series.

The toolbar shows the number of bets, level of play, autoplay, max bet, coin value, and coins total. The game works like most slots by selecting the coin value and hitting ‘spin’ to set the reels in motion. There’s also the usual autoplay function to play automatically.

Land the DEA badges, and Free spins will be generated. They will continue to increase if there are walking wilds on display, so this feature can run on for quite a while.

After activation, the player gets free coins. When three or more Pablos are landed on the same row, the lockup feature is triggered. Golden locked up symbols and additional features have 3 different benefits.

If players land Scatter symbols on reels one, three, and five in any position, they get ten Free spins.

The random drive-by feature, where a Cartel gangster fires bullets at the reels, turns high-value symbols into Wild symbols.

The wilds are very powerful, and they shift to the left on each spin but remain in place while still winning. This means the player is always incentivized to keep spinning. Addictive? Yes!

Both the good and bad characters provide exciting results, the Pablo Lock Up, and DEA Wild both bring significant potential wins.

Picture card symbols are the low-value symbols; – J has hand grenades, Q has an automatic rifle and bullet rounds, K has stacks of money, and A has a revolver. They pay 3x or 2x for 5 on a pay line,

Find out all about NetEnt slot games special symbols.

Narcos has a stylized appearance and feel. It’s not as violent as the TV series, so it’s suitable for a wider crowd.

If you’re a fan of the show, they have captured the theme of the TV series very well so it’s instantly recognizable. It’s not complicated yet shows the variation of characters and compliments the gameplay.

The entertaining but straightforward symbols draw your eye, and the gameplay itself is more interesting than most unbranded slots.

Extra touches make the game a lot of fun to play. For example, on the left-hand side of the screen, there is a phone booth. Occasionally this will flash, and if players click on it while it’s flashing, Pablo will talk.

There are traditional rules to follow in Narcos, and these seem to mirror other popular NetEnt games. Because of this, you will likely be able to play and win very quickly.

The game features an average RTP of 96.23%, and medium volatility. The chances of winning are average so it’s a good all-round game to play, and there are still decent odds for the bigger pay-outs.

You can bet anything from 20 coins to 400 coins per spin. The maximum win (coins) is 602400, and the most you can win is 1,506 times your stake. There are opportunities for larger pay-outs when the special features and symbols are triggered; however, one disadvantage of this game is that it doesn’t have a progressive jackpot.

Are you not sure which casino is the best for NetEnt casino games? Find out here 👈

Narcos by NetEnt visuals are incredible, and if you love the TV series and slot machines, this is definitely one you must play. There’s a lot of action in this game and the bonus features are excellent.

If you prefer not to part with your money initially, you can try the demo first, though the most exciting part is actually winning real money. Try it yourself and you’ll be amazed at how much fun it is to play.