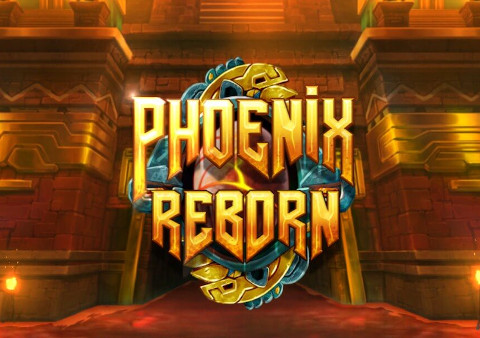 The Phoenix Reborn slot appeared on the gambling sites market in April 2019. Since that time, it has become one of the most popular and modern products of the Play’n GO provider.

The slot machine is based on 5 reels and 40 paylines.

❓ What is the Phoenix Reborn RTP?

The payout percentage RTP is 96%.

❓ What is the bet limits of Phoenix Reborn online slot?

❓ What is the maximum win on Phoenix Reborn video slot?

❓ What are the special features of the Phoenix Reborn casino game?

These features are exciting, and you need to read more about them in this Phoenix Reborn slot review.

You’ve probably heard the legend of the phoenix bird rising from the ashes. This story has been known since ancient times. In this game, the developers took this theme as a basis, linking it with the culture of the South American Indians.

You will see an ancient temple in the background. The game is accompanied by a pleasant soundtrack that will not let you get bored. The Phoenix Reborn is available not only on devices such as a computer, laptop, tablet but also in a mobile on mobile casinos version. You do not need to download the game; it works online as well. The slot is supported by operating systems: Windows, Linux, Apple, Android.

The Phoenix Reborn slot has a large playing field with 30 cells for symbols. Icons drop out on 5 reels and line up in 6 rows. There are 40 active bands, and their number is unchanged. Customers receive a payout if a continuous sequence of identical symbols is made on any of the 40 lines. The chain must start at the first column. There can be several of them in one round.

Winnings are calculated based on two criteria:

There is no doubling round. When you start the game, a splash screen with an animated demonstration of the possibilities of jokers and free spins appears first. The following inscriptions are used on the main screen:

Number buttons located under the reels are used to select a bet. There are the spin trigger elements on the right. Play manually or turn on automatic mode. A menu with sound settings and other options opens on the left. You can use accelerated spins.

The reels feature a phoenix, an Aztec princess, a warrior, a panther, an anaconda, a toucan and five stone signs. The main characters are stacked. The rest of the pictures are single.

The following elements are endowed with special features:

All prize options start automatically. There is no progressive jackpot in the Phoenix Reborn slot. This game is also available in a mobile version, so the game is suitable for those who like to gamble on smartphones. It supports any phone model on major platforms. The player can feel comfortable controlling the gameplay on the touch screen.

Before you start the gameplay directly, you will need to choose the size of your bet. To do this, use the buttons on the control panel. You can bet from 5 to 2500 coins for each spin in Phoenix Reborn. The group of low-paid characters in this game consists of a jaguar, a snake and a bird, as well as various ancient artifacts. They all have a different cost.

The payouts that can be obtained for them range from 25 to 375 coins. The high-value symbols are Phoenix, Queen, and Warrior. Combinations of them will bring you winnings ranging from 5 to 2500 coins. The payout percentage RTP is 96%, the level of volatility is above average. The minimum bet is 20 euro, the maximum bet is 100 euro. The line bet is possible in the range 0.005 – 2.5.

Phoenix Reborn slot by Play’n GO can be recommended for fans of impressive animation and Indian motives. Expanding Jokers, interesting Free Spins, unusual design and vivid graphics – these are the advantages of this game.