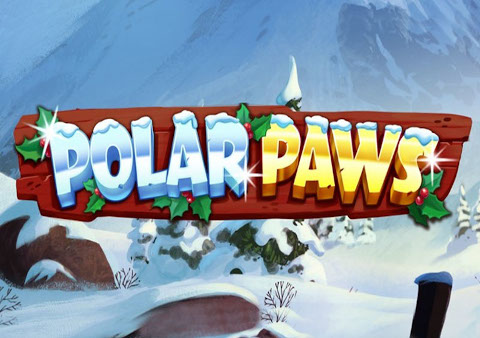 The famous developer Quickspin invites gamblers to celebrate the New Year holidays in the company of polar bears. The family of funny polar bears from the Polar Paws video slot will cheer you up and give you the opportunity to compete for very large slot machine payouts that can be received in a variety of ways.

What do people ask about the Polar Paws slot machine?
❓ How many paylines have Polar Paws casino game?

This slot game has 5 reels and 25 paylines.

❓ What is the Polar Paws slot RTP?

Volatility of this online casino game is ranked as medium.

❓ What is the bet limits of Polar Paws video game?

❓ What is the maximum win on Polar Paws online video slot?

The maximum win is 819x your stake. It is not very impressive. However, most players will be satisfied with frequent small wins that will fall out throughout the game process.

❓ What are the special features of the Polar Paws online slot?

The slot game has very exciting features. Find out more about all of these in our Polar Paws slot review.

Feel the fabulous magical atmosphere of Christmas, and get the most real Christmas gifts any day, regardless of the season outside the window. This opportunity is provided by the Polar Paws slot machine from the Swedish company Quickspin. The design of the developer’s first Christmas slot takes the player to the North Pole, home to a cheerful family of polar bears and a generous elf who gives out gifts while Santa Claus rests. The feeling of joy and celebration is enhanced by the musical accompaniment of the game.

The Polar Paws online slot machine has a traditional interface: 5 reels, 3 rows of icons and 25 lines for paid combinations. Clients can place equal bets on all lanes. The number of lines does not change. You can bet from one cent per position (at least 25 cents per spin). The maximum bet per round is 100 euros. The slot machine uses basic icons, jokers and Scatters with unusual additional functions, and repeated spins with bonus options.

The rules for the formation of winning chains are classic: the same symbols must line up from left to right on any of twenty five lines. Numerous sequences are allowed in the same spin, but they must be formed on different lanes. Payouts are determined by multiplying 2 parameters: the rate and the odds. The multipliers are indicated in the table attached to the game. There is no doubling round.

Starting to play Polar Paws, the user finds himself in a snow-covered meadow, where various game symbols are located. The most common symbols are card symbols, combinations of which give the player a multiplier of 0.08 to 3 (10, J and Q) or 0.2 to 4 (K and A). A meeting with members of the bear family promises more generous payments to the player:

Acquaintance with the bears’ neighbor – an elf – can bring an equally valuable gift. As a Scatter symbol, the little wizard is able to trigger a streak of 10 Free Spins. All that is required for this is to meet simultaneously 3 elves on the playing field. Wild symbols are the active helpers of the player in this Christmas slot machine:

A festive atmosphere reigns on the screen, reminiscent of New Year’s bustle, gifts and fun. Behind the drums is a room littered with sweets: staff-shaped lollipops, gingerbread men, and so on. When you launch Polar Paws online casino game, you will see four bears: dad, mom, teenage son and baby. Also on the reels there are beautiful letters denoting cards from ten to ace. Icons are not stacked.

The special characters are:

There is no themed bonus game. No special skill or manual dexterity is required in bonus rounds. The result depends only on the random number generator.

Free Spins – 10 Free Spins start. They go to the institution’s loans. The bet remains the same as in the previous round. A scale appears on the right side of the screen. Each time an elf appears on the screen, the level rises one point. When the counter reaches the images of bears, they become Wilds until the end of the free spins. This option is called Bears Turn Wild.

The Polar Paws mobile casinos slot is available on any modern smartphones. It supports all non-outdated gadgets on the most common platforms. The rules of the mobile slot do not differ from those of the desktop version. The interface has some differences, but they are not significant. It’s just that the buttons are located so that it is more convenient to use them on touch screens.

The Polar Paws slot has 25 fixed pay lines. With each spin, you can play from 25 cents to 100 euros. Since the slot is dedicated to Christmas, the developers from Quickspin decided to make it as “kind” as possible by setting medium volatility and a fairly high return rate (96.84%). The maximum win of x819 is not very impressive, but most players will be satisfied with frequent small wins that will fall out throughout the game process.

The game is good in every way. It’s colorful, fun and comfortable. Undoubtedly, it will help create a festive mood and will appeal to many regular players. Pros:

An additional gift of the slot is the Bears Turn Wild option. To activate it, you must fill the cells to the left of the game reels. The cells are filled upon meeting the same generous elf. As soon as the container is full, one of the bears becomes a wild symbol, thereby increasing the size of the prize received. When filling two containers, two members of the bear family become wild, three – the rest.