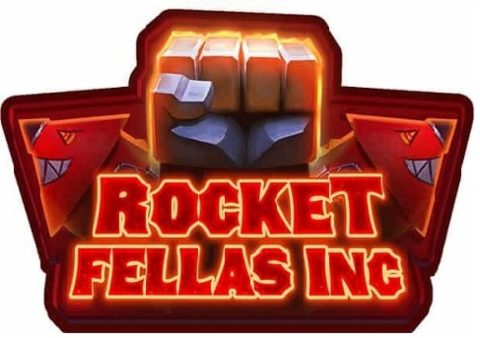 This explosive mining themed slot by Thunderkick comes with 5 reels and 30 paylines. This is a definite stress reliever because here you can blow things up and be rewarded with the Rocket Feature which sees Rocket symbols transform into Wilds and Barrels becoming Wilds if they are on the same reel.

This slot also comes with a Bonus Game Feature meaning you could be playing Rocket Fellas Inc slot game with up to 40 Free Spins and further benefit from Sticky Wilds and Wild transformations for some explosively huge wins. 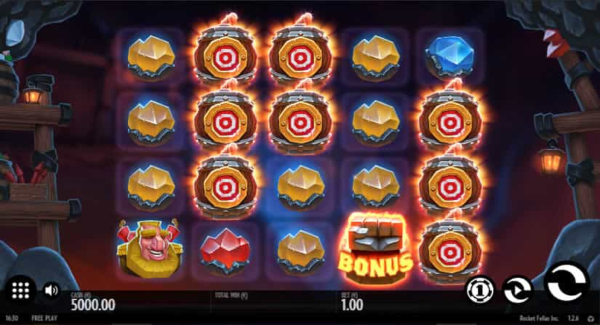 Rocket Fellas Inc by Thunderkick can be played for $0.10 to $100 per spin, and this slot can be played on your desktop and all mobile devices. The games RTP is 96.10%.

Symbols to Blow your Mind

The Symbols on the reels of Rocket Fellas Inc include 4 shiny rocks and 4 Rocket Fellas. There is also the Barrel symbol, and this symbol is one of the most lucrative of the symbols giving you 30x your stake for landing 5 across a payline.

The Mining Cart filled with the shiny rocks is the Wild Symbol and substitutes for all the other symbols excluding the Scatter Symbol. Five Wilds will reward you with 30x your bet.

When the Rocket Symbol appears on reel 1 it always transforms into a Wild. Should you land a both a Rocket and a Barrel Symbol on the same row, the Barrel as well as all the other Barrels will transform into Wilds and you have blast off as this is known as the Rocket Feature. 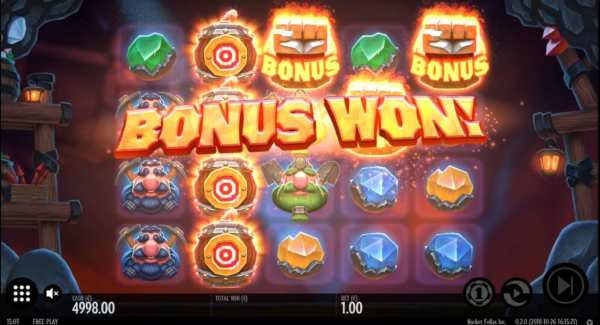 The Bonus Game is one of the main attractions, and this playing when 3 or more Iron Fist Symbols appear concurrently on a base game spin, if you land 3, 4 or 5 you will be rewarded with 10, 15 or 20 Free Spins. During the Bonus game keep an eye out for between 2-5 bonus symbols appearing as you could then receive additional Free Spins of anything between 3-20, meaning you could land up with 40 Free Spins to keep mining with in the hope of striking Gold.

During the Bonus Game Feature, a rocket and barrel can appear on the same row and as previously discussed trigger the Rocket Feature, however the Barrel transforms into the Sticky Wild Symbol as opposed to a Wild in the base game. The rewards don’t end here, there’s the Hot Reels Feature, and that’s where the Barrels on the same reel as the Sticky Wilds transform into Wilds enhancing your winnings.

This new Slot by Thunderkick may not come with a Progressive Jackpot it does have a respectable max win of 7325x your stake which is an impressive sum should lady luck be shining on you. The games features are also exciting with their Wilds, Sticky Wilds galore and Rocket Feature all beneficial to you as a player, and the gameplay is straightforward, so you can get down to basics and enjoy this unusual mining themed slot. 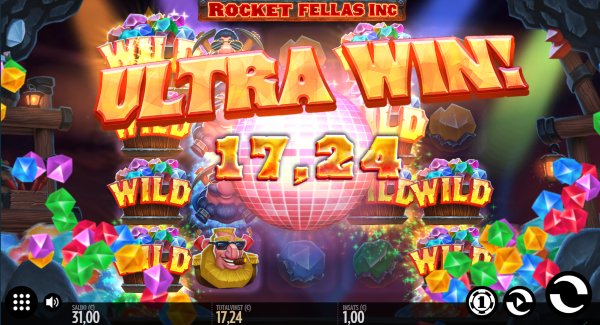