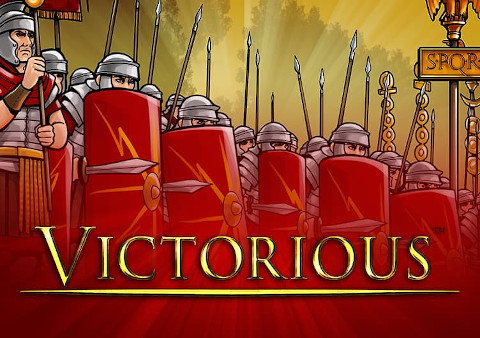 Victorious slot machine is a Roman-empire themed video slot with 243 ways to win. It’s brought to your screens by Net Entertainment.

Victorious will catapult you back to the ancient Roman times, where gladiators ruled the Coliseums, and you weren’t declared victorious until you fought your competitors to the death.

❓ What is the Victorious slot RTP?

Victorious slot game is a high variance game and is set at an RTP of 96.88%.

❓ What is the bet limits of Victorious slot?

You can battle it out to become a victorious gladiator for as little as €0.25, and if you’re feeling up for more of a risk, then you can wager up to €125 💰

❓ What are the special features of Victorious slot machine?

This video slot game has:

❓ Is Victorious slot game has Jackpot?

✅ Yes! The Julius Caesar symbol plays a separate yet lucrative role within the game. It does not trigger any unique feature, but instead, landing 5 of this famous military general will reward you with a 1500 coin Jackpot.

If you’re a fan of ancient history, high variance, and hundreds of ways to win, then Victorious needs to be at the top of your must-play list!

It’s time to step back in time, so put on your armor, choose your weapon and let’s see if you have what it takes to walk away victorious. Look out for those all-important special symbols to help you on your way to being a champion gladiator. 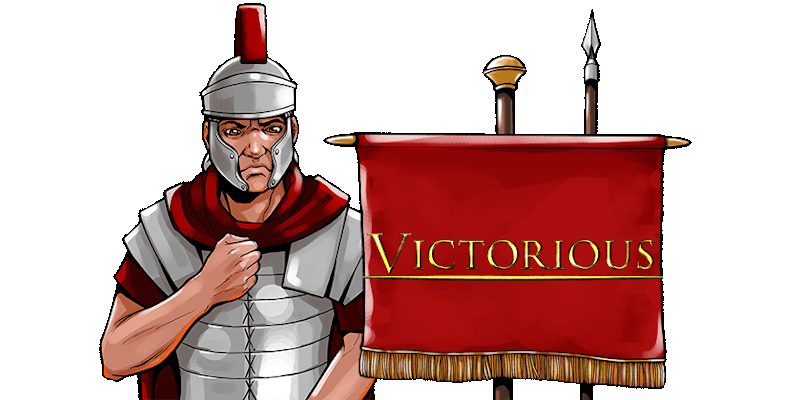 Set among the hustle and bustle of a busy ancient Roman coliseum are 5 reels and 3 rows surrounded by gladiators and guardsmen. You will be transported through the ages with the intense and dramatic soundtrack that makes you feel instantly a part of the action.

Upon the reels, you’ll see some familiar faces such as Julius Caesar and a host of other gladiators, centurions, and Roman figures. The colorful character tiles represent your high-value payouts. The more plain card style letters and numbers are the lower value symbols.

The most important symbols to watch out for in Victorious are the Golden Eagle and the Golden Wreath. Anything Golden in ancient Roman times shouts wealth and power.

Victorious has stayed true to a more traditional style of video slot gaming. Offering players only 4 regular slot features throughout the game. These include Wilds, Scatters, Multipliers, and Free Spins.

The Golden Eagle symbol depicts the Wild symbol. It has the ability to substitute for all other symbols during the base game and the Free Spins feature. Typical of any video slot that holds a Wild symbol nut here, it can even replace the Scatter.

The Golden Wreath represents the Scatter symbol and is what the entire game is based around. Collecting 3 or more across the reels from left to the right will activate the Free Spins feature. You will know precisely when you have achieved this as the scenery will change to the Gladiators battlefield. Here, the fearsome characters are up in arms and ready for a fight to the death.

The amount of spins you have to play with depends on the number of Scatters that triggered the feature. For example:

Also, to make the spins even more lucrative, you’ll be awarded between 5 and 50 times your stake, depending on how many Scatters activate the feature. Plus, all-cash wins will incur a 3x multiplier, and a cash prize just for triggering this feature will be gifted to your account balance.

The Julius Caesar symbol plays a separate yet lucrative role within the game. It does not trigger any unique feature, but instead, landing 5 of this famous military general will reward you with a 1500 coin jackpot. He’s a little elusive, however, but wouldn’t you be if a gang of angry senators was after your head?

Players may be a little underwhelmed when first loading Victorious, even surprised at the lack of features incorporated into it from a powerhouse of innovative design such as NetEnt. However, what NetEnt has done is to create a traditional style game with an intricately detailed theme. Focusing on a Free Spins feature that boasts high variance.

If you enjoy huge payouts and are prepared to fight for one like a true gladiator, then Victorious is the perfect spin and win slot for you. With 243 ways to win, NetEnt takes on pay lines within this video slot and has hidden some serious cash within the Free Spins reels.

Overcomplicating this game would bring the variance level down, and also make for a chaotic and possibly unsightly gaming experience.

The inclusion of a jackpot symbol is a welcome addition that makes you feel like big money can land with ease on your reels at any given moment. It adds yet another element of suspense and that fun frustration of being so close.

As previously mentioned, Victorious slot game is a high variance game and is set at an RTP of 96.88% around the top end of the market average. 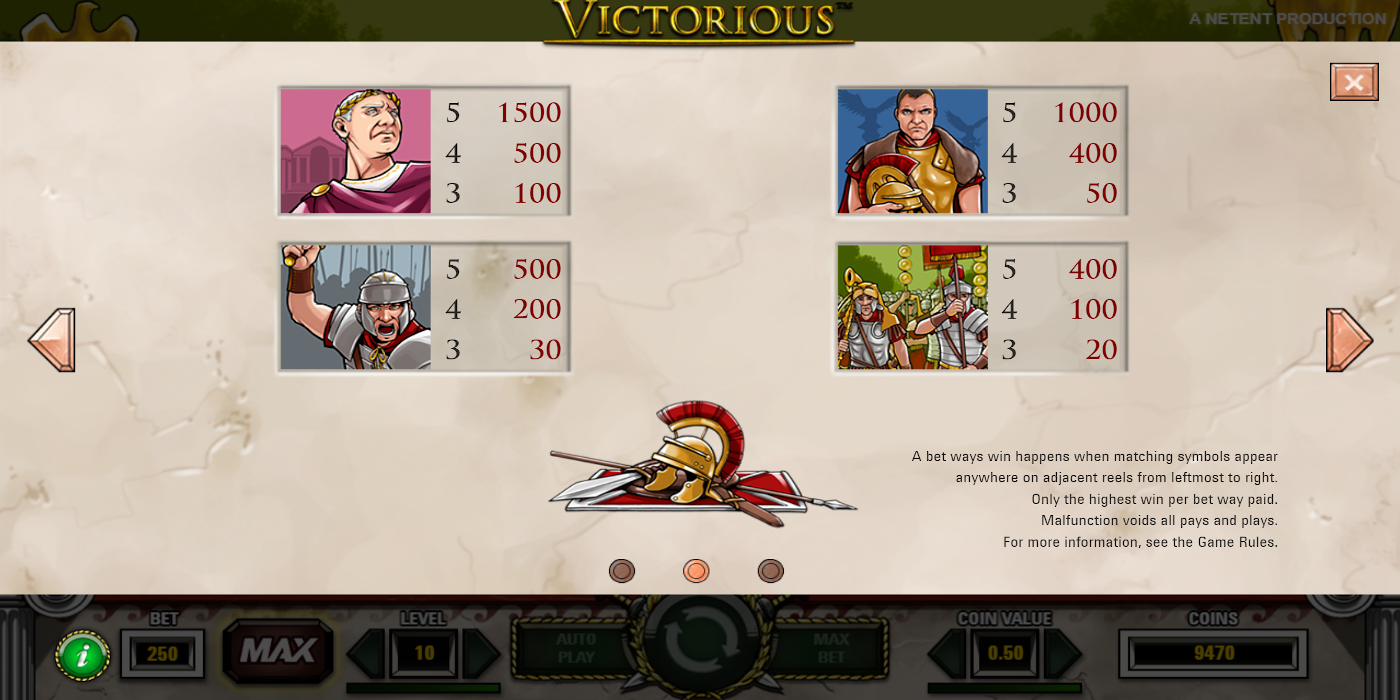 You can battle it out to become a victorious gladiator for as little as €0.25, and if you’re feeling up for more of a risk, then you can wager up to €125. Players can place multiple coin bets on each spin with a limit of 10 each turn.

These betting limits allow for Victorious to be accessible for all budgets. They are still high enough to please the high rollers that want to play with some serious money on the line.

In total, there are 243 ways to be victorious. You can expect winning offers like x3 multiplier, 50 times your stake, and a 1500 Jackpot to get your hands on before coming back to the present day.

Truthfully, Victorious slot isn’t going to be everyone’s cup of tea. Many players today are used to and prefer a more complex and feature-rich style for gaming from NetEnt especially. Plus, many slot lovers who lay for fun enjoy small but frequent wins over practicing patients for larger payouts.

It should by no means overlooked, however. It’s visually captivating and almost cinematic in design. NetEnt has obviously done homework on the ancient Roman period. They proved it in the meticulous detail they have included to portray this period in history. 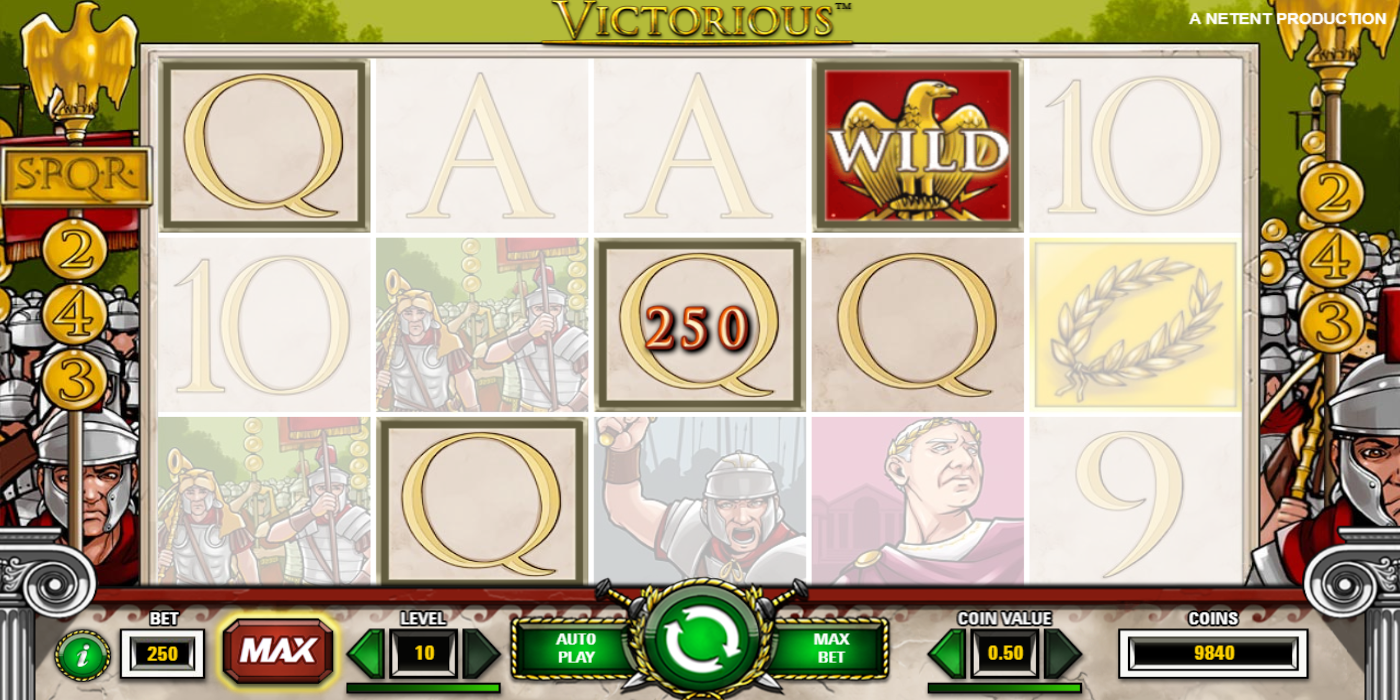 Nevertheless, the traditional slot features will still appeal to many slot fans out there that can’t get enough of Wilds, Scatter, and Free Spins. Plus, with generous multipliers and a jackpot up for grabs, you’d be foolish not to give it a spin.

If you’re a history buff and are searching for a Big Win, then it’s time to play Victorious slot machine.