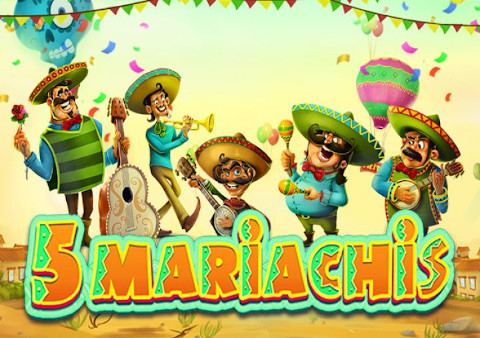 We present to your attention a classic slot in the Mexican style. 5 Mariachis is a game released back in 2017 from the game manufacturer Habanero. The game is based on the motives of the Spanish Fiesta and the Mexican festival of the dead.

The game consists of 5 reels and 25 paylines.

❓ What is the 5 Mariachis slot RTP?

❓ What is the bet limits of 5 Mariachis slot machine?

❓ What is the maximum win on 5 Mariachis video slot?

❓ Is the 5 Mariachis slot game has Jackpot?

✅ Yes! Find out more about 5 Mariachis slot jackpot feature in this review.

The slot is made in the classic 2D style, the symbols are drawn brightly and clearly. Mariachi is translated from the Spanish language as musicians, which is why the attributes in the slot belong to a holiday, along with musical instruments and Mexican decorations.

This is almost a classic slot that does not offer particularly large jackpots. A player can hit a real jackpot if he is lucky to get an additional package of Free Spins.

The game consists of 5 reels and 25 paylines. The rules of the game are as simple as possible. The player sets the bet size using the “+” and “-” buttons. After setting a bet, the player must determine the size of the coin and the bet on the payline. A gambler can also bet on several paylines at once. Moreover, it will increase his chance of winning. As in all standard slots, in this game, the size of the moment can vary from 0.01 to 20. Also, the player has the opportunity to press Max Bet in order to immediately set the maximum allowable bet amount.

Also for the convenience of the game, the gameplay has an Auto Play button, clicked, the spins occur by themselves, without the participation of the player. At the top of the gameplay is the sum of the jackpot that the player has already won. The slot is also available in the demo version, that is, you can play without making bets in real currency. The game and after is filled with special symbols that form winning combinations.

After the player has set all bets on the payline, he can finally press the Play button and put the reels in motion.

The skull symbol serves as a scatter in the game. It brings the player winning bonuses that will be multiplied by the player’s existing winnings. A symbol can give such bonuses if three symbols appear next to it on the panel at once. also, if 3 Scatters symbols appear next to each other in one game, then the player will receive 15 Free Spins. If a player displays a senorita symbol with this function, then all the symbols on the panel during this function accidentally change to a senorita symbol. Moreover, a symbol with the image of a girl appears exclusively during Free Spins, and she can send kisses during spins.

The function with Free Spins can be re-started, and even for the third time, and gives the player the opportunity to get 30 and 60 Free Spins. In order to restart the function, you just need to re-assemble the three skull symbols together on the game panel. Scatters should appear on reels 2,3 and 4 in order to activate the bonus game function.

Another unique symbol is the Piñata symbol, which, when collecting the same three symbols, gives access to bonus rounds. Three of these symbols open the bonus game and start multiplying the player’s winnings up to a hundred times.

Despite the fact that this is a video slot in a classic version, it is a game with a progressive jackpot that can be multiplied an indefinite number of times. Thanks to the Piñata Pick function, a player can multiply his winnings x2 or more.

In addition to all the main characters, the game also has symbols of guitar, pepper, and maracas. They, in turn, can also multiply the player’s winnings by multiplying from 12 to 350 by the player’s original bet. These symbols are also relevant in bonus games.

The slot also offers a multiplier function that can double and triple a player’s existing winnings.

On only 25 paylines, a player’s jackpot can be in an unlimited amount due to the progressive nature of the slot.

The slot animation is also special, which occurs after the player starts the bonus game. The symbol of the Mexican Senorita begins to give out virtual kisses.

Another feature is that the player can launch the free game function an unlimited number of times. Thus, in one game, the gambler can get from 15 to 60 and 80 Free Spins. At the same time, the game can be switched to auto-play mode, which allows you to rotate Free Spins automatically, without constantly pressing the Play button.

A player can bet no more than 10 coins on one payline. And the minimum is only 1 coin. At the same time, the size of coins varies from standard 0.01 to 20. The maximum gain that a player can get is not limited since this is a game with a progressive jackpot.

RTP of the slot is 96.67%, and this is a standard indicator of the percentage of winnings in progressive jackpots.

The lowest bet you can bet on the game in the currency is 0.25€. Even such a bet can be increased by 50 or even 300 times with the help of the opportunity to get a large number of Free Spins.

Despite the opportunity to get many Free Spins, getting mega wins several times in a row is extremely difficult, so after receiving three or four bonus games, an interesting game ends for gamblers.

In order to get the maximum win, players are advised to make several bets on several paylines at once.

If you are a fan of Mexican culture, then this Habanero slot is for you. Interesting and unusually traced symbols and of course the progressive jackpot, which cannot but rejoice. The game has a convenient control panel and interesting animation when the player gets the opportunity to play the bonus game. The pleasant uniqueness of the slot lies in the endless opportunity to receive Free Spins, and thereby multiply your wins. The advantages of the game are the ability to play in the demo version and the instruction of the game in English. Therefore, if you are close to the theme of a fiesta, Mexican culture and you are a fan of getting more Free Spins, then you should definitely try to play this game.