Blast off into space and navigate around the myriad of space-themed slot machines before docking here with one of the best. You’ll join the ranks on board of an alien military ship, ready for a battle in space against five 3D animated extra-terrestrial species. 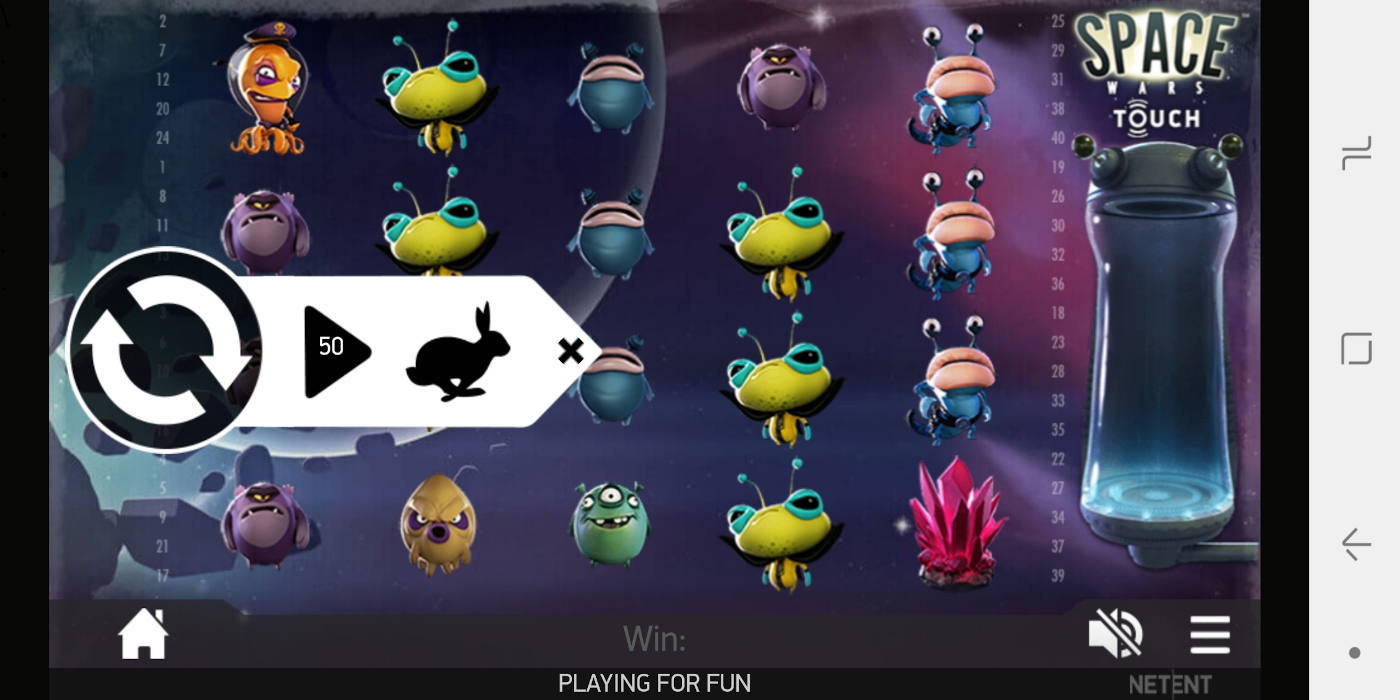 The war is raging over the lucrative crystal that everybody wants to get their hands, paws, tentacles … on. It’s up to you to not only win the battle but also win this war.

Space wars is a relatively simple game mechanically with not much more than you see in front of you. Played across 5 transparent reels, it has a huge amount of paylines with a total of 40. The paylines run from left to right.

On the board, you’ll see 5 different 3D alien species and the lucrative crystals floating in space that represent your symbols. Behind them is a serene but slightly eerie backdrop of outer space and distant planets. To the right of your reels is the all-important Cloning Pod, the focus of the entire game’s mechanics.

It works by teleporting any winning combination found on the pay lines into the Cloning Pod. The winning symbols then get cloned and are fired back out onto the reels before the reels are Re-Spin for free.

By doing this, you could potentially be led into a chain reaction of clones and respins that see your coin counter going up and up. Due to it being the focus of the game, the Cloning Pod feature is triggered very often. 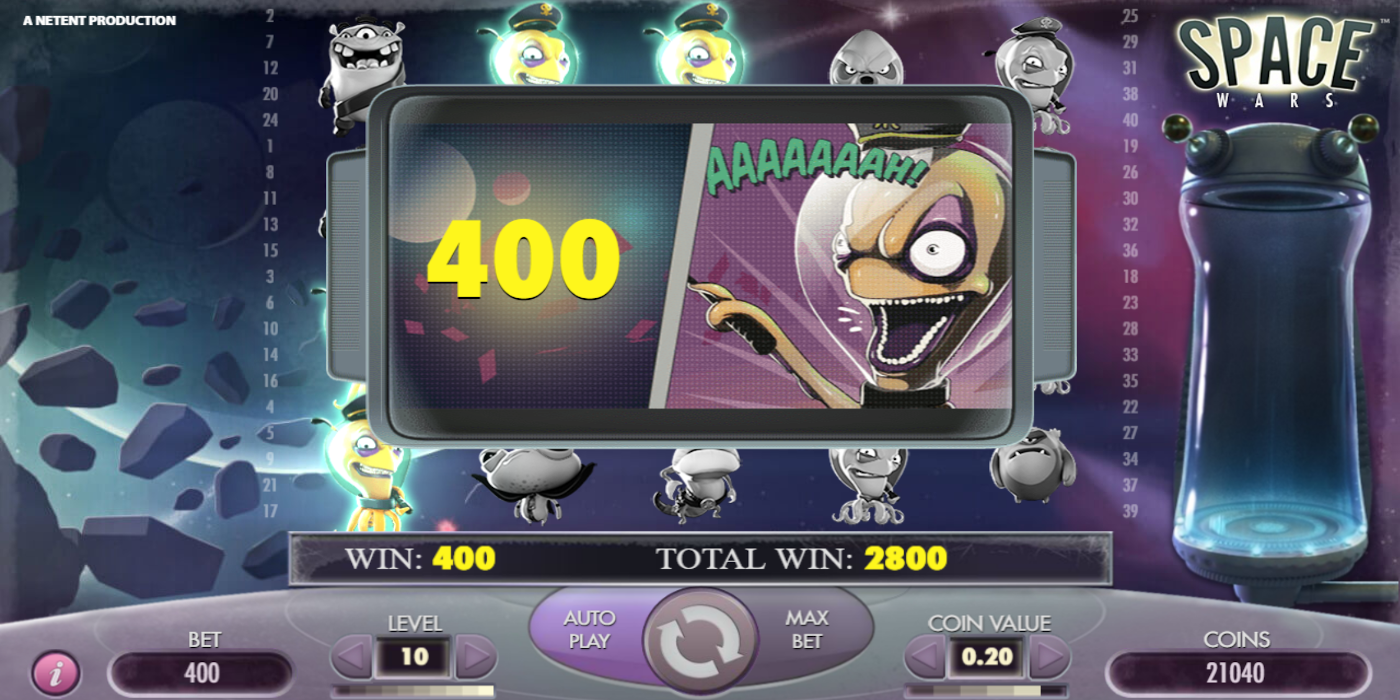 To spice up the action a little, NetEnt has included some interactive features with Space Wars. Firstly you can use the Skill Stop button to stop the reels spinning in their tracks. This allows the player to feel more in control of their destiny, adding an element of skill into the gameplay. It also means you can speed up the spins if you want to send this video slot into hyper-speed.

Another Handy trick NetEnt has included is the ability to view mini pay tables by hovering over the Alien characters. Here you will be able to see all possible ways to make those 40 paylines.

Like many NetEnt games, they have included an auto spin option which will continually assign the reels for you and place your chosen bets up to 1,000 times. This is great if you want to sit back and watch the action unfold. However, it’s a little risky if you’re on a tight budget and forget that the auto spin is in play when you nip off to make a coffee.

Other than the Wild Symbol represented by the word, there isn’t much else to the game symbol wise. The weirdly cute alien figures are generously stacked and can create stacked blocks to make big winning combos.

The Wild symbol will appear on your even-numbered reels 2 and 4 and substitute for any other symbol creating winning paylines. Wilds are also stackable, and you may even be able to stack entire reels and rows to cover multiple paylines. 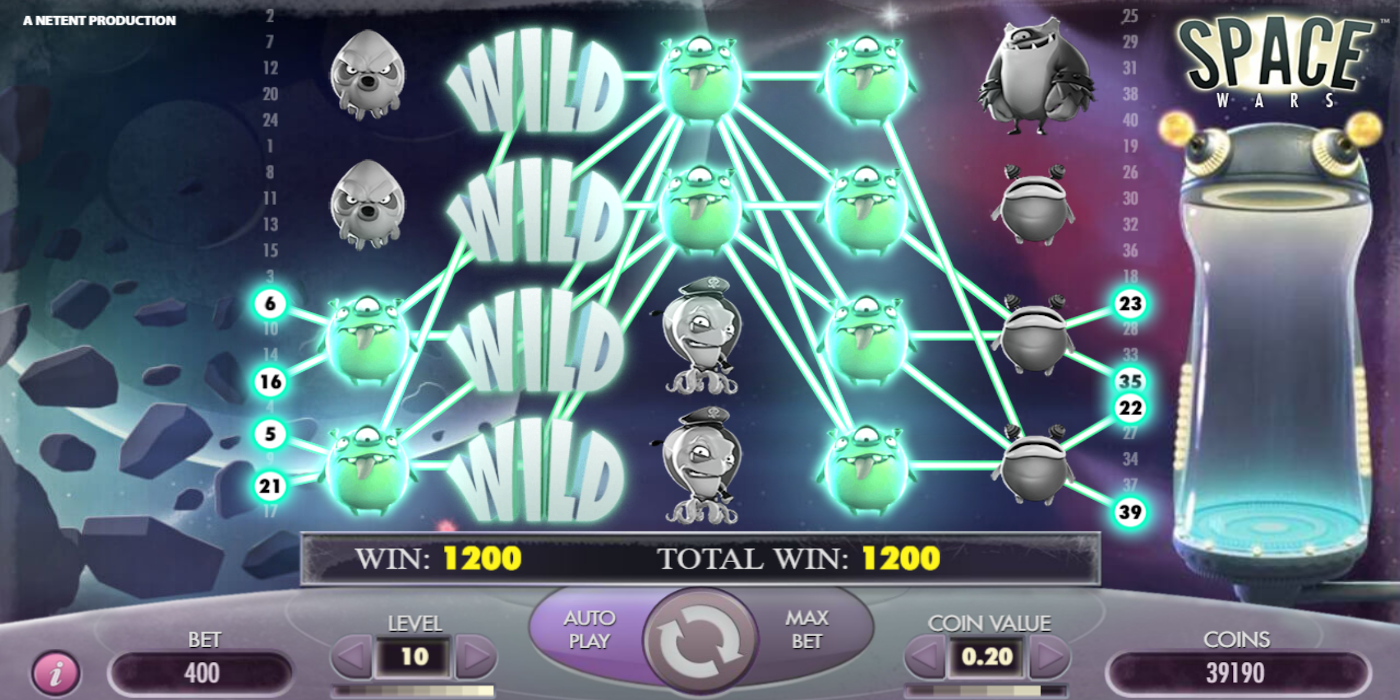 It’s not impossible to cover your screen with a stacked symbol because of the Clone Re-spin feature. Do this with the Wild or the crystals, and you’re surely going to win the war.

There are two main elements to this game that make it stand out from the crowd of other space-themed slots. The first being the amazing graphics that are far superior to what you’d expect from a video slot that’s also accessible through mobile. NetEnt has certainly mastered 3D animation gaming with this game.

Secondly, the innovative design and incorporation of the Clone Re-Spin feature is ingenious. It makes for an entirely different style of gaming. Paired with symbol stacks, this feature boosts winning potential sky-high. Turning this spin to win game into a superior fast-paced slot with very little else involved.

It’s also worthy of mentioning that the addition of the Skill Stop option is another welcome hidden feature. This add-on to the game mechanics separates it from the traditional slot styling and adds another level of gaming experience. You no longer have to rely on luck itself. Instead, you can hone in your quick reaction skills to find a win.

Space Wars has been ranked as a medium variance game with an RTP of 96.75%. With this being said, there’s a total of 1,000 times your stake up for grabs on every single spin, no matter if it’s a Re-Spin. 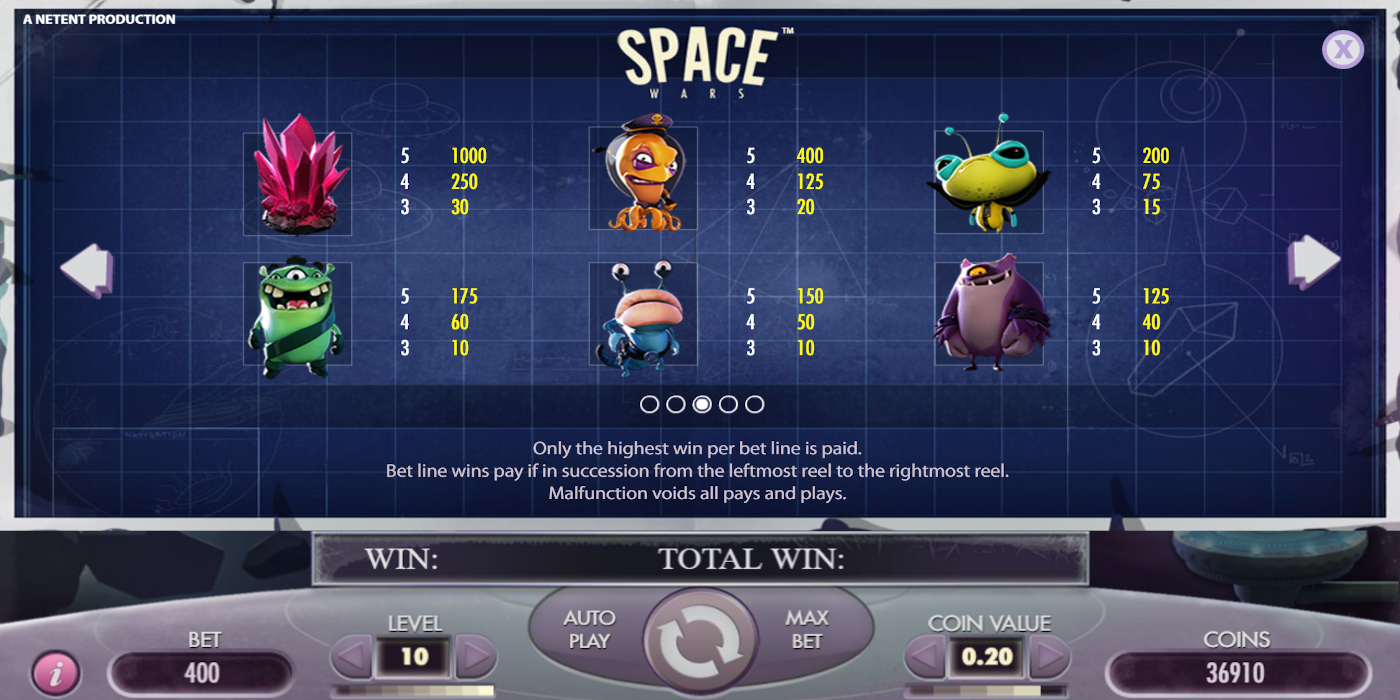 The coin value begins at 0.01 and can be stretched to 0.50 per line. Therefore your betting limits sit between €0.40 and €200 per spin. The payline is fixed, but you can still toggle your coin value up to 10 if you desire.

The most lucrative symbol, of course, is the red crystal we’re all fighting over. Landing 5 of the crystal symbols in a winning combination will award you with that elite level 1,000 times your bet.

If you place the highest possible level 10 bet with the crystal stakes in mind, you could be seeing a total of 10,000 coins coming your way. If you play on and the Clone Respin feature throws out your crystal combination ending up in a 40 payline cover, then you will receive the game’s Jackpot of 400,000 coins!

Space Wars on the surface is a simplistic and cute video slot. If you delve deeper, it becomes clear that the innovative game mechanics are captivating and allow for impressive payouts.

The potential money that’s up for grab in Space Wars should be enticing enough to boost this game onto everyone’s must-try list. 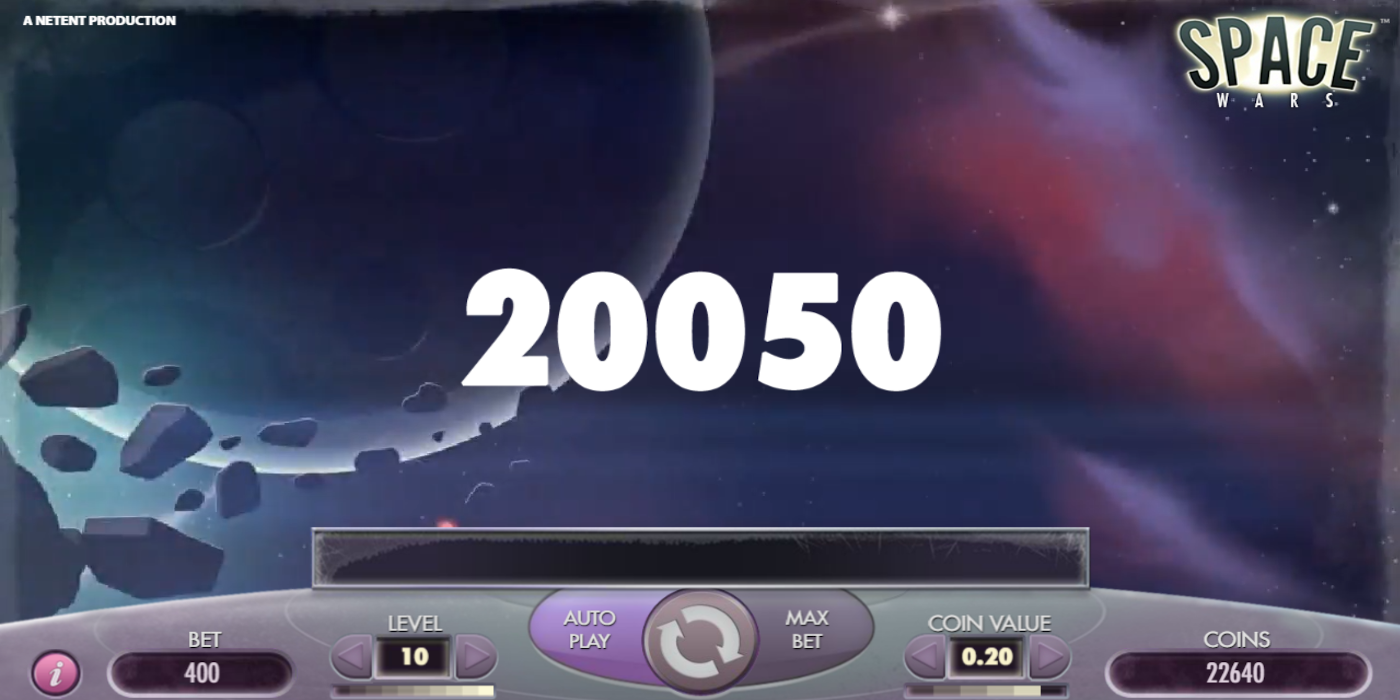 NetEnt has created the highest quality 3D animated gaming experience. It’ s easy to navigate and understand for all player levels to enjoy. The game also has interactive elements that allow you to take control of the action. As well as learn more about the paylines so you’ll always feel like the game is in your hands.

What are you waiting for? There’s a war in space, and it’s waiting for you to arrive. Those crystals are not going to mine themselves for bags full of coins.

This slot game played across 5 transparent reels, it has a huge amount of paylines with a total of 40.

❓ What is the Space Wars slot RTP?

Space Wars has been ranked as a medium variance game with an RTP of 96.75%.

❓ What is the bet limits of the Space Wars slot game?

❓ What is the maximum win in Space Wars video slot?

With this being said, there’s a total of 1,000 times your stake up for grabs on every single spin, no matter if it’s a Re-Spin.

❓ What are the special features of the Space Wars slot game?

Find out more about this slot game in this Space Wars slot review!