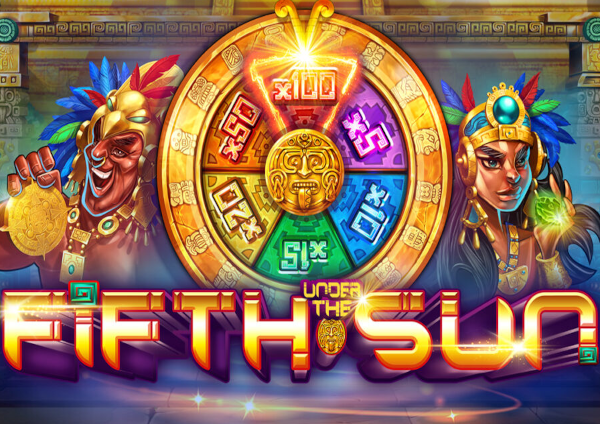 Under The Fifth Sun is an online slot game that allows you to experience the mysteries of the Aztec empire and claim its treasures. Felix Gaming released this slot in 2020, and since then, it has become a major success, thanks to its excellent features and many paylines.

Click on the link Under The Fifth Sun slot free DEMO on SmartCasinoGuide.

🛕 Does the Under The Fifth Sun casino slot game have Bonus feature?

✅ Yes! Try it out in Under The Fifth Sun free DEMO slot.

🛕 What is the Under The Fifth Sun slot RTP?

🛕 What is the Under The Fifth Sun volatility level?

The volatility of this slot game is high.

🛕 How many paylines does this slot have?

Under The Fifth Sun Game Mechanics

Under The Fifth Sun has a 5×3 reel layout with a background picture of an ancient temple. The slot is properly accompanied by cheerful music that calls you to the adventure. However, if you are not into that, you can easily turn it off by pressing the small speaker icon on the bottom right side of the screen.

To start the game, press the purple button at the middle-bottom side of the screen. If that becomes a hassle, you can press the “Auto-Spin” button on the left side of the screen, allowing you to spin the reels automatically. Be aware that you cannot adjust the number of spins on the auto mode, so it will spin until your credits drop to zero or until you stop it manually.

To adjust your bet, you press the “+” and “-” buttons at the left of the autoplay button. However, if you don’t want to bother with this, you can always press the “Max Bet” button at the right of the spin button. This will increase your bet to the maximum amount available. Remember that doing this will reduce your credits faster, but will allow you to win more if you land a combination.

Under the Fifth Sun has a total of 25 paylines available. You win from any combination from the leftmost side of the reels. If multiple wins happen on the same payline, you will be paid the largest win only, but if they occur in different paylines, you receive the sum of every combination.

If you want to consult what combinations are available, you can do so by pressing the “Pay Table” button at the left corner of the screen. Keep in mind that Under The Fifth Sun is only available in English.

Under The Fifth Sun Special Symbols

Under the Fifth Sun has a total of nine symbols available. First, we have the poker symbols (10, J, Q, K, A), which are the low-paying symbols. Next, we have the orange Quetzalcoatl, the green Puma, the mid-paying symbols, and the two Aztec warriors, the high-paying symbols. If you wish to determine how much you can win for each combination, you can do so by pressing the “Pay Table” button.

The wild symbol of Under the Fifth Sun is represented by a golden Aztec temple. The wild is a substitute for all the other symbols except the bonus symbol. If you land a combination of three or more wilds, you will trigger the Sneak Head Feature that can give you up to 10 free spins and a multiplier of X25, be aware that this feature is not available on the demo mode.

The bonus symbol of Under the Fifth Sun is represented by a roulette with multipliers of different colors. This symbol can only appear on the first, third, and fifth reels. If you land three or more bonus symbols, you will gain multipliers of X5, X10, X15, X20, X50, or X100.

You can tell that Felix Gaming studied the Aztec culture to make this game. The symbols are carefully designed to look like stone symbols, each symbol and button of Under the Fifth Sun has golden borders, which reference the treasures and gold that the Aztecs were famous for possessing. There are also the Puma and Quetzalcoatl symbols, which are a nice detail, as both were revered in that culture.

The catchy music, overall design, and fast animations of Under the Fifth Sun makes an overall appealing presentation that makes the game stand out from other slots based on ancient South American cultures.

We were impressed by how well this game runs; Felix Gaming did an awesome job optimizing Under the Fifth Sun, as the animations run very fast on both PCs and mobile devices. Very few slots work this well, and even fewer with bonuses as generous as the ones you find in this slot.

Under the Fifth Sun’s Sneak Head feature is pretty cool. While it may initially seem like a standard free spin round, the Sneak Head round offers multipliers that can go up to X25. If you combine these multipliers with those of the bonus symbols, you will get huge profits very quickly, so we recommend not to underestimate this feature.

Under the Fifth Sun has a good RTP of 95.52% and high volatility. This means that the chances of recovering the money of your bets are pretty good, and that the prizes obtained from the combinations will be generally good.

Under The Fifth Sun slot Conclusion

Felix Gaming has done an excellent job with Under the Fifth Sun. This slot comes with fantastic bonuses and a great RTP, all perfectly accompanied by a fantastic soundtrack and design that creates the perfect atmosphere of the Mexican jungles where the Aztec empire lived.

Our only complaint would be that you cannot adjust the amounts of the auto-spins, but this is something that doesn’t affect the overall experience of the game. We conclude this review by recommending you to play not only Under the Fifth Sun but also all Felix Gaming’s other slots.