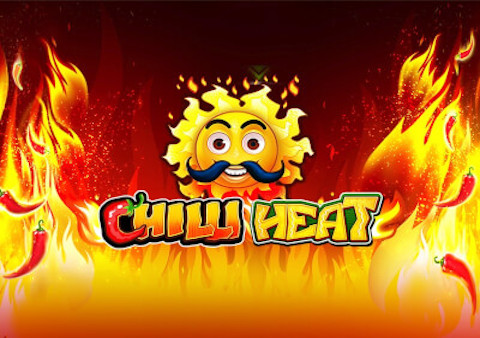 Chilli Heat is an online casino game developed by a relatively new game provider, Pragmatic Play. Launched in 2007, the company has a bigger portfolio and diversity than any other developer in the industry. Chilli Heat is one of Pragmatic Play’s designs and is a spice-themed slot with Mexican traits, built to have an attractive look that appeals to the modern player.

What do people ask about the Chilli Heat slot machine?
❓ How many paylines have Chilli Heat online video slot?

The slot game is based on 5 reels and 25 paylines.

❓ What is the Chilli Heat RTP?

The RTP of this slot game is 96.5%. Try Chilli Heat slot DEMO at the top of this review page.

❓ What is the bet limits of Chilli Heat game?

❓ What is the maximum win on Chilli Heat casino game?

The maximum exposure a user is allowed to have is €2,400,000, which is great considering the amount you can make from this slot.

❓ Is the Chilli Heat slot game has Jackpots feature?

✅ Yes! Find out more about this feature and Chilli Heat Free Spins in our Chilli Heat slot review.

While it is mainly an online slot for desktop, there is a mobile casino version of the slot hosted by Amigo Slots, giving users the freedom to play from any device of their choice and convenience at any time.

The slot has 5 reels, 25 paylines, and 3 rows. There are 5 buttons: Rebuy for buying more credits for your account, Game Rules for the complete rules of the game, Game Logs which lets you view the logs of all your previous games, Exit Game that takes the player out of the game and into the lobby, and lastly Quick Deposit button which lets users deposit money into their account. The game is available in 21 languages, including English, French, Russian, and Korean. 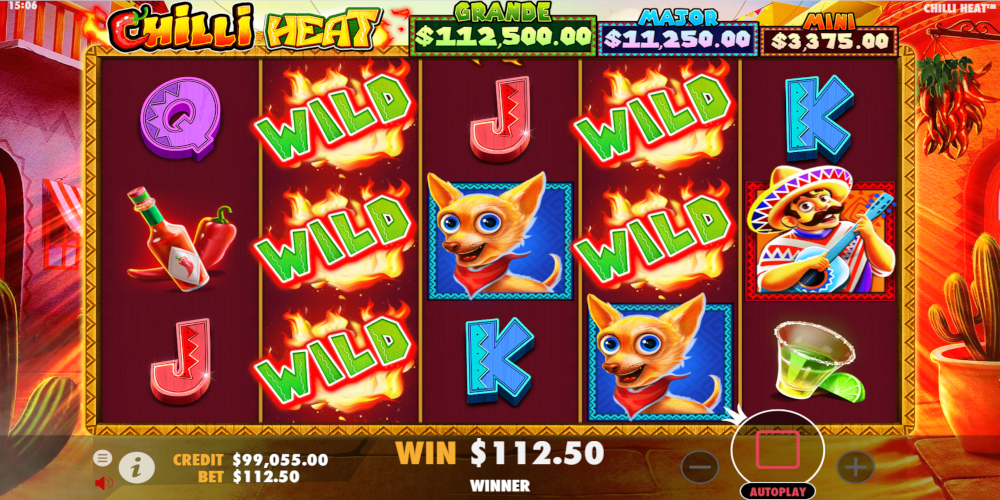 Even if a default bet is set when a player visits the game, he can change it by clicking the + or – button depending on whether he wants to reduce or increase it. The “Spin” button in the lower right corner is used to start the game. Users can also opt for the “Autoplay” button just under the “Spin” button to play hands-free. And, of course, they can stop autoplay anytime by clicking the same button, which turns red when autoplay is on.

Winning symbols are displayed with animation, and the win is shown in the middle of the bottom interface, while the balance and bets are displayed in the bottom left corner. The minimum bet is €0.25 and the maximum is €125.

The game features a male Mexican character in a poncho and wearing a sombrero playing Mariachi for starters. This symbol is the most lucrative. Besides the man, the slot features a Chihuahua, Hot Pepper and Sauce, and Tequila. Also, the usual card symbols, including Ace, King, Queen, and Jack.

Furthermore, the game’s logo is used as a symbol with special abilities on the reels. The Chilli Heat logo acts as a Wild symbol, which works similarly to other online slot game wilds. It replaces every other symbol except the Scatter and Money symbols. It is also lucrative to the player, for it can trigger bonus rounds. This wild is something every player needs to be on the lookout for given its merits.

The Money Bag symbol can appear on any of the reels. It carries a random value that determines the pay for the stake. When the player lands six or more Money Bag symbols, they trigger a money respin feature. All the values a player lands during the respin feature are added up together for the game to pay the total amount. The player is awarded a MEGA JACKPOT when there are 15 of these characters.

The Scatter character is the Mexican Sun with a face sporting a mustache. The scatter pays 1x the stake of the player when he hits three symbols in one spin. It is designed to land on a limited number of reels, namely the second, third, and fourth. It will initiate the free spin rounds when three lands on the paytables. The total number of free spin plays is eight. The Wild, Bonus, Chihuahua, Hot Pepper and Sauce, Mexican Mariachi, Tequila, and Scatter symbols are present during the free spin feature.

An outstanding feature of Chilli Heat is that it is easy to navigate, even for someone playing the game for the first time. The colors and secondary effects on the game give an excellent interface that users find appealing, so they keep playing.

It also has a demo version that allows new players to experiment with and have a feel for it before signing up for the real thing. The jackpot feature introduces another bonus feature, which makes the game even more exciting. It has re-spins, Free Spins, and special standard game symbols, such as the wilds. It also gives players a 96.52% chance of winning, making it one of the most rewarding slot games out there as well. Try Chilli Heat DEMO at the top of this review. 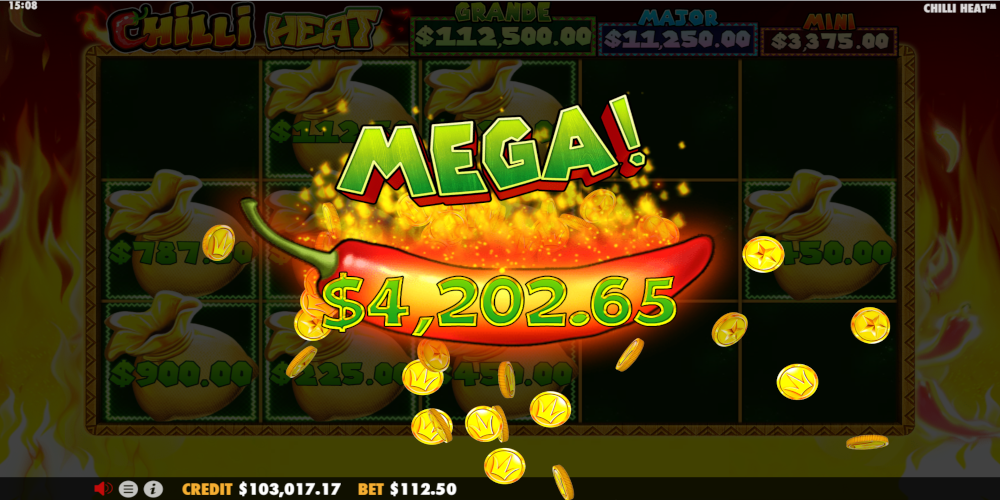 Chilli Heat has the typical basic betting control. The slot has a maximum of ten coins per line. The coin value can be adjusted from €0.01 to €0.50. The maximum stake a player can bet on a spin is €125, and the minimum is €0.25. The maximum exposure a user is allowed to have is €2,400,000, which is great considering the amount you can make from this slot.

The RTP of this Pragmatic Play slot is 96.50%. The most lucrative is the Mariachi, which pays €1000 for a perfect collection of five. The Chihuahua, Chilli pepper, and Tequila pay €750, €625, and €500, respectively. When six or more the Money Bag symbols land on the reels, the game pays for all the winning combinations. Chilli Heat presents an unusual proposition then that could double or triple the player’s wager.

Chilli Heat has its cards stacked well in its favor. That said, it’s obvious that gameplay is impeccable. This online slot has a lot of prospects to become probably the best title today and the near future. Pragmatic Play has done a really good job with this. While this is hardly the most original slot, it has loads of style and longevity with cryptocurrency gambling. 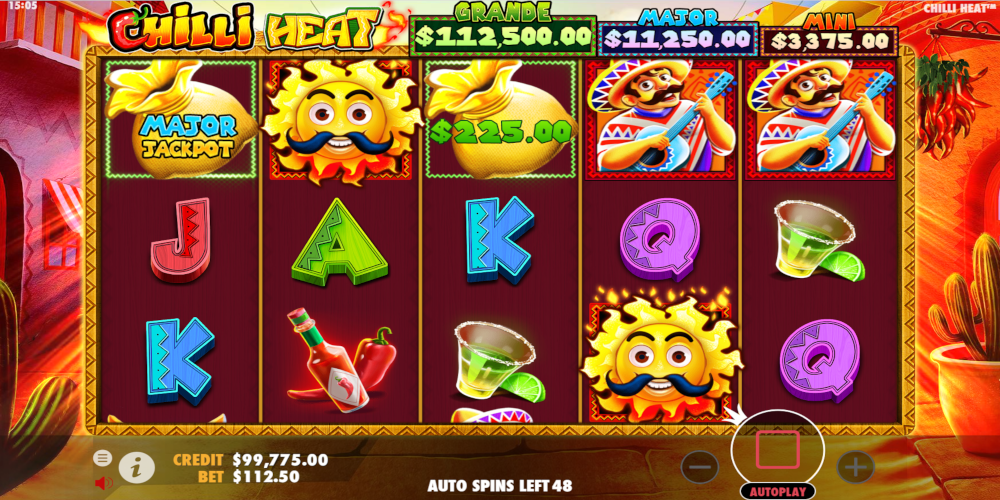