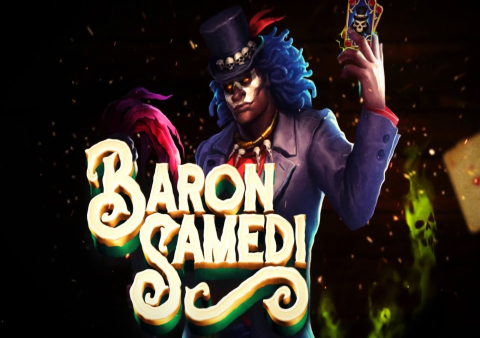 Yggdrasil Gaming (named after the Norse mythical tree if you were wondering) is a creator and innovator of popular slot games like Valley of the Gods, Tut’s Twister with its renowned high RTP and Joker Millions (where someone famously won €3.2 million in 2016 – the biggest progressive jackpot payout) 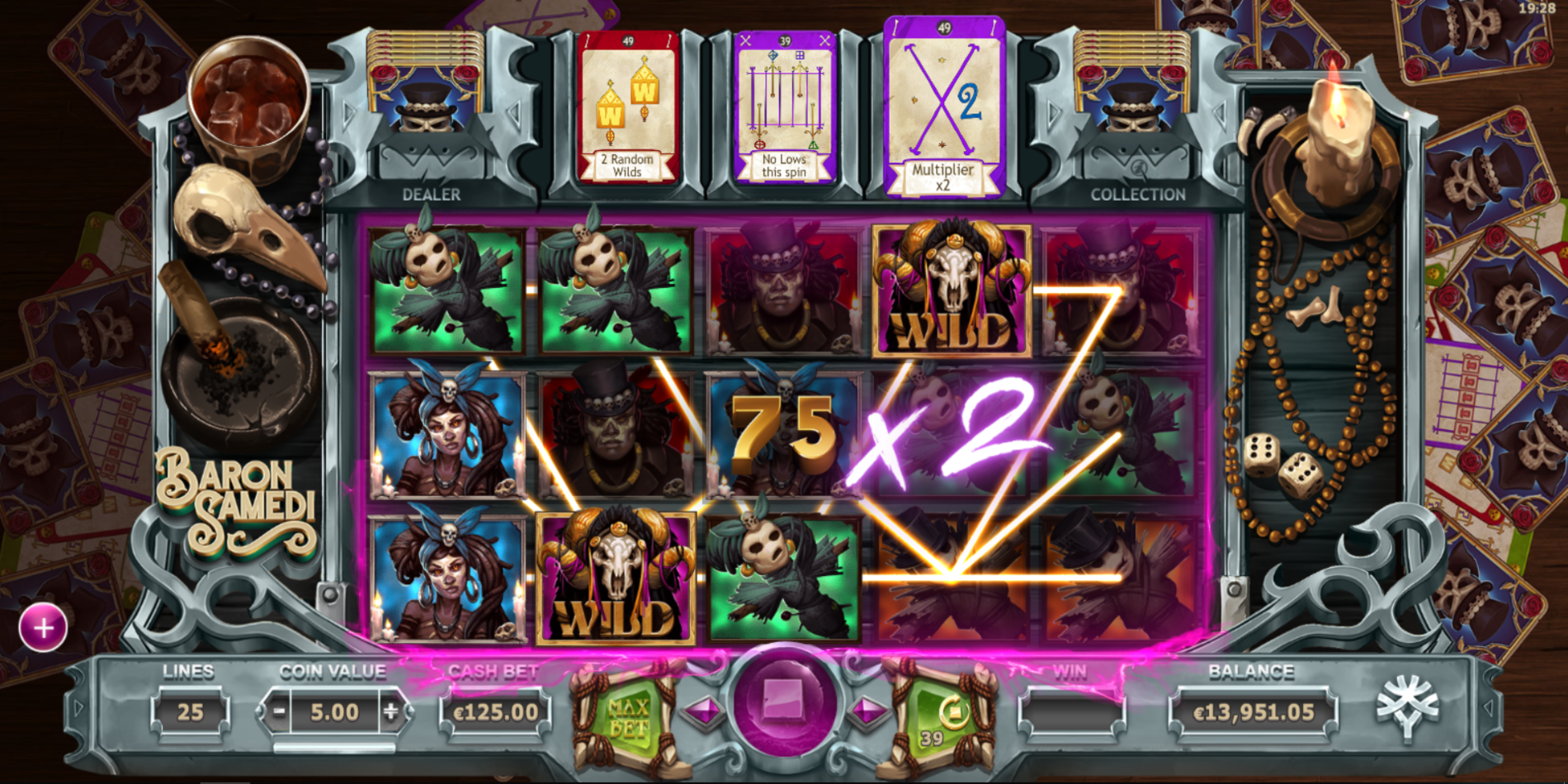 Yggdrasil was established by former CEO of NetEnt in 2013, so its games are usually engaging and high quality. They’ve been winning awards from International Gaming Awards and ERG (eGaming Review) annually since 2015, including Slot Provider of the Year.

Baron Samedi is one of the Loa of Haitian Voodoo; a Loa is a spirit of the Haitian Voodoo dead. He’s the guy you’ll see depicted in the top hat and black tailcoat, wearing dark glasses.

In the slot game, the Baron will port you to the world of voodoo, where he musters great riches for players. Read on to find out more about this highly-spirited slot game (see what we did there?)

Baron Samedi is available on various platforms and plays well on mobile (Apple or Android) or desktop due to the HTML5 format. Game resolution is 16:9 and supported browsers Google, Firefox, Internet Explorer, Safari. It’s a traditional video slot game with 5 reels, 3 rows, and 25 fixed paylines.

The background graphics are striking and portray familiar voodoo paraphernalia like skulls, dice, candles, and potions. The toolbar shows the number of lines, coin value, cash bet, win, and balance. There is an autoplay function, and players can adjust the coin value.

The features of this game are portrayed as various tarot cards. There are 36 collectible features depicted by a set of tarot cards held in the dealer holder at the top left of the screen. Players collect their dealt cars in the top right, which can be viewed by simply clicking on them.

Cards correspond to modifiers or multipliers. Depending on the card strength and set, there’s potential for big wins and lots of action. 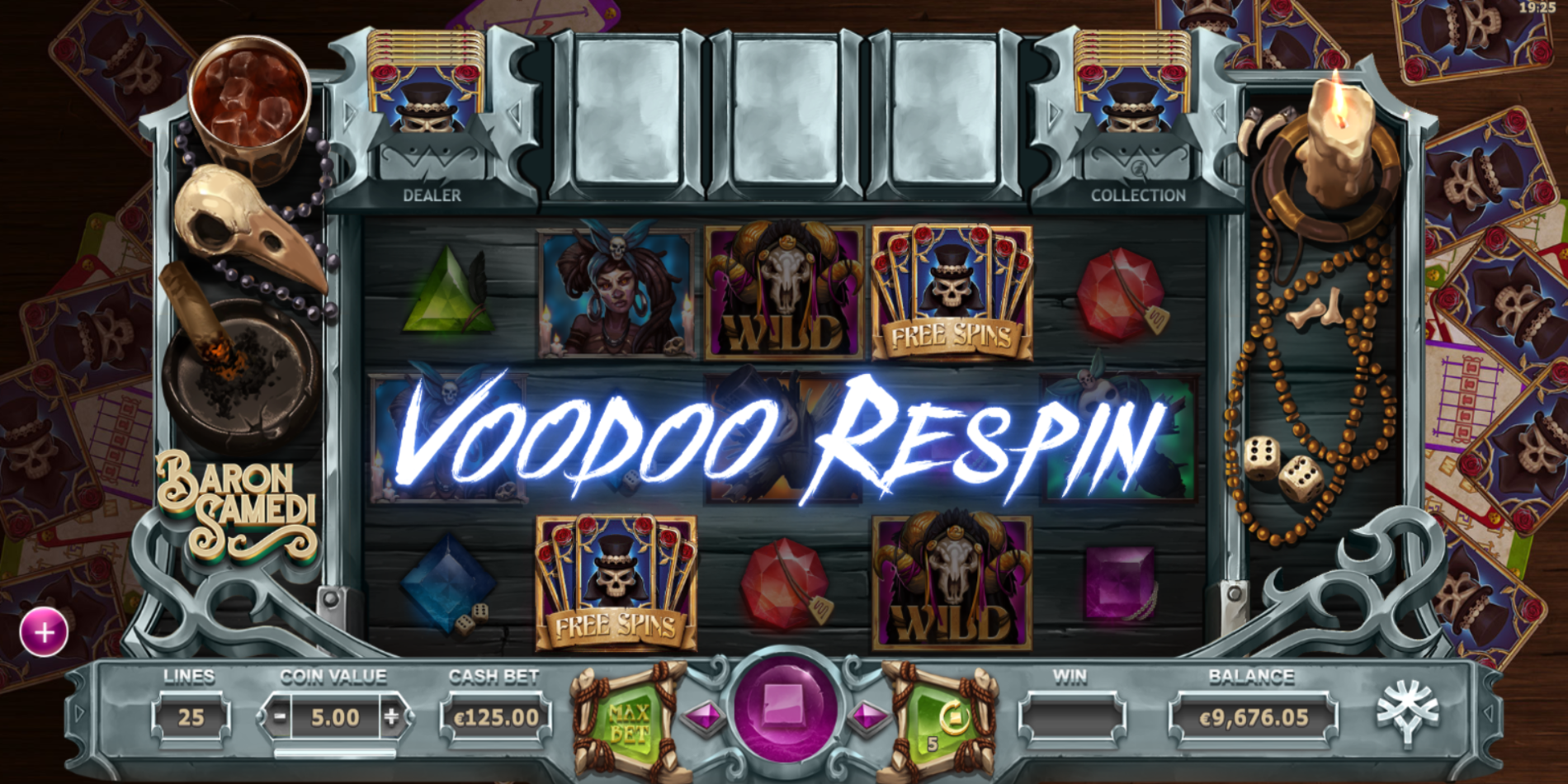 Voodoo re-spins occur when 2 or more Scatters are displayed on the reels. Three tarot cards appear and present their reward on the reels, and 1 Free Spin is won.

The Free Spins feature is triggered when 3, 4, or 5 Scatters land. 7 to 15 Free Spins are won, and 3 cards are dealt on each Free Spin.

There are several featured symbols within the slot game Baron Samedi. You can have 4 different colored gems (purple, green, blue, and red), which are the low-value symbols. The other symbols you’ll find in the game are as follows:

The goat skull is the Wild symbol which replaces all other symbols except the Scatters.

This is a well-designed game, as good as they come, and the graphics and soundtrack enrich the gameplay. Yggdrasil has done a good job creating a video slot based on the wacky world of voodoo. A dark voice announces the various features, and a spooky drum beat you can hear throughout gameplay.

Baron Samedi uses iSENSE 2.0+, which enhances and improves the user experience, including minimalistic UI on desktop and mobile. 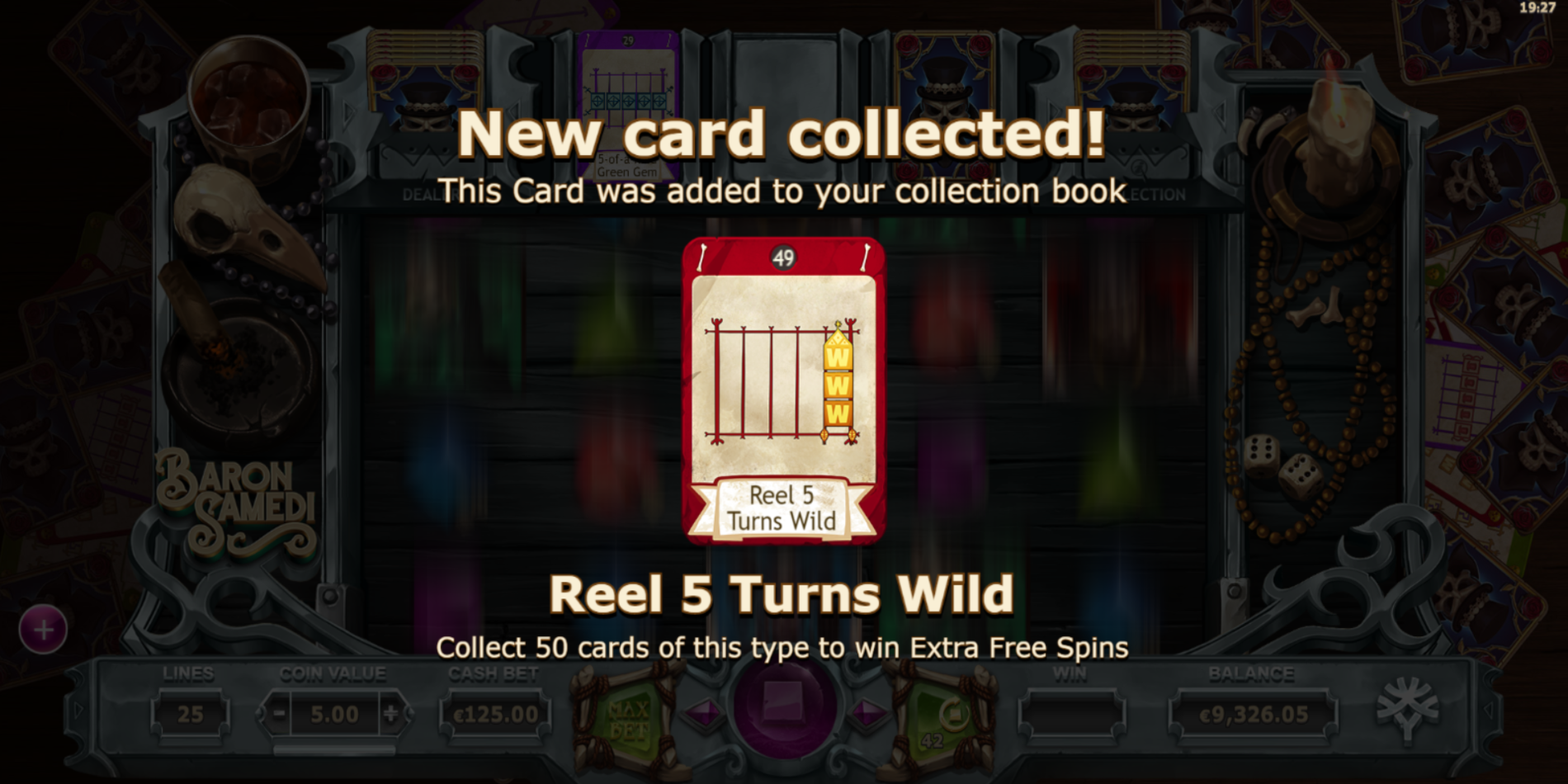 Players can also just click once to go to the deposit screen without leaving the game client. If it’s your kind of thing, the game is popular enough for players to join groups of like-minded people on Facebook, YouTube, Twitter, and Instagram.

Yggdrasil’s Head office is in Malta, and they have the license by the Malta Gaming Authority, and the Gambling Commission UK so you can rest assured about security.

There are the usual rules to follow in Baron Samedi, and these seem to reflect other popular slot games. Because of this, you will likely be able to play and win very quickly.

The game features an average RTP of 97% and a volatility of 50. Chances of success are average to good, so it’s a decent all-round game to play. You can bet anything from 0.10 coins to 125.00 coins per spin, and coins are adjustable depending on your chosen casino.

Obviously, winning percentages depend on how large your stake is in the first place and type and number of symbols which appear. Consequently, by betting more, you can boost your winnings.

One of the drawbacks of this game is that it doesn’t have a progressive jackpot. Although the features and Free Spins don’t make up for this, they do provide opportunities for larger payouts when triggered.

The maximum win is 1,200x the stake in conjunction with a 10x multiplier on each Free Spin. Don’t expect enormous gains but playing at least 65 spins to trigger the Free Spins feature to win big. 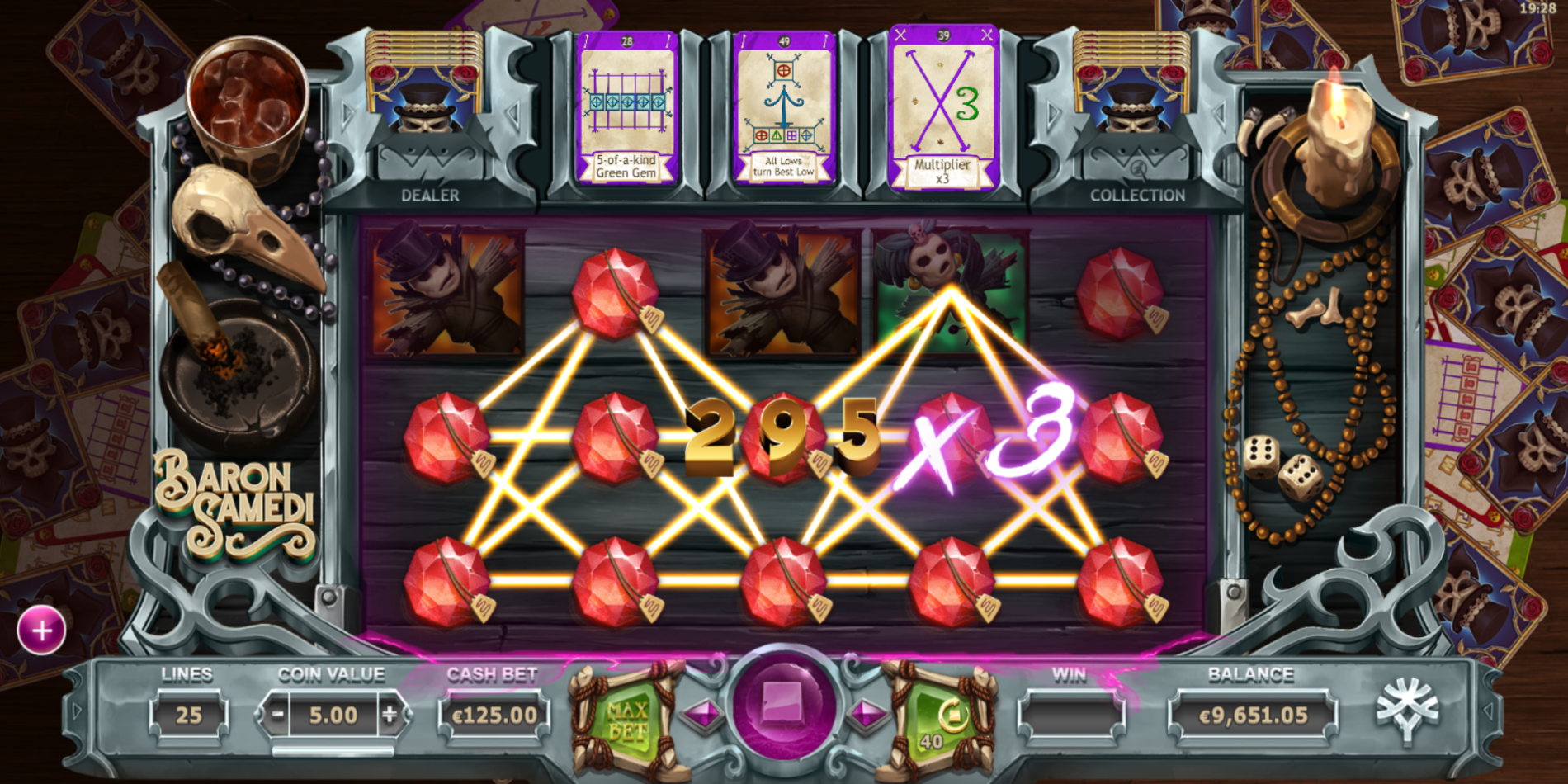 If you’re not too bothered about having a progressive jackpot, then this game is a decent one to play. The gameplay is interesting, and the bonuses are original.

This Yggdrasil slot takes a while to get used to the features, so if you don’t want to play with real money, check out the demo first. That said, one of the many benefits of playing this game is that it isn’t dull or monotonous.

Once you do master it, there’s medium variance and a whole lot of fun to be, so it’s definitely worth sticking it out. Try out your voodoo luck with Baron Samedi.