Fruit Mania Deluxe Slot game – How to play and Where to play?

Fruit Mania Deluxe slot machine is designed by Wazdan as the new and improved version of their original Fruit Mania slot. So, if you are a fan of that, you are sure to be of this one too. It comes with the same solid RTP of 96.59% and all the same great features including blocked reels and bonus rounds. Played over a 3×3 grid, once again with no set paylines but instead 9 reels and wins being made up of combinations of 4 or more of the same symbols anywhere among the reels. 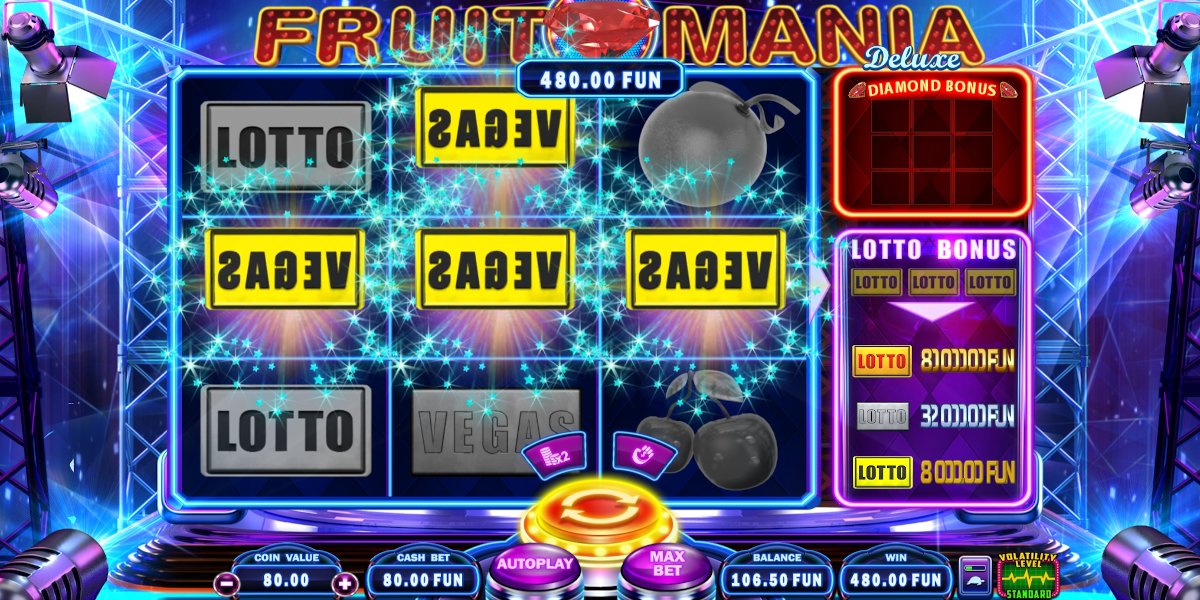 Wazdan did well in creating Fruit Mania Deluxe slot as it has been designed specifically for existing Fruit Mania fans, just as an upgraded and more engaging version. It has the same theme as an old classic machine with new and exciting innovating features but this version is much brighter and bolder in its setting, graphics and design.

Fruit Mania Deluxe also includes the Blocked Reels feature. After a spin, the game will automatically block the best set of symbols for the next spin for a chance to increase your wins. This is easily changeable and can pick to block any reel you may choose.

There is also the Deluxe Diamond Bonus, when the diamond bonus symbol appears on the reels, it switches on the corresponding field in the Diamond Bonus Matrix Table and will stay on while you continue playing. This happens for each Diamond Bonus Symbol that appears and once the table is full, the next draw of 3 or more Diamond symbols will reward 9 Bonus spins. Diamonds will stay locked throughout the bonus spins, including any new ones that land and how many you have at the end of the bonus round will pay according to the paytable. 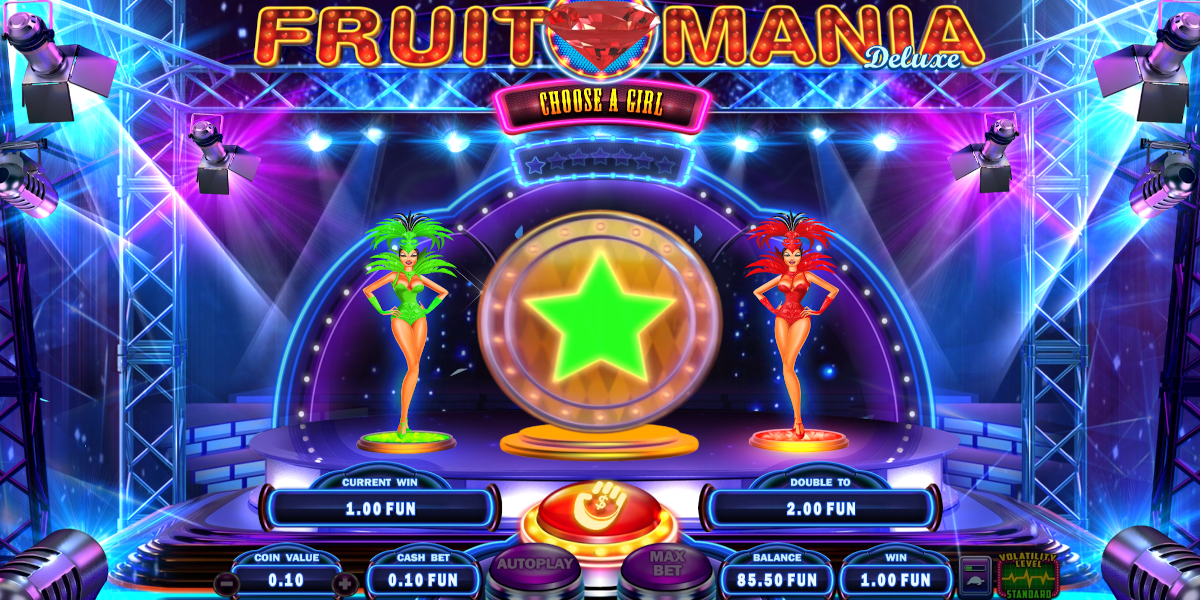 The Lotto Bonus starts when the Lotto Symbol appears on the 3 middle reels. You will then be directed to choose between 3 Lotto Tickets to reveal its contents for a prize.

The gamble feature is where Fruit Mania really comes to life. When making any win, if taking the given option to try and double that win, you will be directed to another room where you will find two beautiful Las Vegas showgirls, one in red and one in green. You simply have to choose between the two women for the 50/50 chance of doubling your stake. You can double bets up to 7 times if successful.

Also, if you are interested in Wazdan games, visit our website. There you will find detailed information about Wazdan’s unique features, achievements, history, slot design, special effects, and etc. And top of the page you will find an everyday updated list of Wazdan TOP10 slot games!

The symbols and wins in Fruit Mania Deluxe don’t really defer from the original Fruit Mania game however with the highest paying symbol still being the Diamond Symbol, also activating the bonus, with a pay-out of 500 for landing a full grid of all 9 diamonds. This is followed by the three varying Vegas plaques with pay-outs of 350, 250 and 200 for a full grid of all 9.

The Lotto ticket is also still the lowest value symbol paying just 15 for a full set, however it does activate the Lotto Bonus so there is still a chance for a great prize.

These payouts are based on the minimum bet of 0.10€ the maximum bet for Fruit Mania being 100€ of the currency in play. 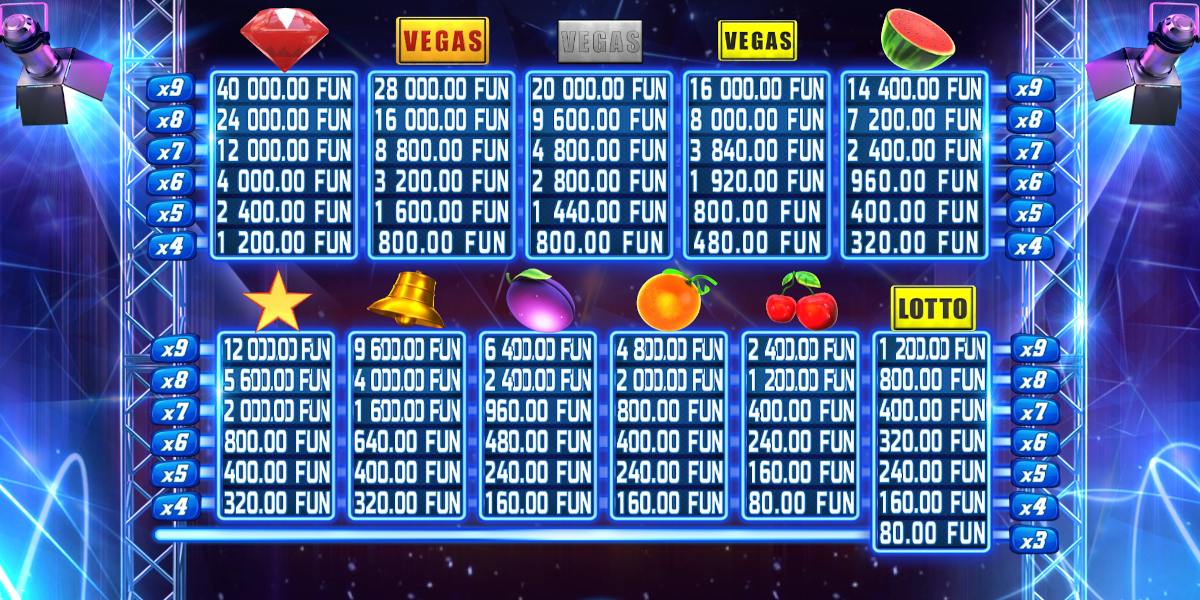 Honestly other than the design Fruit Mania Deluxe is pretty much exactly the same as the original Fruit Mania. It has all the same features and Bonus games, with the same maximum win of x1000, it would have been nice to see an extra bonus or a higher win possibility. However, this doesn’t take away from the fact that it is still a very entertaining, thoroughly enjoyable game to play.

Did you try this slot game DEMO version? Are you ready to play it in real money? Visit our Wazdan Casino page and find out TOP 10 online casinos to do it!

It doesn’t has set paylines but instead 9 reels and wins being made up of combinations of 4 or more of the same symbols anywhere among the reels.

❓ What is the Fruit Mania Deluxe slot RTP?

❓ What is the bet limits of Fruit Mania Deluxe slot game?

This game is based on the minimum bet of 0.10€ the maximum bet for Fruit Mania being 100€ of the currency in play.

❓ What are the special features of the Fruit Mania Deluxe?

More about all of them in this Fruit Mania Deluxe slot review.

✅ Yes! This happens for each Diamond Bonus Symbol that appears and once the table is full, the next draw of 3 or more Diamond symbols will reward 9 Bonus spins.