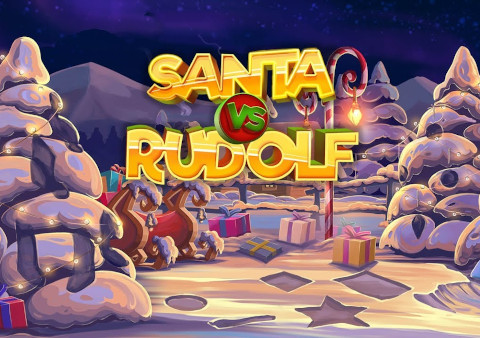 Santa and Rudolf are usually the closest of friends, but in this game, they’re at loggerheads. Rudolf has stolen Santa’s hat just before he was scheduled to fly out from the North Pole to deliver presents all over the world. Interested? Read more about this Santa vs Rudolf slot story by Net Entertainment.

Santa vs. Rudolf is a 5 reel video slot with 20 set pay lines that operate in both directions.

❓ What is the Santa vs Rudolf slot RTP?

❓ What is Santa vs Rudolf online casino game volatility level?

The volatility of this casino game is medium.

❓ What is the bet limits of Santa vs Rudolf video slot?

❓ What is the maximum win on Santa vs. Rudolf slot machine?

At the highest end of this range, the overall payout for the slot is 100,000 EUR.

❓ What are the special features of the Santa vs Rudolf NetEnt slot?

Find out everything about all of these special features in our Santa vs Rudolf slot review.

Santa needs help in finding his hat and getting the Christmas season back on track. It won’t be easy, though, because Rudolf is a cunning little reindeer, so he’s not going to give up.

This article explores the rivalry between these well-loved characters as they battle it out across the reels, colliding at times and triggering fantastic bonus features.

Other essential aspects such as game mechanics, special symbols, uniqueness of the game, and lastly, winnings are summed up perfectly for punters ready to get into the Christmas spirit.

NetEnt’s newly launched Santa vs Rudolf is a 5 reel video slot with 20 set pay lines that operate in both directions. Playable from 0.20 a spin, this 2019 slot promises a lot of fun and satisfying bonus games, such as Rudolf and Santa Clause Wilds, which travel around the reels to enable Free Spins.

Both Santa and Rudolf serve as Wild icons in this quirky video game. They’re also walking wilds that activate the respins function.

The wild Rudolf will only land on the first reel during the main game. It travels across the reels to the right after each turn, before becoming out of reach. The Santa wild can only arrive on the fifth reel and moves in the opposite direction.

There’s a chance for Santa and Rudolf to converge on the reels, which leads to a brawl between the two, activating a bonus feature. Not really Christmas unity, but at least punters get 10 Free Spins, to begin with.

4 extra spins are added each time Santa and Rudolf collide. These wild walking symbols tend to hit frequently during the free spins option. Because respins are awarded with each collision, users can typically expect more than just the initial ten free spins.

Let Rudolf and Santa come together on that reel to activate up to thirty gifts. Complete the Santa or Rudolf Meter to trigger the Santa Gifts or Rudolf Spins bonus features.

Symbols feature candy cane models A, K, Q, J, and 10 royals. Punters will also see wishlists, snow globes, reindeer collars, gift bags, and Santa’s sleigh. There isn’t an abundance of special symbols, but this shouldn’t pose a problem when players have a variety of ways to win.

The two Wild icons of this NetEnt slot game, namely Santa and his naughty reindeer, Rudolf waltz across the reels as they attempt to have it out with each other while players score.

The Santa vs. Rudolf slot game has a whacky Christmas design, focusing on the holiday season. With comic strip-style visuals and a festive track, users are carried away to the North Pole, as an unimpressed Santa and a cheeky Rudolf are standing on each side of the reels.

With the sheer abundance of slots to choose from, players might be wondering what makes this video slot game special.

Besides the eclectic take on Christmas, this slot stands out for its walking wilds and respins paired with win-both-directions. Playing each way helps to ensure that walking wilds are used to their utmost potential.

The walking Wilds will also cause Free Spins, and therefore no scatter could get in the way of winning lines.

There are even two appealing reward features for gamblers. If a punter ends up on the nice list, presents could be waiting. Players select Santa’s Gifts across three sets with an entertaining select & click type game that offers coins and multipliers.

The second aspect is Rudolf Spins, consisting of three reward spins with 5 wilds featuring spontaneously in each spin, making big wins a possibility.

To activate these extra bonus games, players need to fill up the red Santa or green Rudolf meters displayed at the top of the game. The walking wilds come in handy here.

Although this slot comes across as slightly cliched, NetEnt provides a user experience that’s fresh and exciting, with a different take on the red-nosed reindeer and his partner in crime, Santa.

Santa vs Rudolf bets can be on a relatively small scale, enabling players to choose the amount they’re happy with, around 0.20 and 400 EUR. At the highest end of this range, the overall payout for the slot is 100,000 EUR. Although this seems pretty good, players should remember that winning such a significant win isn’t a common occurrence.

Interestingly, the lowest value icons are always the royal candy cane card that rewards anywhere between 3 x and 5 x your stake for a basic five of a kind. That’s still better than the low-value icons on several other positions. Mid-value indicators include the wishlist, the snow globe, the collar, and the gift bag.

This game offers medium volatility and strong RTP at 96.35%, making it perfect for punters looking to spend their time without spending too much money. Find out more about slots machine odds and RTP here.

Santa vs Rudolf is undoubtedly distinct from most of the Christmas slots out there. It’s a light-hearted game that doesn’t treat the holiday too seriously. Santa battling with his iconic reindeer is a delightful and original surprise, staying true to NetEnt’s reputation for reinventing the wheel.

Besides the exciting rivalry between Santa and Rudolf in the game mechanics, there are also the walking wilds’ respins paired with win-both-directions and two appealing reward features. On top of all that, there are high betting limits, with medium volatility that’ll have punters hooked for hours on end. However, for players looking to hit some mega wins, another slot might be more suitable.

With its original take on Santa and his red-nosed companion, this game is worth a try for users happy to spend their time gathering small wins. Even so, Rudolph Spins just might garner an impeccable payout. Check it out today for the chance to see Rudolph in action. Who knows? Users could walk away with a pretty penny after all.