Brag card game is known to be a very popular British gambling game, and it is believed to be similar to poker but the game is older, and the method of wagering is different. The Three Card Poker is a game that was described by Edmond Hoyle and is said to date from the sixteenth century. The game makes use of the bluffing concept, and this has paved the way for poker variants known and loved to this day. The three card brag game is almost identical to Teen Patti. There are other variations of the game, and they are four and five card variations. 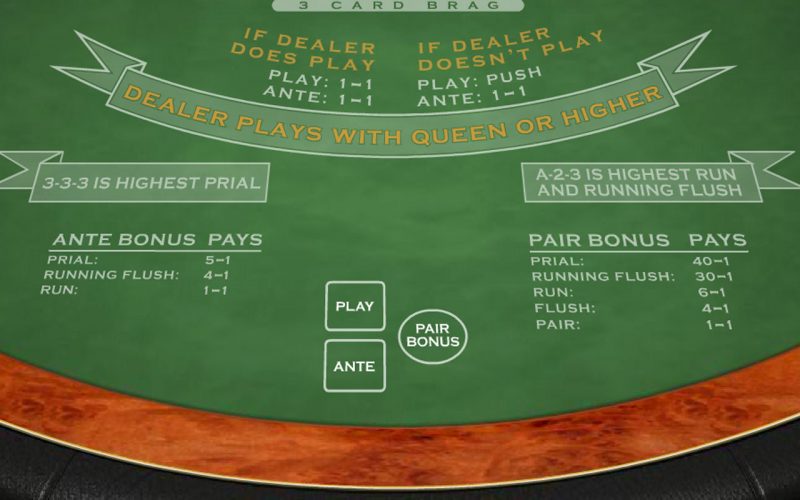 Three Card Brag is played with a standard deck of 52 cards except for the joker. The best way to play the game is with 4 to 8 players, but the game can be played with two players. The cards are shuffled at the beginning of the game or after a winning pair royal. The game’s round will last for about five minutes. The aim of this game is for you to get the best three-card hand. You also have the chance to bluff. Bluffing means that you can brag about your cards’ value and this is meant to mislead other players hoping that they will believe you have a stronger hand for them to fold from the game.

As a rule of the game, the ante needs to be established before your gameplay starts. This is along with the minimum and maximum bets for the initial bet and the limit on the amount you can increase your bet. So rules of 3 card brag is quite simple.

How to play 3 Card Brag game

When choosing to place the ante bet, click on the playfield on the table or the play circle on the end so the dealer’s cards can be displayed. When the play function is activated, your stake will be raised by putting an equal play bet, and this means that it will be doubled. When the dealer’s cards are revealed, the sum win is determined depending on the highest hand in 3 card brag. The winning hand is the highest ranked poker hand with the lowest rank as the high card and the next ranked hand as a pair. After these two, other ranks are flush, run, running flush, and the prial which is the three of a kind. From the game’s interface, you will get the paytable section which has all the ranks for the hands.

The dealer needs to qualify, and he will qualify if he has a queen or higher card in hand. When he does not qualify, the bet placed on Ante will be paid out to the winning player, and this is taken as a one to one win. As the winner, the play bet will be yours and will be returned as a push. When you beat the dealer, the Ante and play bets will also be paid as one to one win. When the dealer’s hand is higher, you will lose the ante and play stakes. If you have a Run, a Running Flush or a Prial, the winnings will get bigger. These are considered as ante bonus awards and will be won regardless of the dealer’s cards and as long as you are in the game and don’t fold.

When you click on the fold field on the table, all bets will be lost, and the cards dealt collected.

After all the cards have been dealt, the player on the left of the dealer starts to bet. The punter has the liberty to fold and no longer be part of the hand or place a wager with regard to the minimum and maximum agreed amounts. When all players in the hand fold except one, the remaining player will take all the money that’s in the pot and dealing the next hand starts. A player might have the liberty to be more than the previous player, but there must be an agreement on the limit to the amount increase on the bet. Betting will progress around the table as many times as possible. 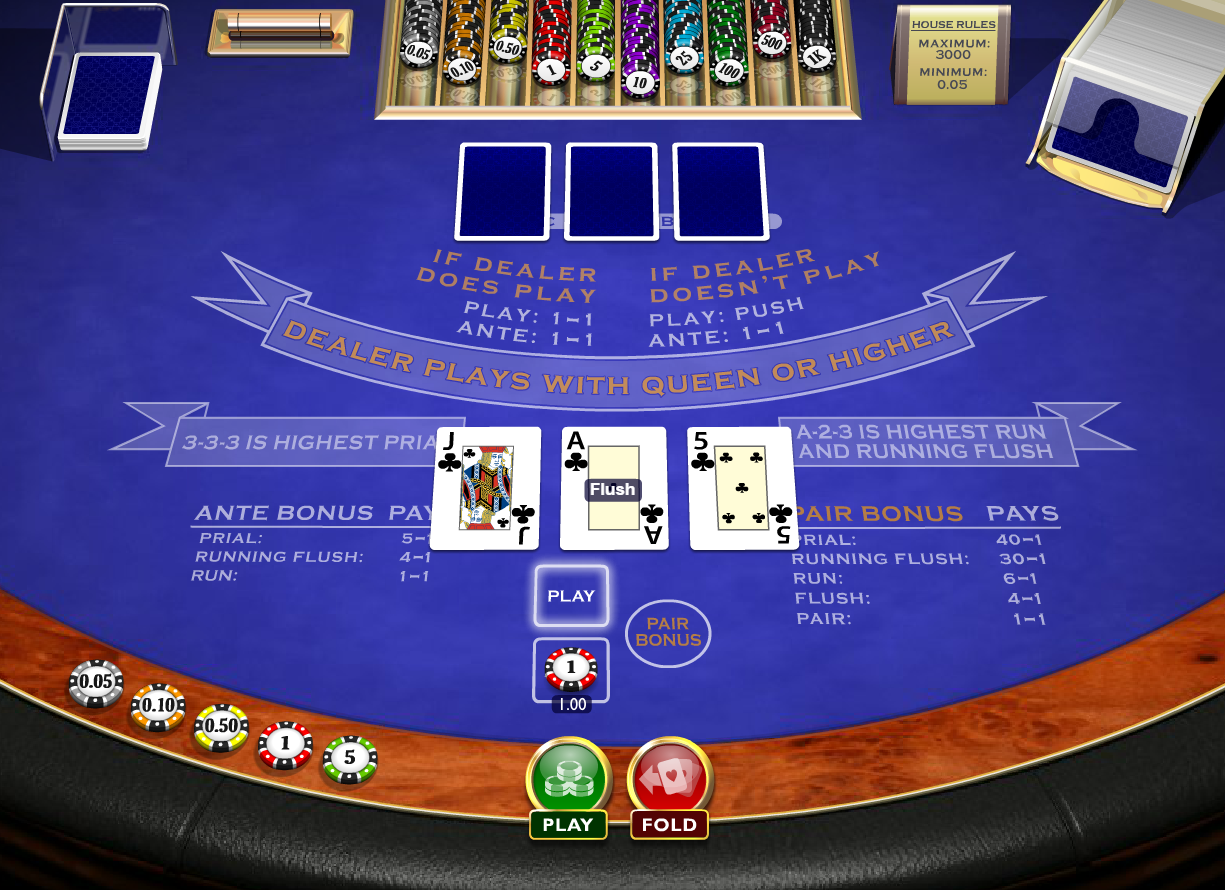 When two players have been left on the table, there is the provision of a third option where either player can see the other’s cards. Seeing the cards will cost twice as much as the bet placed by the previous player. After paying to see your opponent’s cards, he will expose their hand first, and if yours is better, you will expose yours as proof, and you will win the pot. When the hands’ values are equal, the player who paid to see their opponent’s hand will lose.

Brag is rarely played with table stakes like in poker where all your bankroll money is placed on the table where everyone can see. Brag players have their money in their pockets all the time until when they need to place a wager. Each player taking part in the game needs to place a minimum amount of bankroll on the table. When the agreed amount is exhausted, you have the liberty to introduce more money to the game as you wish.

There might come a time when you don’t have enough money to wager, but you want to be in the game. What you have to do is place all your money that’s left and your hand face down. This is termed as covering the pot. When there are two or more players, they will continue placing their bets, but they will have a new pot. After settling the new pot, the winner’s hand will be shown, and the hand that covered the pot will be compared with it. The old pot will be won by the higher hand or by the winner to the new pot if they tie. 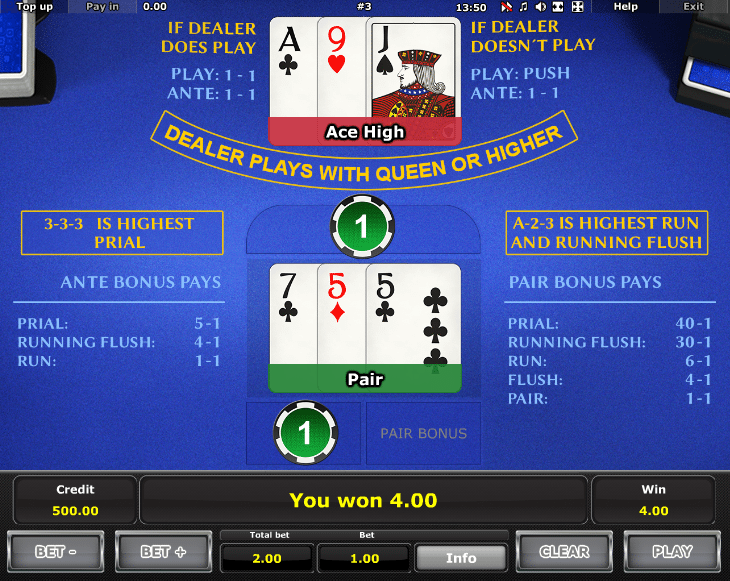 You can cover the pot when you are only two players on the table. When one of you runs out of the money, betting will end when one player puts all his money in the pot. The other player needs not put the money but he will expose the cards, and the hand with the highest value will win the pot.

The rule of covering the pot might seem harsh, but from experiences from players who have played the game, the player running out of money is allowed to borrow money from a player who has more money or one who has backed out of the game. This is a great move that will allow players to continue placing their bets. The player with the money has the option to lend to the one who has run out of money or show their cards, and in this case, he will only win if he has the better hand.

When you bet with money that you have borrowed, you will be getting yourself to a difficult situation where you are to fold a hand that’s good or borrow money you might not be able to repay. This kind of situation happens when blind betting is permitted, and this is because the blind bettor will continue betting indefinitely against an open player and the open player will not be able to see the blind one. When three or more players are betting, and none is ready to fold, they will feel that the pot is big and they might showdown, and in this situation, all cards will be exposed and the highest hand will be the winner.

Bling betting is when you do not look at the cards you have been dealt; the cards are left facedown. This is a technique that is used by experienced three-card brag. You will take part in all betting activities, but all your wagers will be worth double. This means that you will be putting in half the money you would if you needed to bet as you looked at your cards.

When making blind wagers, you have the option to look at your cards to decide whether you want to fold or bet. If you choose to look at the cards, you will no longer be a blind punter, and if you still want to be part of the game, you will start making bets like the non-blind punters.

The live 3 card brag version is a new concept but for those who play live three-card poker will learn that it is not that different even though it has an older history. The game has been in the United Kingdom since the 16th Century. This is another variation of poker, but instead of it being played with five cards it’s being played with three cards. With three-card brag, you play against other players, and one of them acts as the dealer, but the three card brag online live version has two hands. One hand is for the player while the other is for the dealer. The aim of this game is for the player to beat the dealer with a hand of high value. 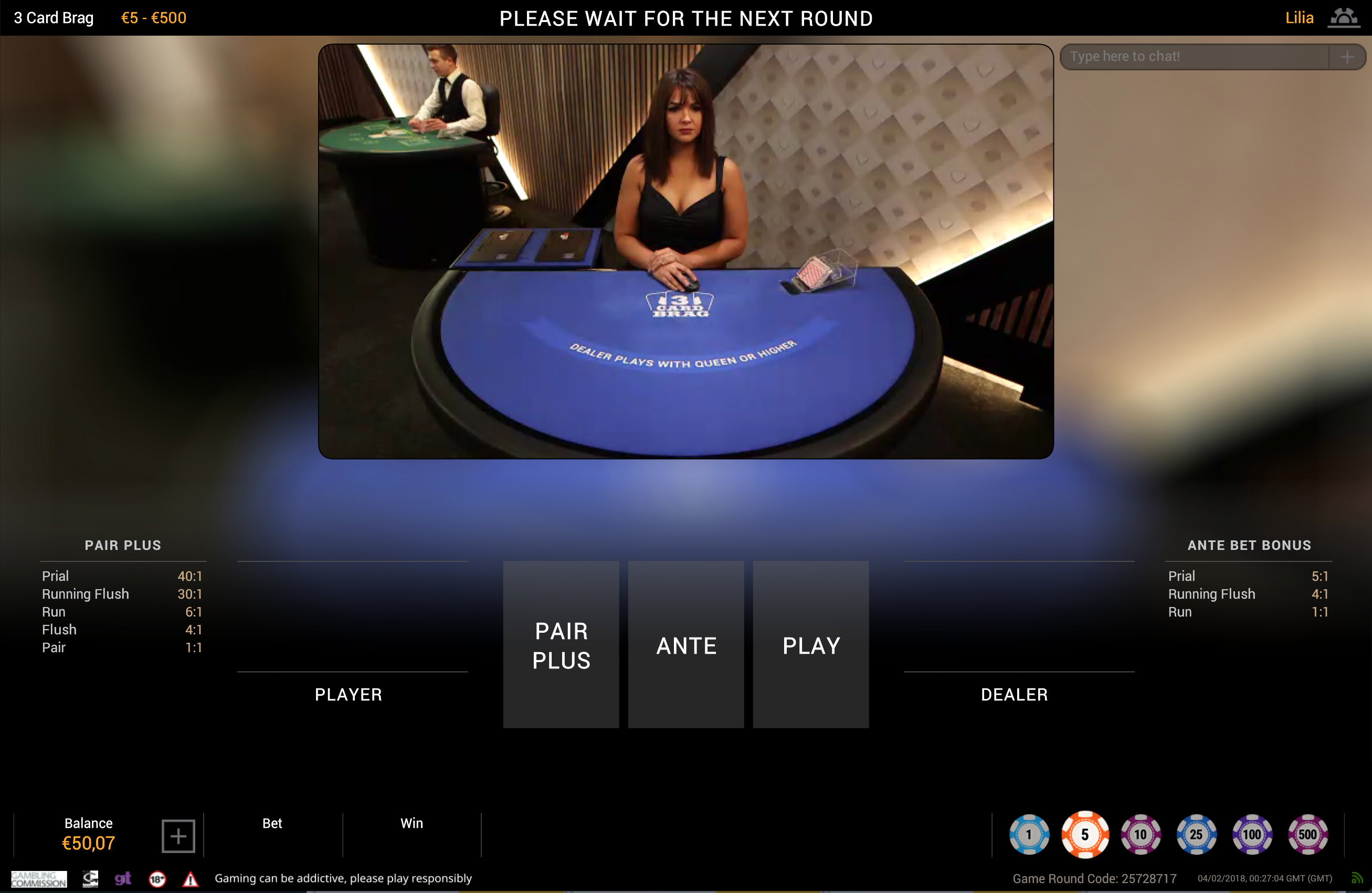