Pontoon is a name for two kinds of Blackjack card game, and they tend to be confusing to the players. We have Australian Pontoon which is a variant of Spanish 21. The Australian version is popular in New Zealand, Malaysia, India, and Australia. The other variant is popular in American and European casinos.

The game is called pontoon, and it gained popularity in England which makes the game seem like a British blackjack version. In British Pontoon, the natural 21 is not known as blackjack but is referred to the pontoon. An important hand in the game is the five card trick which doesn’t bust, and the hand pays 2:1. This makes the hand a great proposition any time you have four cards and haven’t busted. 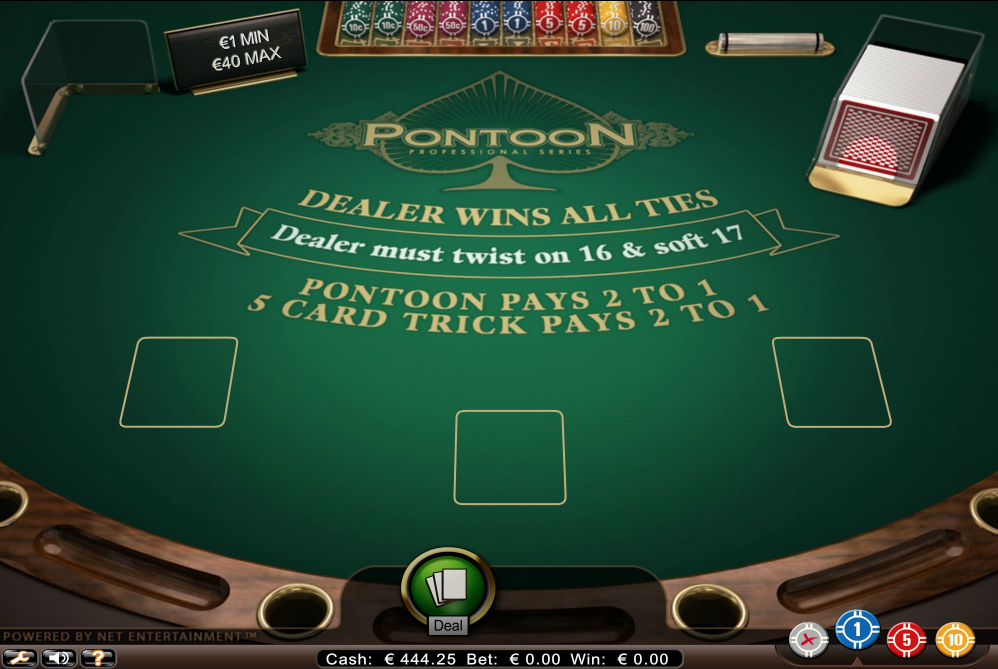 The game is popular thanks to its huge rewards any point in the hand. The player bags the standard win for a 21, but when this does not happen, there are chances of getting even bigger wins. The moment you learn how to play the three card and four card hands, it will be important for you to also learn about the basic strategy since the enticement of pontoon payout will make newbie players go for marginal hits.

When you are playing the British Pontoon, you will come across terms like twist which mean hit, stick which represents stand and buy which means you will double the bet. The rules are also different from what we are used to in the standard blackjack game. Rules in pontoon indicate that a player is allowed to buy when they have a hand of two to four cards, and they also allow the player to twist after they buy. When it comes to the deck size, the deck usually has eight 52-card decks. You will realize that land-based casinos have smaller decks. You will also notice that some online casinos will support 2-deck pontoon. The ranks in the hands are similar to the traditional blackjack game.

In pontoon, you can play with any number of players, but the number that works well will be five to eight 52-card deck. When the numbers of players are more, you will be allowed to play with two 52-card decks. Every player in the game aims to have a card valued at 21 or close to 21. The banker is chosen at random, and this is done by dealing the cards face-up to all players until one gets the highest valued card.

When the game commences, the punters bet at having a hand that’s better to that of the banker. The best hand, in this case, is the pontoon (21). After the pontoon, the best hand is the five-card-trick, and this is a hand made up of five cards with a total value of 21 or less. When you have a hand made up of three or four cards with a value of 21, you will beat all other hands apart from the five-card-trick or the pontoon. If you have a hand with a value exceeding 21 points, this is a bust and is considered worthless.

How to Play Pontoon

Similar to the standard blackjack game, it is possible for you to employ a strategy for maximum return on your wagers. A good strategy will also lower the house-edge which is great for you in the long run.

The basic rules in pontoon are almost similar to those in blackjack, but there are some differences in a few of them. One of the differences is that the dealer will not have a hole card. And this means that there is the possibility of winning with 21 anytime without the need to wait to see whether the dealer has a natural blackjack. Another rule that differs to those in blackjack is that as a player you will not get the chance to stand on 14 or less and you need to continue hitting until you have at least 15. The game is played with a Spanish deck, which has 48 cards where all tens have been removed. In this game of pontoon, you will lose if you push with the dealer and this means this is when you both finish with the same total.

When playing pontoon, cards are dealt face-up until one of the players gets a jack. This player will become the banker, and this will be the case until a player gets a pontoon. The winning player will become the banker in the next hand. The ace is counted as one or 11 points, the 10 and the court cards are valued as 10, and the rest of the cards bear their face value.

As mentioned earlier, the best hand is a two-card hand worth 21 points known as the pontoon, and it bears an ace and a royal card or 10. The second best hand is the five card trick which is made up of five cards with any total value equal or less than 21. The banker proceeds to give one card face down to each player on the table. The players will look at their cards, and they will place a bet with regard to the agreed minimum and maximum bet amounts. The banker will proceed to give them a second card. When you look at the second card and add up the value of your hand, you can choose to call a pontoon, twist, stick, split or buy a card. 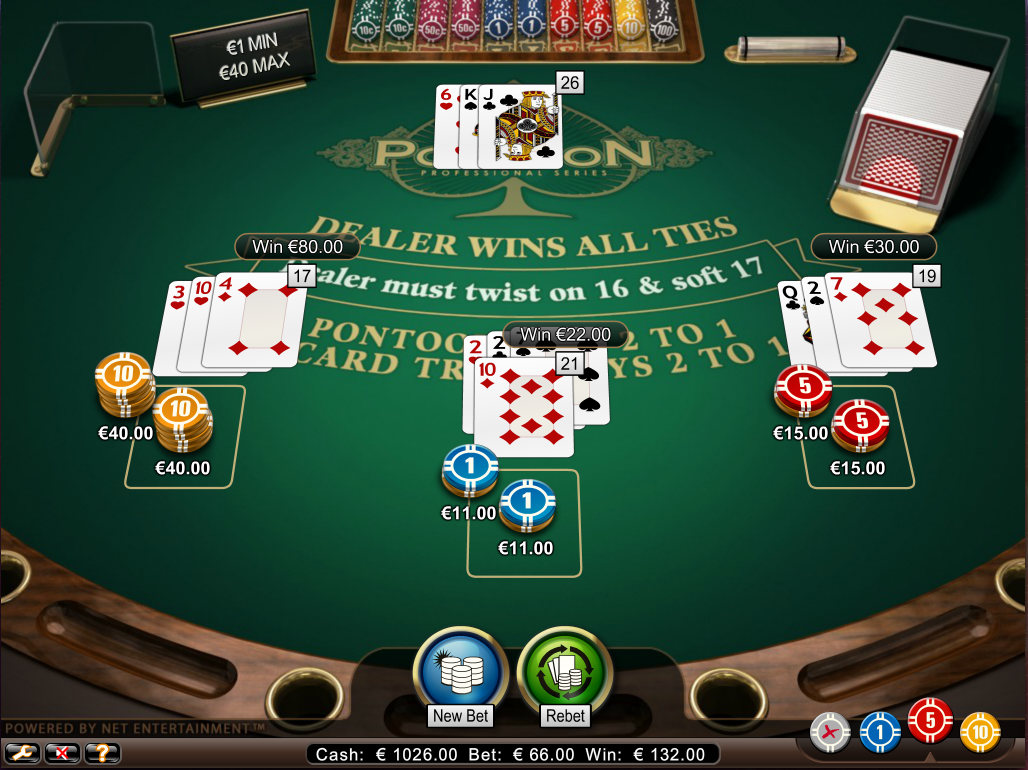 Your first move when playing pontoon should be making a bet that you will beat the dealer and win the hand. You will then get two cards, and your goal is to make sure that they are more than what the dealer has but should not be valued at more than 21 points. You will be announced as the winner if the banker’s hand goes over 21 points. You have the option to hit for you to get more cards and you can stand when you have at least 15 points if you wish to stop with the hand value you have at the moment. In this case, if the dealer beats you, you will lose but when he busts you will be the winner.

What you do as the player

You have the option to split if you have two cards of equal rank. You are supposed to put these cards face-up on the playing table and place another bet that’s of the same value to the first bet. When this is done, the banker will deal another card face-down for each hand. From this time forth, you are supposed to play these hands separately with individual bets. You can split the hands again if you get new cards that are equivalent to the initial two. You are not supposed to split two cards with the values of ten point unless they are equal. This means that you cannot split a jack and a queen, but you can split two jacks.

When you have a total hand value of less than 21, you have the choice to buy another card. For you to get another card, you need to add an amount that is at minimum equal to and not more than two times the first bet you made. For instance, if your initial stake was 5, you can make a buy bet that’s between 5 and 10. After making your bet, the banker will deal an additional card facing down, and if your hand still has a value less than 21, you can make another buy bet for a fourth card.

You can choose to stick when the sum value of your cards is at a minimum of 15. This means that you want to remain with the cards you had and your bet will remain the same. 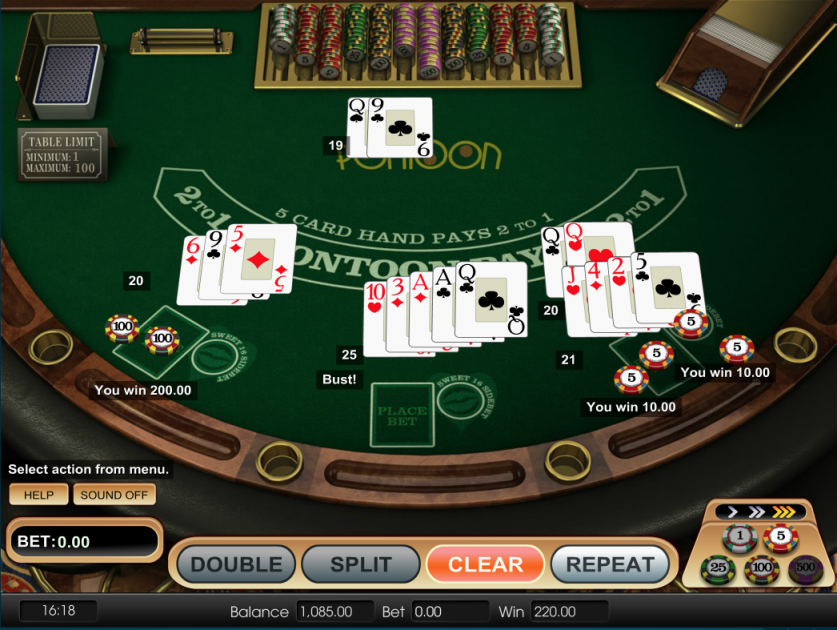 What the banker does

After all punters get their chance, the banker turns his two cards face up. Other player’s cards are not face up at this time not unless they have twisted, declared a pontoon or split. If the banker is not satisfied with his cards, he can add one face up, or he can stay. When this happens, the possible outcomes can be that the dealer will go bust or he will stay on 21 or less with four or fewer cards.

If the dealer busts, he is supposed to pay-out a sum that is equal to his bet to all players who are within the 21 value and pay double to any card that has a pontoon or five card trick. When he is within the 21 value, he is supposed to pay a sum equal to his bet to players who will have a higher value and collect from those with equal or less. As for the pontoon and the five-card-tricks, they are paid two-fold. When the dealer has a five card trick, he is only supposed to play pontoons only; a punter with a pontoon will receive double their stake from the banker.

When playing any online casino game, it is important for you to have a strategy and to follow it to the letter. With a strategy, you are making sure that you will be lowering the house edge which is about 0.38% in online casinos. For you to accomplish this, you can one of the many strategy cards that are available online and in brick and mortar casinos.

When you visit some of the online casinos, you will realize that some of them will have pontoon strategy advise added to their table interface which will make things easy for you. These charts are easy to follow and if you stick to them, you will increase your chances of bagging a win. As you apply the pontoon strategy, you need to employ good bankroll management to make things easy for you.

As you go about this, you need to understand the variant of the game you’re playing since it means different things in different countries. Before you can start playing the game for real money, it will be important for you to practice the game online for free. This will make it easy for you to become familiar with the game and learn from the mistakes you make.

You need not have in-depth knowledge of these odds for you to ace at the game. For you to better understand the odds of this game, we will describe them with the house edge. When playing in an online casino, you will have a house edge of 0.38%. With such a house edge, it means that in the long run, you will be able to recoup 99.62% of your stake. Even though the odds seem to be in your favour, you will need luck for you to make the best of the game. The odds in pontoon will change with regard to your habits of playing and how the house rules in the game change.

· Refrain from online casinos that will have weird rules meant to increase the house edge. This will lead to more losses.

· Have an optimal strategy that you follow to the letter. Playing the game blindly will increase the house edge.

· Make use of bonuses and promotions being offered at the casino as they might have a positive effect on your gaming.