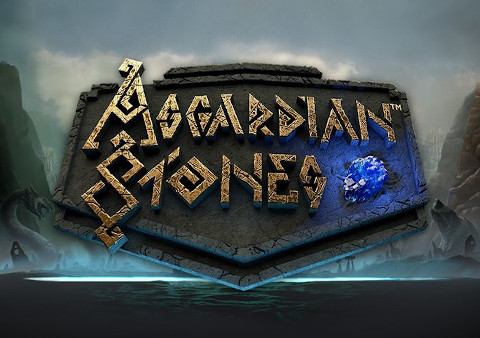 Brush up on your Norse mythology as you approach the gates of Asgard. Amid a mystical slot background, the ancient home of the gods sits the Asgardian stones floating above an electric blue pool of water. Here you’ll be faced with intricately detailed stone carved Norse gods.

Asgardian stones are set across 5 reels and 20 paylines.

❓ What is the Asgardian Stones slot RTP?

Asgardian Stones has a healthy RTP of 96.31% and is ranked as a medium variance game.

❓ What is the bet limits of Asgardian Stones slot machine?

❓ What is the maximum win on Asgardian Stones video slot?

Through the base game and the Free-Spins feature, you can win a colossal 2,000 times your stake.

❓ What are the special features of the Asgardian Stones slot?

The stones are hiding many secrets, including cash prizes, Colossal Crushes, Free Spins, and a Bonus Wheel. They all tumble down around each other in an avalanche style. Winning combinations are blasted from your screen by the power of the gods.

If you think you have what it takes to unlock the mysteries of the Asgardian Stones from the NetEnt slot games list, then step up, and may the gods be in your favor. 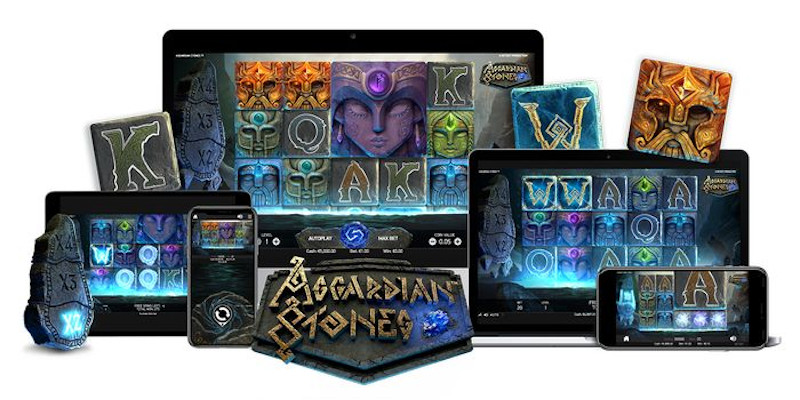 Asgardian stones are set across 5 reels and 20 paylines and feature avalanche mechanics meaning the reels do not spin. Instead, the symbols fall around each other filling any gaps left by winning combinations. This allows for a chain reaction of combinations to occur all in one paid spin. Only when there are no more winning combinations found will the next spin take place.

The Asgardian Stones can fall onto the board as big as 3×3, these Colossal symbols when part of a winning combination means colossal wins, of course! There’s also a randomly activated Colossal Crush feature. The Colossal symbol will crush rows of symbols beneath its weight. Increasing your multiplier count stone found on the left-hand side of your screen. You can receive a multiplier as high as x4 for 4 lines crushed. 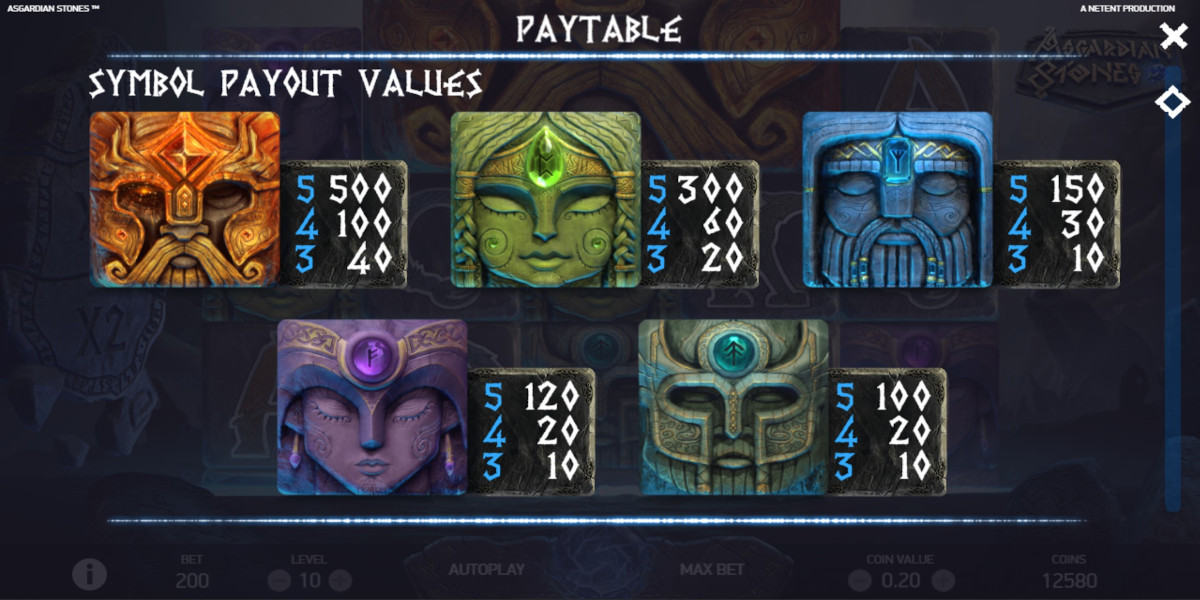 Upon the reels, you’ll see stone tiles with the typical card lettering, which count for your low-value symbols. The ancient gods of Norse mythology represent the high-value symbols. The highest gives you 25 times your stake when appearing over 5.

The W symbol represents your Wild in Asgardian Stones. It can substitute for all other symbols present on the board other than the Bonus Wheel.

Part of the Colossal symbol collection is the Bonus Wheel feature. The Bonus wheel can land throughout the game on reels 3,4, and 5 and is a 3×3 tile. It doesn’t have to land fully on the board either; it can still be triggered if it’s only partially seen. Once the Bonus wheel feature has played, it will explode, and your reels will refill rather than an avalanche taking place.

On the Bonus Wheel, there’s an array of prizes to be won, including cash prizes of up to 100 coins and several chances to win 5 Free Spins. Any cash win during the Bonus Wheel feature will be multiplied by up to 5 x worth the total bet. During each Bonus Wheel in which you can reactivate 3 times, you can collect up to 15 Free Spins.

Once the Free-Spins feature is in motion, the Wild can land in colossal size. Forming a winning combination with a Colossal Wild will see the combination explode and disappear. In its wake, it leaves behind two 1×1 Wilds in its place. They then remain on the reels to hopefully help form another winning combo. 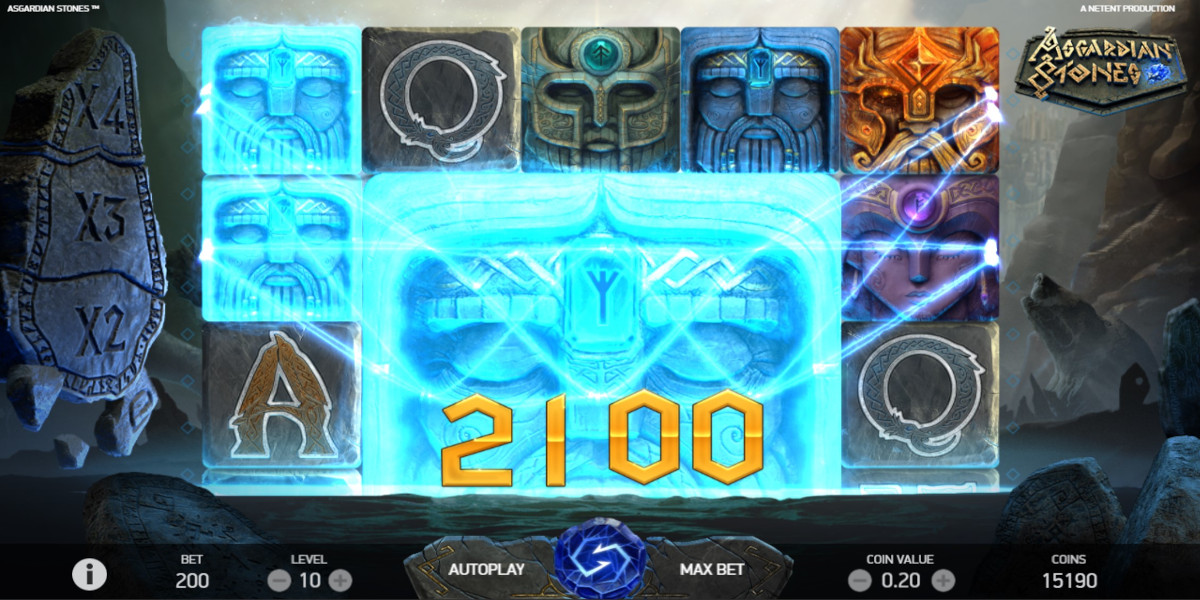 Asgardian Stones animated graphics are stunning. Every part of the game is incredibly detailed and meticulously designed to create a mystical and ancient atmosphere. You’ll feel like you’re under the watchful presence of the powerful Norse gods.

NetEnt Gaming always releases high-quality games, but this video slot is ‘wow’ worthy. It’s packed full of innovative features that will keep you entertained and gripped for hours. The most impressive of them all has to be the Avalanche mechanics paired with Colossal symbols. These features boost your chances of winning time and time again if the gods are smiling down on you.

NetEnt then took it one step further. They incorporated even more features into their Colossal symbols. The Bonus Wheel and splitting Wilds all fit seamlessly into the gameplay and are your most lucrative points of gaming. This is especially true if you hit the Free-Spins on the Bonus Wheel.

There are some very healthy stakes to be won throughout the game. For example, any coin win from the Bonus wheel will be multiplied, and you can receive up to 36 times your original stake. Through the base game and the Free-Spins feature, you can win a colossal 2,000 times your stake.

Asgardian Stones has a healthy RTP of 96.31% and is ranked as a medium variance game. This means that a little patience is necessary for those of you who want to hit a Mega Win. Realistically, you’ll win little and reasonably often.

Asgardian Stones is often compared to NetEnt’s other popular avalanche focused game, Gonzo’s Quest. However, we believe that it’s an unfair comparison. Each brings to the table an array of other features intertwined with the avalanche mechanics. 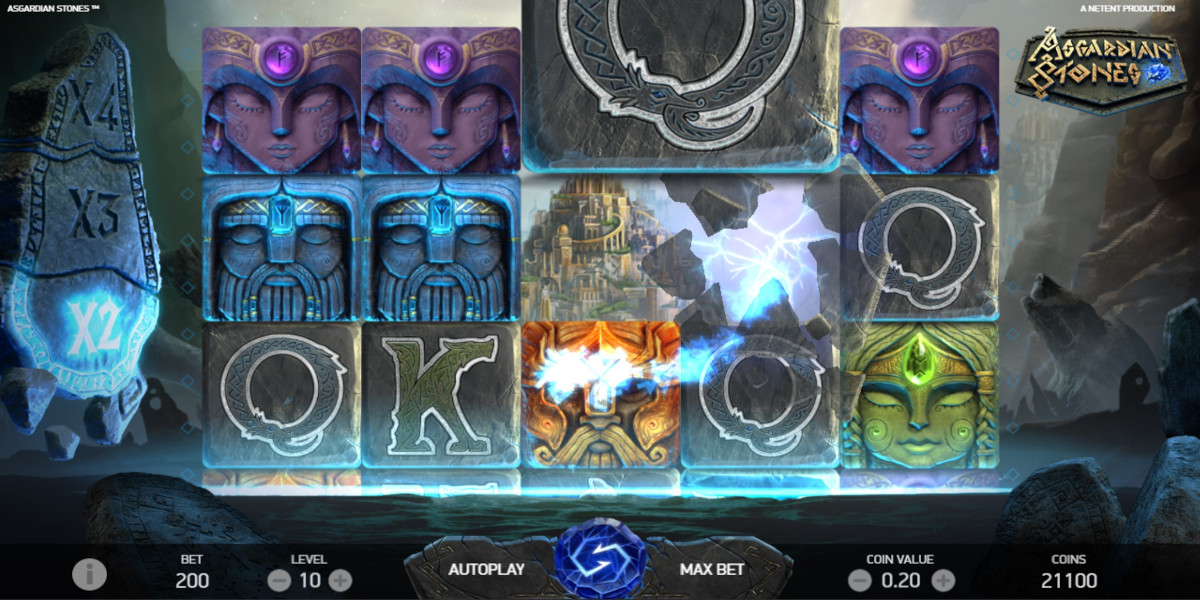 The incorporating of Colossal Symbols, the Bonus Wheel, and the splitting Wild all make for a new and fresh take on avalanche gaming. Amid this, there are also plenty of Free Spins, cash prizes, and multipliers to be won.

All of the above make for a busy game. Yet, no compromise has been made on the detailing of the theme because of the array of features. NetEnt has developed yet another top of the slot game that shouldn’t be missed; if you enjoy mythology and incentive takes on reel mechanics and special features, that is.