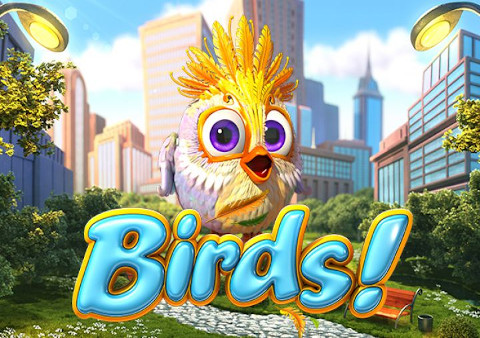 Slots with cartoon graphics have always been especially popular among online casino players no less than games on serious topics, especially if they are based on well-known computer games. BetSoft Birds! 3D video slot belongs to this type of games. Those, who know the cult Angry Birds, will certainly try it and at least have interesting and fun pastime.

There is no need for paylines, and up to 25 prize combinations are available during the game.

❓ What is the Birds! slot RTP?

❓ What is the bet limits of Birds! slot machine?

The size of the bet in the game with average volatility can range from 2 cents to €125 per active line.

❓ What is the maximum win on Birds! video slot?

The maximum win is 500 coins, which, with 25 possible winning options, promises a fairly large amount of payment.

❓ What are the special features of the Birds! slot?

Birds! slot machines has Wilds and Free Spins features. Find out more about these in this Birds! slot game review.

This funny and bright cartoon-like game developed in 2016 is still popular. The slot machine vivid graphics and pleasant atmosphere never leave anyone indifferent. The action takes place against the backdrop of a green glade, behind which there are skyscrapers of the big city rise. The birds are made in three-dimensional animation, characterized by unique images and behavior. Computer and mobile gamblers can enjoy entertaining gameplay and win real money or simply play it for free and rest.

As all BetSoft games, Birds! uses English as a default language. Those, who choose it, find out that the prize combination of symbols is formed not on the reels, but on the wires. As the gameplay develops, birds fly in and out with these wires. The more identical birds the gambler collects, the more money he will win. Traditional combinations of 3 identical characters will let him do it. As soon as three similar birds’ icons have gathered, they fly away, and others appear in their place. If there are no identical feathered creatures, the rotation continues — the birds on the wires change places. 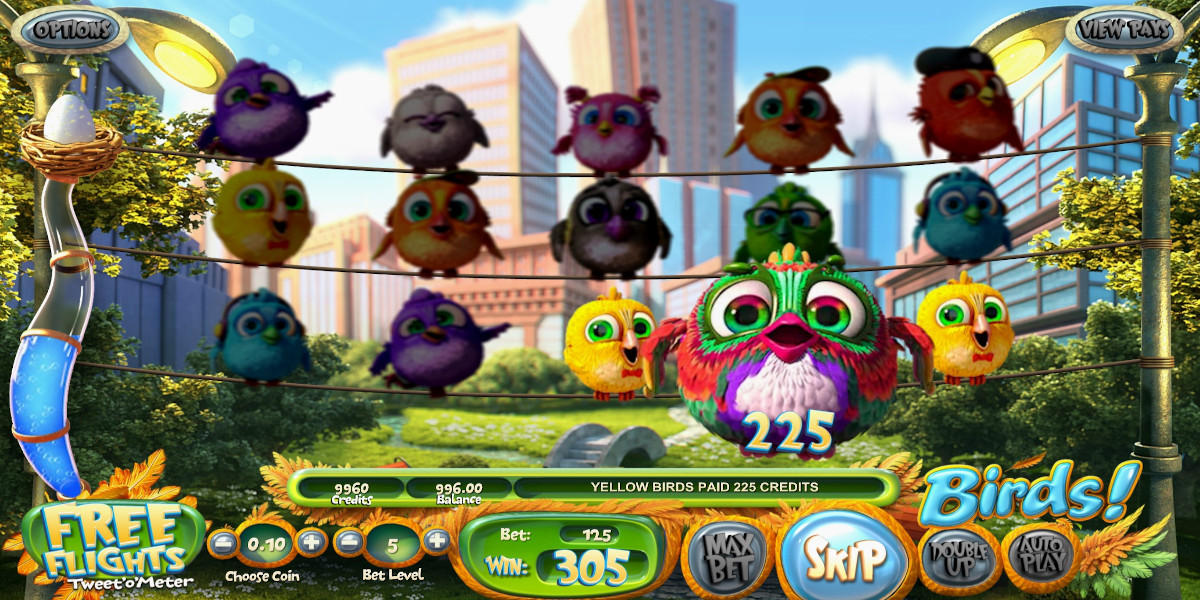 There are no lines in Birds! Instead, it is proposed to adjust the level of the bet. The gamer is practically unlimited in it, so everything is built solely on luck and the mood of fortune. One can activate the Max Bet function when all the money from the deposit is used. In this case, the luckiest gambler has a chance to get the coolest award.

This video slot is supplied exclusively with bird symbols. There are no card and letter icons here. Birds differ in color, size, and face value of payments.

The most valuable bird is a yellow creature with a large crest. If it hits the screen, the player can count up to increasing the prize of 500 bets. To do this, he needs to get at least 5 yellow chicks. The simplest symbol is a gray bird, which increases winnings 10 times. 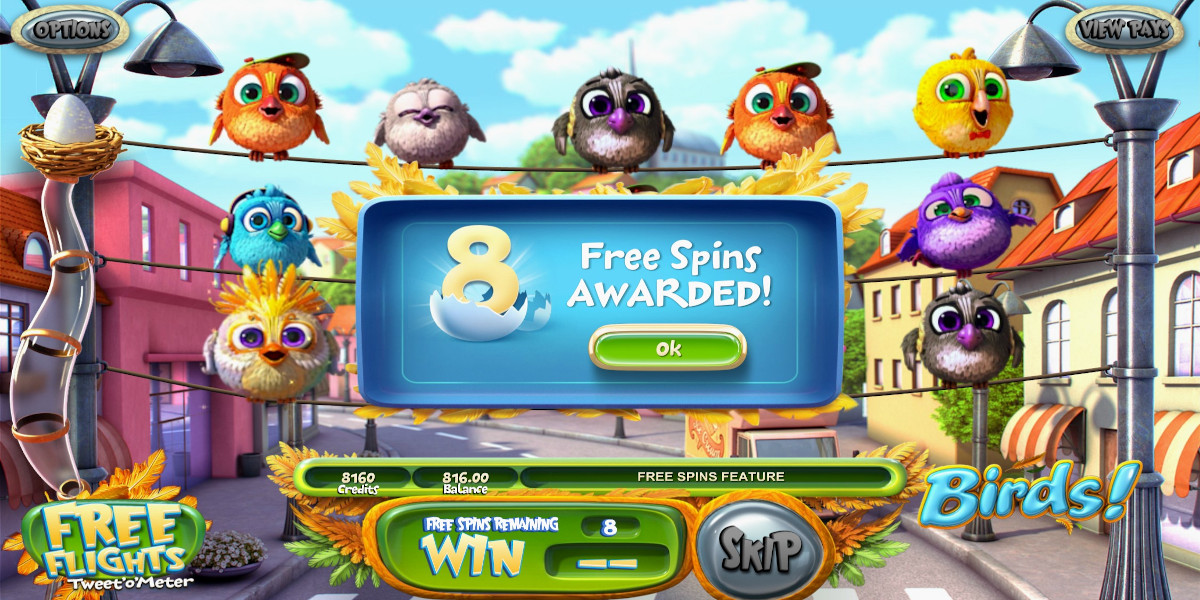 Bonus options of the slot machine are represented by the following functions:

The number of free moves is determined by the player’s luck. If he collects winning spins 6 times in a row, he can get the maximum bonus, and this is 20 spins.

Birds! slot has a special place in the line of gaming software from BetSoft Gaming. The uniqueness of it is that the machine is not equipped with reels or lines. Instead, the developers propose playing on the “wires”, where the birds, the main characters of the game, settle down. Starting the game, the user activates the birds, which begin to fly and land in certain cells on the wires. When the spin is made, all the birds fly apart and new ones fly to the next spin.

Although there is no jackpot here, the unusual structure of the slot makes thousands of people choose it. They prefer to play Birds! both for money and for free.

The size of the bet in the game with average volatility can range from 2 cents to €125 per active line, which allows considering the slot universal, both for beginners who prefer a cautious game and for gamblers who make maximum bets for big wins. At the same time, it does not have reels and paylines in the usual sense for many players. The entire field is divided into cells forming cascading coils, where colorful birds sit on wires. With this structure, there is no need for paylines, and up to 25 prize combinations are available during the game.

Despite the rather unusual and, at first glance, complex functionality, the game Birds promises quite generous payouts. In particular, the rate of RTP is 95.64%, which is higher than the average. At the same time, the maximum win is 500 coins, which, with 25 possible winning options, promises a fairly large amount of payment. 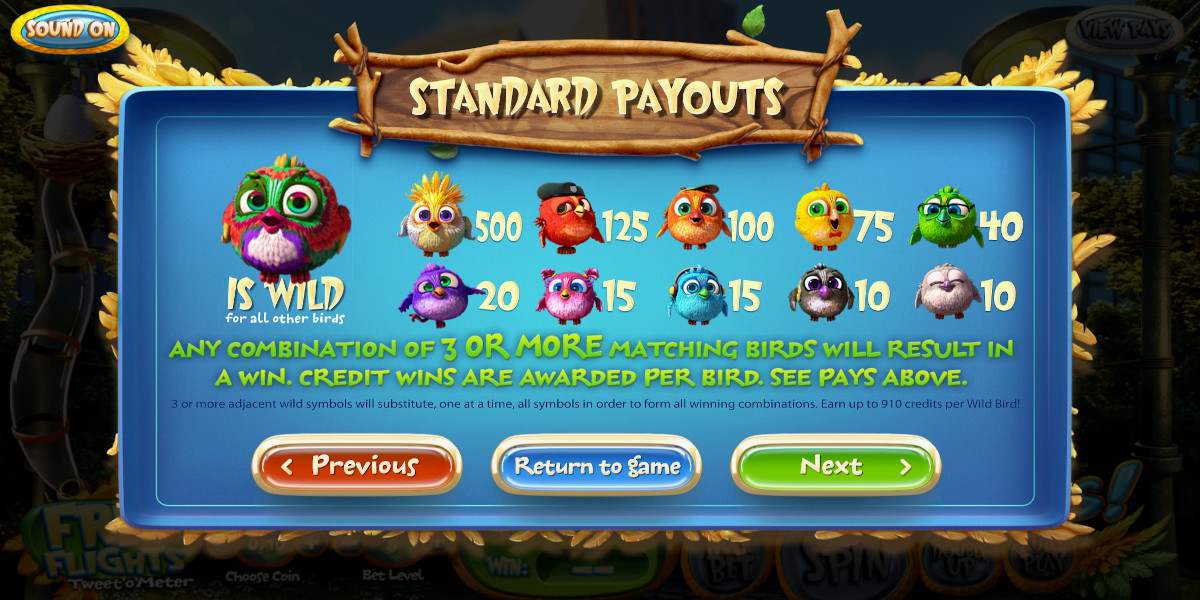 Having received 4 wins in a row, which, as it turned out, is quite realistic to do in Birds, the player gets a bonus in the form of Free Spins. In addition, most gamblers can always try to double the money earned in a risk game based on the principle of a popular coin “heads and tails” game.

Those, who used to play popular Angry Birds, pick this BetSoft slot most often. Enjoying funny gameplay that resembles the mobile and computer game released 10 years ago, they “return” into the happy past. However, modern slot functions let them have even more fun and earn money today.

Although everything that happens in the game can be called the adventure of famous birds in a small picturesque town with colorful houses and cozy streets, this is a serious game with good winning options. It has great 3-dimensional graphics as well as quite an interesting functional with many original functions, which will surprise even professional gamblers.