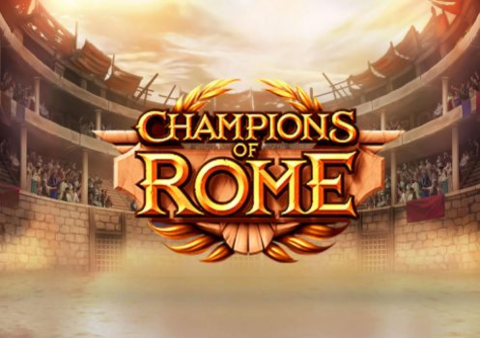 Get lost in all the excitement of ancient Rome’s Colosseum. Prepare for the action between mighty gladiators and ferocious beasts as weapons gleam in the ultimate bloody battle.

With its multiple awards and action-packed gaming options, it seems Yggdrasil Gaming has created Champions of Rome slot game for everyone to enjoy.

The aim of the game is to get as many extra Wilds on screen as possible. A gladiator is chosen to fight for you, and his weapon is sent across the reels to create Wilds. There are many different Bonus features, each with their benefits and risks.

The Gladiator feature has three weapons that are thrown at the reels to create Wilds, the type of which depends on the randomly chosen color. This Bonus feature is activated by landing on 2 Free spins. If the Free spins feature is already in play, it will throw the weapons on every spin.

The Free spin game is activated by 3, 4, and 5 “Free Spin” symbols, each with an additional coin bonus (20, 300 and 1200 coins respectively). These Free spins are available in 2 different modes.

The Training Mode has no win targets, and any coins won will be awarded, though without any multipliers.

During Deathmatch Mode, a minimum of 450 coins are awarded. Before starting, you are asked to choose between the various spin/multiplier combinations:

7 spins with an x2 multiplier;

6 spins with an x3 multiplier;

5 spins with an x4 multiplier.

If you do not reach the minimum win target, a consolation prize of between 40 and 200 coins, or 5 Free spins in training mode will be awarded.

During both of the Free spin game modes, the beast may appear on reels 2, 3, and 4. All high-paying symbols are then replaced by the chosen gladiator who throws his weapon to award Wilds in each subsequent spin. If the beast happens to be hit by the thrown weapon, an extra spin will be awarded.

If you don’t want to wait for the required symbols, you can activate the Free spin games by paying 1000 coins. All of the previously stated rules will apply, but the additional coin Bonus will then fall away.

There are a total of 13 different symbols to be found in the game. Various colored shields represent the 4 low-paying symbols. The 3 medium-paying symbols are depicted by images of Greek mythological creatures (Gynosphinx, Minotaur, and Griffin.) The gladiators represent the 3 highest-paying symbols, although the Wilds awarded with each color still differ. The red gladiator’s sword awards a 2×1 and 1×2 Wild when it hits the reels, the green gladiator’s mace gives 2×2 Wilds, with the blue gladiator’s trident offering 4 random Wilds. Should you land on your gladiator’s unique Wild formation, it adds 4 Wilds to the screen.

As mentioned previously, the beast (awards an extra spin when hit with a weapon), the Free spin (a minimum of 2 needed to activate bonuses), and the wild cards (substitutes all regular symbols) represent the special symbols.

What Makes the Game Special?

This game features high-quality graphics, smooth animation, and an excellent 16:9 aspect ratio, so it looks great in landscape view on supported mobile devices. The soundtrack and sound effects evoke everything you would expect to experience if you were sitting in the arena in real-life. The clanging of the weapons, cheering crowds, and bellowing trumpets all contribute to creating a heightened open-air, gladiatorial atmosphere.

The game is compatible with all major browsers including chrome, firefox, safari, and edge. Its compatibility across Android and Apple devices makes it possible for you to jump into the arena whenever and wherever the urge may take you.

The game layout consists of 5 reels with 20 paylines paid from the left. The Champions of Rome slot game has a theoretical RTP (return to player) of 96.4% and has a medium volatility rating. Although, when taking the flexibility of the Bonus features into account, this rating increases somewhat.

If you are looking for an entertaining and exciting slot game to play, then the Champions of Rome by Yggdrasil should be your first stop. What the game may lack in minigames, it makes up for with its various Bonus features. Whether you choose to play it safe or risk it all, this game offers something for everyone. Choose your champion and let the games begin.