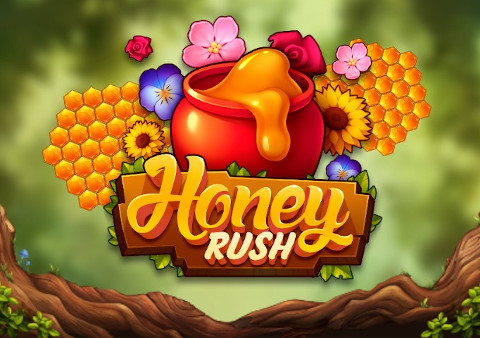 Play’n GO has previously released several gambling games in which the playing field consists of numerous cells, and combinations are formed according to the principle of clusters. On the developer’s site, such models are designated by the term gridslot (eng. Grid – “grid” and slot – “slot”).

This is a cluster pays slot. More about it in this review or just try Honey Rush slot DEMO and understand what it is immediately.

❓ What is the Honey Rush RTP?

The volatility of this slot is rated as medium level. It lets you get Honey Rush Big Win amount quite often.

❓ What is the bet limits of Honey Rush video slot?

❓ What is the maximum win on Honey Rush game?

The slot lets you win up to 9000x your bet. Try Honey Rush DEMO slot and prepare to gamble it in best online casinos!

❓ What are the special features of the Honey Rush casino game?

Find out more about all of these in our Honey Rush slot review.

In the fall of 2019, the famous studio introduced another device that operates on the same principle. This is a Honey Rush slot machine dedicated to bees and honey. The review examines all its characteristics and tells what makes Honey Rush especially interesting. 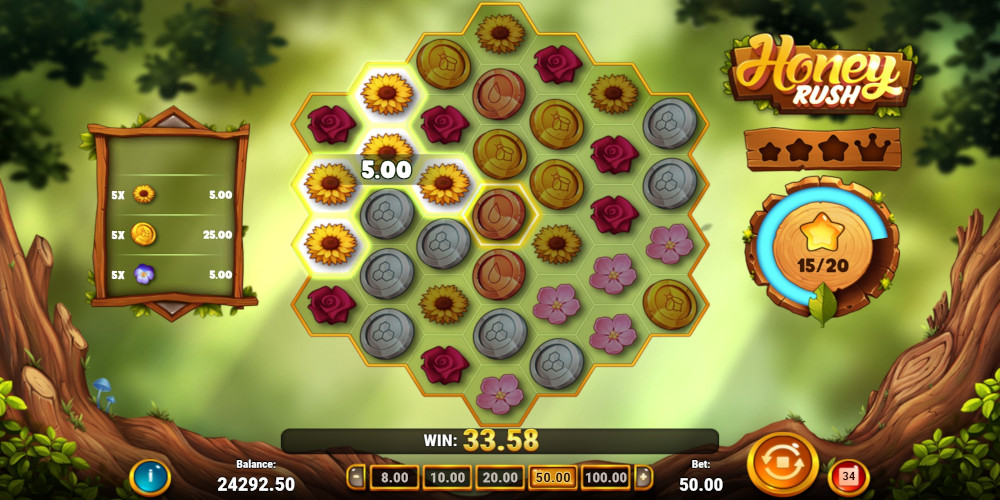 Lovers of sweets and honey should definitely appreciate the colorful Honey Rush slot machine. The playing field of entertainment is made in the form of honeycombs, which are located against the background of trees. Each player can help the bees to increase the amount of nectar and get a cash prize for this. Chirping birds and relaxing music set you up for an exciting honey harvest with gambling rewards.

The peculiarities of the mechanics include the absence of lines and classic reels; here there are clusters. A winning combination is counted when adjacent symbols from 5-37 cells match.

In the very center of the hive there is a unique cell marked in yellow, the symbol in this cell will expand during the bonus spin, depending on the function that is running.

If during the spin there is no winning combination, then the “Worker function” can be activated in a random order, the symbol in the yellow cell will be multiplied from 7 to 15 symbols.

On the right side of the screen there is a character counter, which has 4 levels with different functions:

It should also be noted that Wild symbols can appear with multipliers – x1, x2, x3. 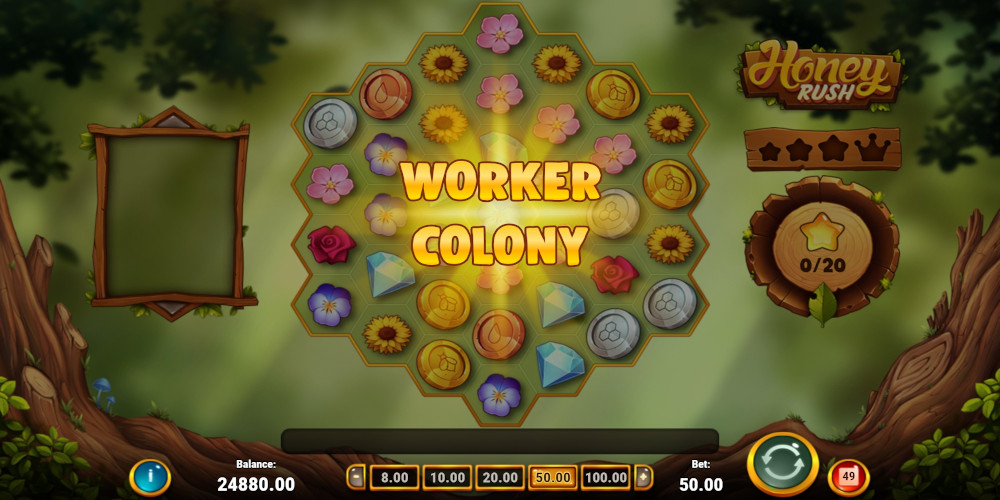 There are eight standard icons: four flowers, three coins and a diamond. Theoretically, the same pictures can fill even all cells on the field.

Both jokers participate in the Sticky Wild Feature. The rules are discussed below.

There are no classic scatters. The payouts for all combinations are published in the table. 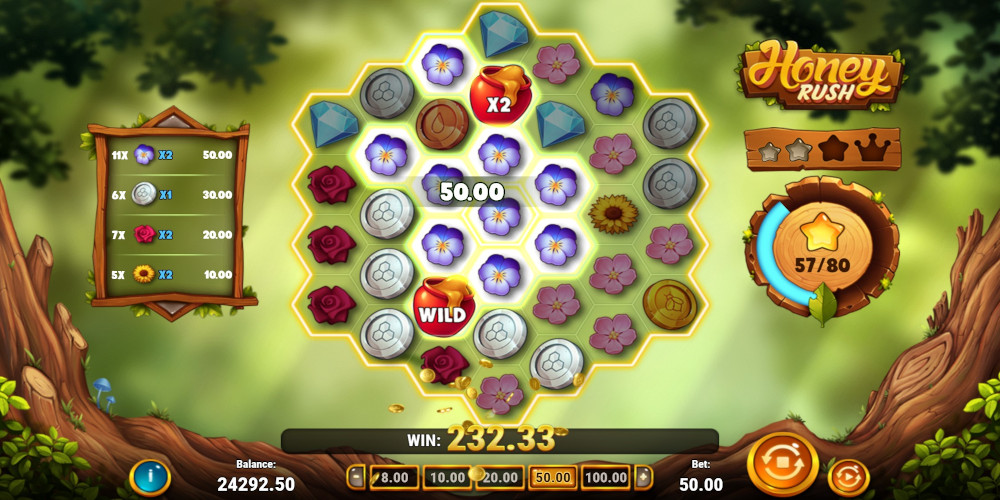 In Honey Rush, as in Hugo slot, it is worth playing after learning the symbols of a video slot with an entertaining storyline. The unusual principle of the formation of sweet combinations does not prevent the colorful symbols from encouraging the miners of forest sweetness with the following wins:

The spring atmosphere of the emulator, which is dominated by green colors, is complemented by a special symbol. Wild in the form of a red pot of honey draws attention to itself and increases the size of the potential win several times. The magic pot not only drops out on the reels, but can also move along them during several consecutive spins. This is not the end of the Honey Fever slot machine bonuses. Hunting for a gambling delicacy would not be so exciting without a swarm of worker bees. A close-knit team sometimes appears after lost spins and creates a paid cluster. The drones, as well as the queen of the virtual hive, make their contribution to the user’s winnings. Their appearance is associated with reaching a certain level on a special game scale, and is guaranteed to give rewards to slot hunters who never cease to fight for sweet prizes. 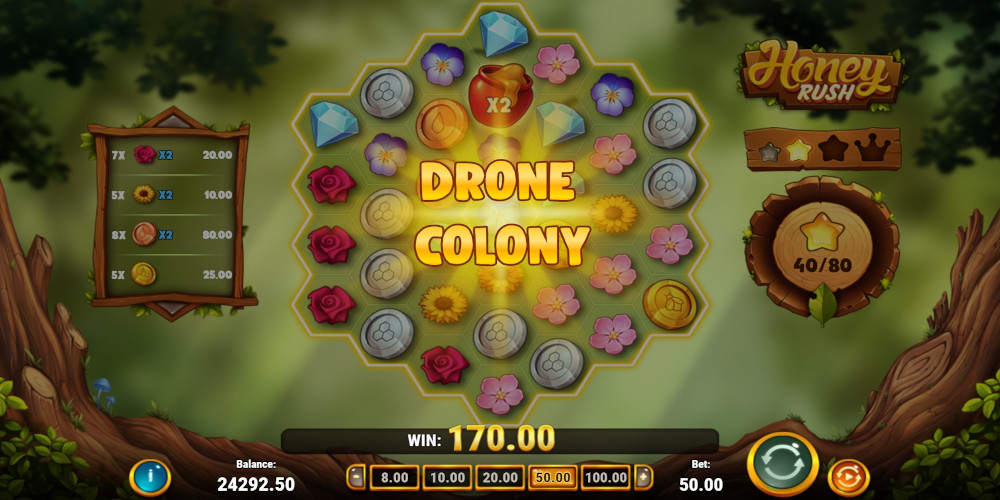 Rush counter – with its help additional modes start to operate. For this, it must be completely filled. There are four levels in total, and in order for them to be activated, you need to accumulate a certain number of points:

At the end of the winning combinations, the game mode starts.

During this function, the center symbol is cloned and a new cluster appears. After that, the level starts as usual:

The wild symbol appears on the reels and replaces all images. In this case, all payments of the player will be multiplied by x2, x3. If Wild is adjacent to the prize symbols, it is shifted to the adjacent cell.

Honey Rush was developed in 2019 by Play’n GO provider. The slot is dedicated to the theme of wildlife: gamblers get to the bees, where they will have to gamble. The slot machine is made in the form of a honeycomb with bees flying in the background.

The RTP of the video slot is 96.54%. The final payoff is increased by the Colony Feature option: the system copies the central cell to several neighboring cells. We recommend starting to play with minimal bets so as not to lose the game balance right away. Increase rates gradually.

The video slot has an avalanche system of falling out cards. This means that a user can win several times in one spin. When a winning combination appears, the system highlights it and removes it from the field. In place of the empty cells, new ones appear. The avalanche system operates as long as there are prize combinations.

Wilds appear only when the indicator is filled. It does not drop accidentally on the reel. Clusters of diamonds bring the greatest gains, the smallest – from flowers. 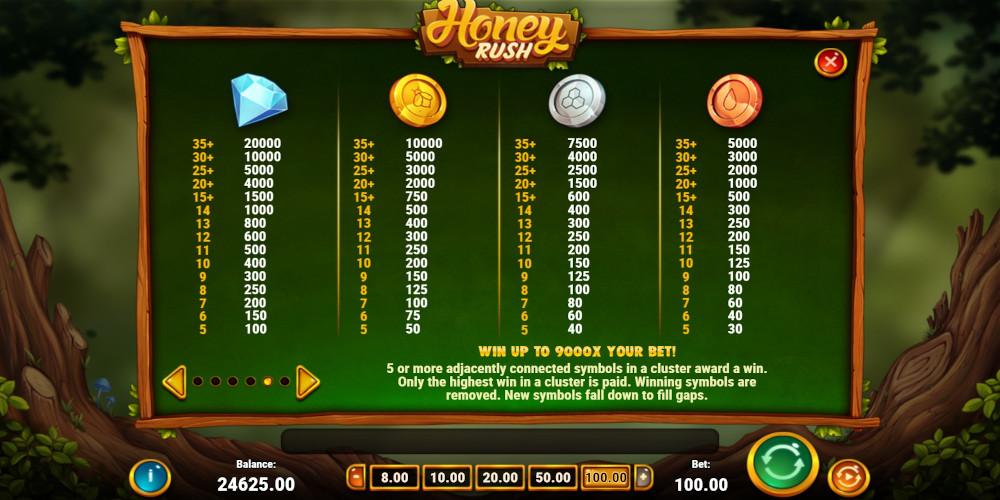 The important advantages of this slot machine include:

Yes, it is Honey Rush’s highest dedication that is noted by both novices and experienced Frank players. Think about it: you just have to follow a simple algorithm of actions – and your wallet has already substantially arrived!

On the whole, Honey Rush is a great example of a combination of bright colors and pleasant sounds, created specifically for maximum immersion of the gambler in the gameplay! Just try Honey Rush free play DEMO at the top of this review!