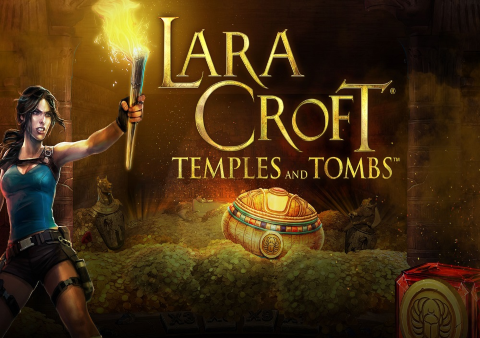 The word is out, and fans of the highly acclaimed Tomb Raider series are going to be ecstatic with Microgaming’s new release Lara Croft Temples and Tombs slot game.

This new online slot features 5 reels and 243 paylines and has been developed by Triple Edge Studios who is one of Microgaming’s most loyal partners. It has a Rolling Reels Feature which in turn brings some generous winning Multipliers of up to 15x your bet.

There are also Free Spins where you could win up to 7343x your stake as well as lucrative Jackpots which have 3 Jackpot prizes, those being the Grand, Major and Minor Jackpots.

This slots Grand jackpot can pay up to $100000 but due to its high volatility it can be quite generous and pay out more.

Start unravelling Lara’s Book of Secrets to the Temple of Riches by entering the mystical tombs and glorious Temples.

The wagers that can be set up have to consider all the ways to win. They have done this by using the equivalent of 20 paylines and betting can start from as low as $0.20 per spin to a maximum amount of $20 per spin.

High Volatility is the name of Lara Croft and it has an RTP of 96.05%.

The symbols appear to be set in stone blocks, and on the reels, you will see backpacks, water bottles, grapnels and torches.

The more lucrative of the symbols are the two stone statues and Lara herself who you will find depicted in various action modes, for instance jumping with her gun, careering around on a motorcycle and lastly in portrait form and this symbol yields you 50x your bet for 5 on a payline.

The Wilds in Lara Croft Temples and Toms are the Scarab Beetles.

The Scatter Symbol is the Book of Secrets.

This is when symbols fall from above and those being part of the winning combination dissolve and are replaced by new symbols. This allows for recurring wins from each spin which in turn increases the Multiplier by 2x, 3x reaching up to 5x your bet.

The Free Spins Feature is activated when you land 3 or more Scatters on the reels and can get between 8-32 Free Spins.

The Free Spins start with a 3x Multiplier and each consecutive spin increases the Multiplier to 6x, then 9x and finally 15x.

This feature can also be retriggered which will then give you a further 8 Free Spins each time you land three Scatter Symbols, in total you could be rewarded with a whopping 80 Free Spins.

During your gameplay Wild Symbols are collected which increase your chances of triggering any of the three jackpots. When and if it is randomly triggered you could win the Minor, Major or Grand Jackpot which are worth 15x, 100x and 5000x your bet respectively, meaning you could be walking away with one of the may treasures hidden within the Tombs and Temples.

This new Slot, Lara Croft Tombs and Temples is a huge improvement from its predecessors and graphically it looks amazing.

The new features, the Rolling Reels Feature with Multipliers is enticing as are the Free Spins with a potential Multiplier of 15x all allowing for you to walk away with some lucrative winnings.

Don’t forget the 3 Jackpots which all are up for grabs, now it’s up to you to join Lara on her quest to unveil a world of treasures whilst enjoying a glorious adventure.