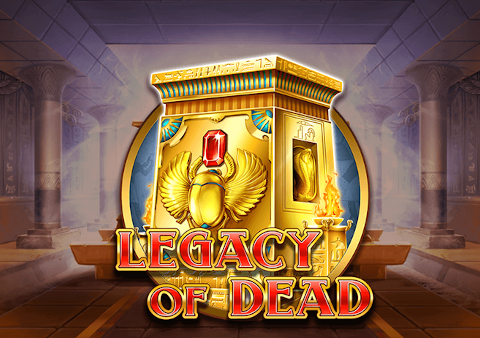 The portfolio of Play’n GO has several video slots about the legendary Book of Dead from ancient Egyptian myths. The studio periodically returns to this popular topic and pleases its fans with new gambling games about the powerful pharaoh, who has long since gone to the forefathers. The restless mummy is tempted in the next world, and she constantly tries to return to the world of the living in order to regain power and wealth.

The slot game has 5 reels and 10 paylines.

❓ What is the Legacy of Dead RTP?

❓ What is Legacy of Dead online casino slot volatility level?

This is a slot machine with a very high volatility (10/10). Try Legacy of Dead DEMO and make sure that you want to gamble it on new online casino sites.

❓ What is the bet limits of Legacy of Dead video slot?

❓ What is the maximum win on Legacy of Dead slot machine?

The slot game let you win up to 25,000 coins. Try Legacy of Dead Free play DEMO at the top of this review page.

❓ What are the special features of the Legacy of Dead casino game?

Read more about all of these features in our Legacy of Dead slot review.

In the Legacy of Dead slot machine, the monarch who has risen from the dead makes another attempt to ascend the Egyptian throne.

Yes, yes, yes, you heard right, the slot machine is another mix of Play’n GO online video slots with an Egyptian theme and expanding symbols. It looks very strange, since slots with overlapping names and similar gameplay are increasingly appearing in the developer’s portfolio. Suffice it to recall the previously released games, including Doom of Egypt, Legacy of Egypt, Rise of Dead, Book of Dead, etc.

This time, the Play’n GO developers presented to our attention the Legacy of Dead slot machine, which combines the names of two other games Legacy of Egypt and Rise of Dead, and what came of it we will tell below.

This is a 5 reels slot with 10 lines and fifteen picture slots on the field. The client can use any number of active lines.

To get a payout, you need to collect a continuous chain of the same images on any of the active lines. It should start from the first reel. The longer the sequence, the more valuable it is. Only the maximum option for each position is always taken into account.

Winnings are calculated at the current bet per line. It is multiplied by a special coefficient assigned to each of the available combinations (from x5 to x5000). If there are several payments, they are summed up. Try Legacy of Dead slot Free DEMO at the top of this page!

You can try to increase the received money. The entire amount or half of it is accepted at stake. There are two options:

The error deprives the player of money. Limits apply depending on the rate.

The heroes of the Legacy of Dead slot machine have also long been known to everyone: the Pharaoh who returned from the other world, the sun god Ra in the form of a falcon, Anubis in the form of a dog. Other icons also appear on the screen: a statue, number 10 and the letters A, K, Q and J. Symbols are not stacked.

There is only one special icon:

The highest paying combination in Legacy Of Dead consists of 5 images of Tutankhamun (5000). It is following by a symbol with Pharaoh (2000), Anubis (750), Horus (750). Images in the form of card symbols allow you to earn 100-150 credits. In the case of playing for real money, you can withdraw winnings to a bank card or electronic wallet.

The scatter is represented by a scarab symbol, it pays by itself and brings up to 200 coins. The special symbol acts as a Wild and substitutes for other images if it is possible to collect a paid combination. Three or more Scatter symbols trigger 10 free spins.

Free spins are discussed in detail in the reference section, which is attached to the slot.

Eight free spins run at the rate selected before the bonus was activated. During bonus spins, an expanding symbol is randomly determined, which occupies the entire height of the reel when forming a paid chain. If the bonus is re-activated, another expanding symbol appears. In total, there can be up to nine of them per prize round.

Apparently, slots about Ancient Egypt do not bother players. As long as there is demand for them, developers will not stop releasing new thematic models. Play’n GO, which has a special passion for this direction, will definitely not give it up in the near future.

This is a slot machine with a very high volatility (10/10). By default, RTP Legacy of Dead is 96.58%, but the developer provides operators with the ability to reduce this figure. Check the return rate at online casinos where you will be playing for real money.

The main feature in Legacy of Dead is that every time you restart the free spins there that will be a new symbol will open up that will act as a special one. It turns out that theoretically, you will have the ability to make all symbols special, which means the chances of filling the entire playing field with one symbol increase significantly.

All in all, Legacy of Dead is another cool slot machine by Play’n GO with familiar themes, symbols and functions. If you like book-style slots, then the Legacy of the Dead slot machine will surely work for your impression.