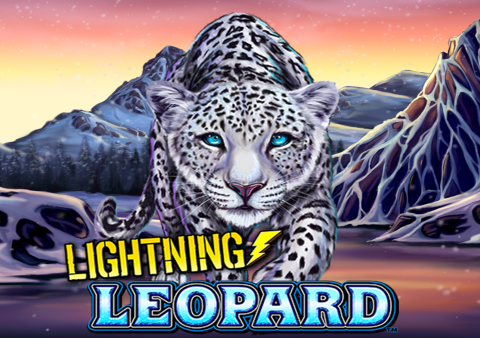 Play for real Play for fun

Lightning Leopard Slot game – How to play and Where to play?

Here we join the very rare Snow Leopard as he ventures on a quest in search of his next hunt with Lightning Leopard slot game by Lightning Box.

This rugged mountain scene deep in the deathly cold winter of North America is a place where only the strongest survive amongst them the bears, wolves and off course the snow leopard.

This slot will warm you up with its Lightning Re-Spins and Re-Triggers that can evidently lead to wins of up to 2000x your stake.

Finally, they say Lightning never strikes twice, well besides the Free Spins and Bonuses you may also strike it rich with one of Lightning Leopards 4 Jackpot prizes. 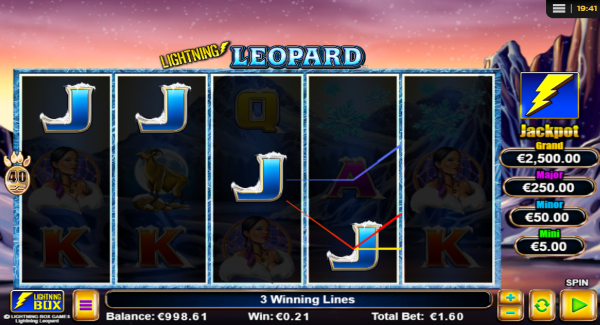 This icy adventure begins at $0.40 to $50 per spin and for a single five of a kind pays outs you could receive between 0.5x-15x your stake.

On the low level of paying symbols you will find the commonly used playing cards J-A, followed in ascending order by Ice Crystals or stalactites, a Wolf, Mountain Goat, Brown Bear and the Female Native American Woman, she pays 705x your stake if you land 5 of her on a payline.

The top paying symbol is the Wild.

The Lightning Bolt symbols are the Scatters and 6 of them trigger the Re-Spins Feature.

The Wild Symbol is represented by The Snow Leopard and he can substitute for all other symbols apart from the Scatter. Land 5 Wilds in a payline and you’ll walk away with 15x your stake. 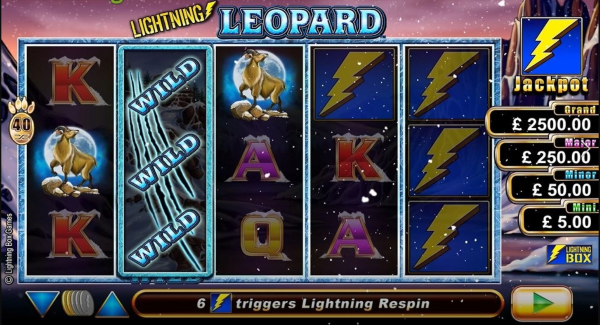 The above Feature is triggered when you land 6 or more of the Lightning Bolt Scatters on the same spin. Three spins will be awarded from the triggering spin locking into place. Should lady luck be on your side and you manage to get any subsequent Lightning Bolts they too are held, and the re-spins are reset to 3.

Once all the re-spins are complete the Scatters flip over to reveal a cash prize and added towards your overall pay-out, now that’s flashy!

This Flippin Feature happens when you manage to fill the reels with 15 Lightning Bolts and when that happens it triggers the Flippin Retrigger Feature flipping all the Lightning Bolts again and another payout is made.

This Jackpot can be arbitrarily triggered at the end of Lightning Re-Spins or the Flippin Retrigger Feature.

There are four potential Jackpots and the one everybody wants to hit is the Grand Jackpot which offers payouts of between $2500 and $62500 depending entirely on your stake. 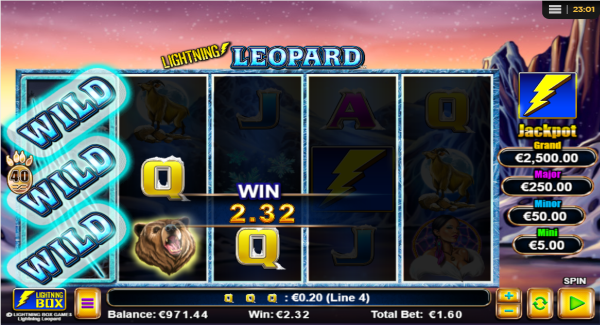 The animations on this Lightning Box slot are stunning however the graphics not at all flashy.

Overall it is a pleasant slot with smooth gameplay which can produce medium to big wins regularly, and let’s be honest that’s the nature of this beast be he in the form of a Snow Leopard.

Get ready for a journey into the cold, icy wilderness and be enamoured by the warmth this slots potential winnings bring.