Pool Shark Slot game – How to play and Where to play?

This is a brilliantly designed billiard driven slot by Habanero consisting of 25 paylines and 5 reels.

Pool Shark slot game is based on an underwater pool tournament, with sharks gathering around the table to have a game of billiards.

The colours are clear and crisp, and the design is attractive and enticing and once you start playing you will find it rather engaging and a holds a certain charm.

There will be air bubbles floating to the surface and you will feel the effect of being in a cabin of a sunken ship, encased in the tank are the reels enhancing that graphically immersive gameplay.

Pool Sharks sound effects are very detailed and well thought of, underwater thuds can be heard, which are extremely realistic and for the big wins the Blues are played adding some extra soul. 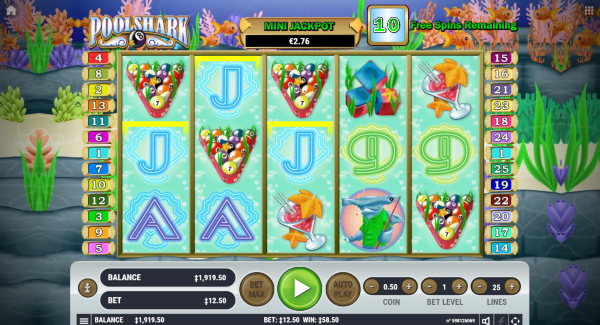 Habanero decided to investigate Pool Sharks as they are considered to be the most dominant players in this game and however the pool shark in this slot is far removed from the pool shark you would find on the felt top as depicted in the American movie The Hustler.

The Pool table is what you will find in the background and the colours are magnificent and depict the underwater them brilliantly. You will find the lower paying card symbols which have been created in neon light form.

There are waiters that are the lobsters, drinks, a Hammerhead pool player, billiards and the Pool Shark darting around the reels.

Pool Sharks Scatter Symbol is the Black Ball of 8, landing 3 of the Blackballs will reward you with 12 Free Spins and it can grant Multipliers.

The Pool Shark himself acts as his slots Wild Symbol and he can replace all the other symbols except the Scatter Symbol and has 5000 coins as its jackpot.

Wins to Rack up

There are some nice Bonus Features in Pool Shark and the Wild brings some nice prizes, land the Hammer Head Shark on reels 2, 3 and 4 and the symbols will be changed into other symbols creating a winning payline, and the Wild can also double your winnings.

Landing 3 or more of the Black Balls will trigger the Free Games Feature, this will be one of your most rewarding game of pool you’ll ever get to play. Why you ask? Well there are various levels of Multipliers thrown into the mix, for example for every 3 Spins the Multiplier will increase to 5x. 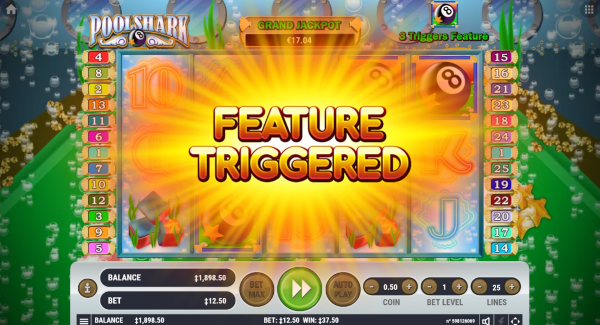 Pool Shark by Habanero is a rather unique them and extremely innovative as they have taken the name in a literal sense and developed an extremely enjoyable slot.

It is filled with fascinating gameplay features and it is a game that is an out of the box take on a Pool game and if that’s what you are looking for then Pool Shark is the game for you.