Release the Kraken slot review – Where to play slot DEMO? Which casino is the best to play?

Release the Kraken is a new slot game by Pragmatic Play that exercises pure gambling excellence. The aesthetically stunning world is inhabited with expertly animated sea-life and a shipwreck. The atmosphere of the casino game is so pleasant that everyone should feel comfortable exploring the ocean’s mysteries.

The base version of this slot game has 20 paylines. However, it could be increased up to 40 during Free Spins.

❓ What is the Release the Kraken slot RTP?

Like most of the Pragmatic Play slots, this one has a 96.5% of RTP rate. Try Release the Kraken slot DEMO at the top of this page.

❓ What is Release the Kraken Pragmatic Play slot volatility level?

The volatility of this slot game is rated as medium to high.

❓ What is the bet limits of Release the Kraken video slot?

❓ What is the maximum win on Release the Kraken casino game?

The most lucrative symbols are the Wild and the game’s logo, where a winning combination of 5 awards the player €2,500.

❓ Is Release the Kraken slot game has Free Spins feature?

✔️ Yes! And during Free Spins, you will get more ways to win (40 paylines). Find out all detailed information in our Release the Kraken slot review.

Pragmatic Play isn’t just another game provider, as there is a lot more heart to its vision of the perfect slot. Fundamentals such as 5 reels, 20 paylines, 11 symbols, and a Wild remain, but this is much more than just any other slot. It is about intimacy, journey, and, most importantly, fun. Here is a detailed review of Release the Kraken.

Chasing the winning combination should be saved for the tenth or twentieth play. For the first few rounds, you should dedicate your time just to have fun with the game. Release the Kraken is special and will keep you coming back for more. This online casino game supports more than 20 different languages. The game’s soundtrack is nothing short of exceptional, but might put off the player, so that thank the game provider for the mute button.

The controls are easy to understand and use. You press a button here and there, and all the game mechanics work effortlessly to provide you what you need to win big. Once you get to the second round of playing, you’ll relay nail down the controls. For instance, the betting management controls allow players to keep tabs on the stake they have in each spin and adjust to meet their style and strategy. 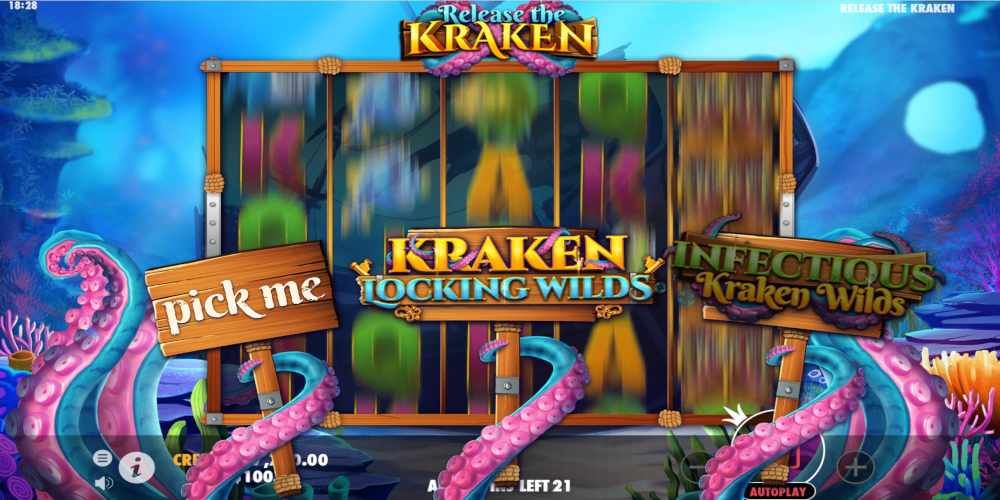 There are 11 symbols, each with a carefully crafted score attuned on the number of a particular symbol. First off, you have the game’s logo as the most lucrative symbol. Next, you get a selection of colorful fish, a turtle, and a shark. From there, this game starts to shape itself into a gambler’s jewel with the typical card symbols, such as Ace, King, Queen, and Jack.

Buckle up because this is where things get more exciting. The gameplay is further intensified by the inclusion of a Wild symbol and 3 different Bonus symbols. These are the characters that will ensure you an unprecedented experience. Of course, the adrenaline dispensed early on is relative, but when the stakes continue to rise, and the prize becomes astronomical, then you know that Release the Kraken means business.

The Kraken is the Wild symbol. It will appear in place of everything, except for the bonus, Free Spin, and chest bonus symbols. The Wild symbol will figure anywhere on the paytables. Players who hit the jackpot with 3, 4, or 5, wild on the reels can earn 2.5×, 10×, or 25x the amount bet for a single spin, across the payline.

Release the Kraken presents some interesting random spin features. The Infectious Kraken Wilds is active for a single spin and infects the surrounding symbols in a cross shape. The Colossal Kraken Wilds is also active on one spin, guaranteed to appear on 3×4 sizes in view or full. The Kraken Locking Wilds include the Wild symbol, and it is locked in place until the end of the feature. The player has to select an item for each stage as it is reset, and a prize is revealed. Returns to the player’s (RTP) stake are calculated after all changes are complete.

Unfortunately, this slot does not have a scatter, but it should be noted that this has a less profound effect on the game itself. There is, however, a Bonus symbol during base games on the 1st and 3rd reels. In the presence of an SH symbol on the fifth reel, it leads to the Sunken Treasure Bonus. The multipliers can be anything from 2x to 25x and are added up together when the Collect symbol is revealed.

Release the Kraken presents an unusual and exciting proposition to the enthusiastic player. This is a triple-A mainstream game right here. What lurks beneath that façade is a brutal game that will keep you coming back for more shots of adrenaline. Succeeding in such a framework should give even the most experienced gambler an immense sense of achievement. 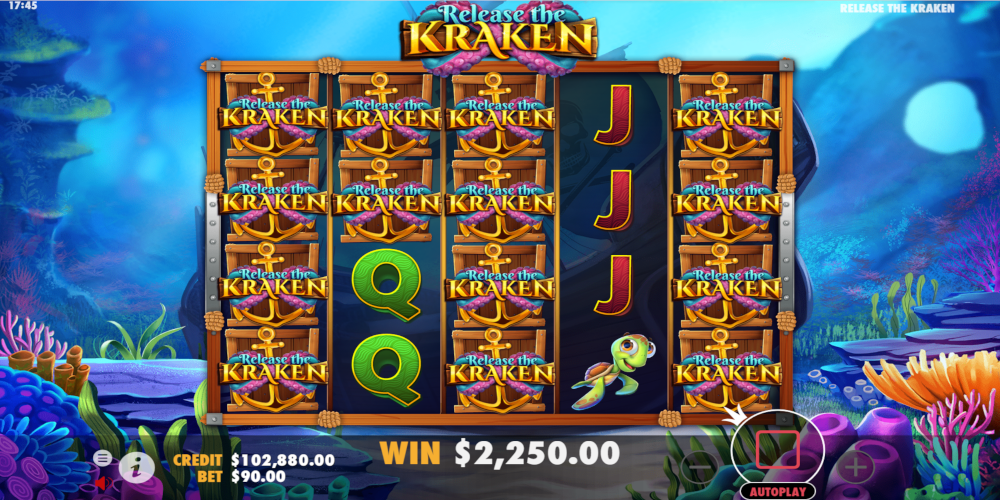 It is not difficult to see what makes this game so special. The reality is that a lot of players who find themselves bouncing from one slot to another can find salvation here. Release the Kraken represents an astonishing realization of the perfect slot. It makes a lot of bold, clever twists compared to the formula established by other online slots.

Moreover, it is a shot of pure positivity delivered with fun and finesse. You need a little pre-existing love for gambling to appreciate the craftsmanship here. It plays well, and a spin or two in, you will be so invested in the game in a way that only the Kraken can grab you.

Try out Release the Kraken Free Play DEMO mode at the top of this page.

Release the Kraken has predetermined betting limits and controls. There is a maximum 10 bets per line and a minimum of 1. The maximum coin value is €0.50, where the minimum is €0.01. The highest stake allowed per spin is €100. There is a 96.50% default RTP. 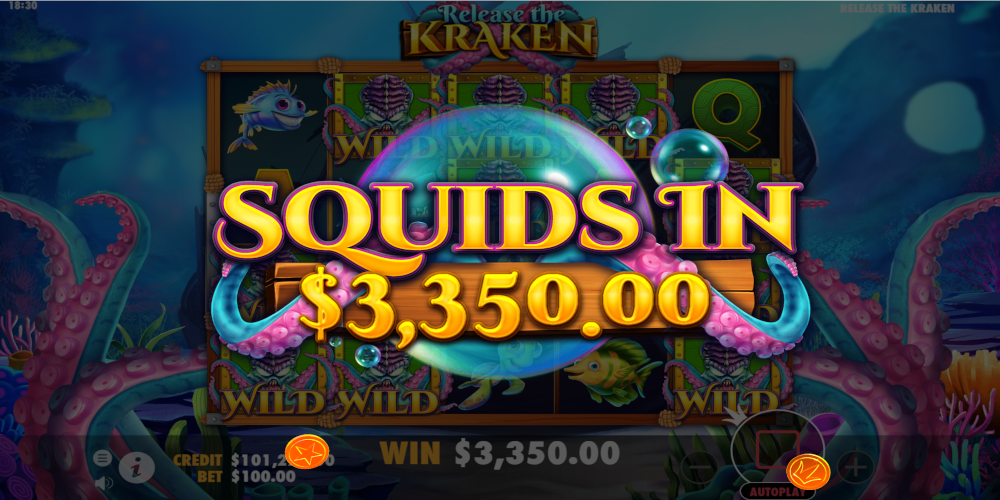 Every symbol pays from 3 to 5 combinations. Depending on the symbols and the number a player collects, the game grants from €25 to €2500. The most lucrative symbols are the wild and the game’s logo, where a winning combination of 5 awards the player €2,500. The shark and the turtle reward €1,250 and €1,000, respectively, for five appearances on the paytables. The fish are just as profitable, giving the player €750 and €500 for five of each. The card symbols pay between €400 and €200 for five of a particular symbol.

Release the Kraken has been a lovely surprise – a fresh twist to the typical slot game which adds intimacy and excitement. It is a creative video slot that offers an extra depth of fun with new bonus features to the core game that makes it the best so far. Once you become familiar with any product from Pragmatic Play, you will find more reasons to keep playing. 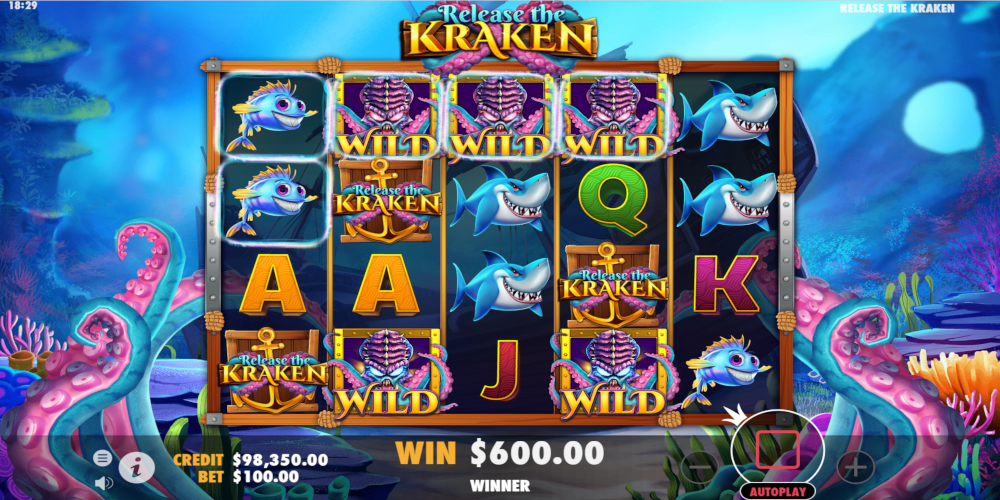