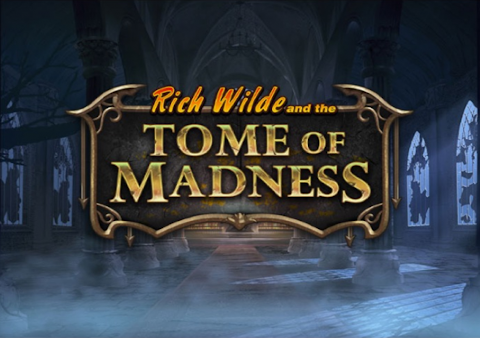 Rich Wilde and the Tome of Madness was created by Play’n GO. It is a modern slot that features five reels. The game offers some senses from Lovecraft in terms of its background and overall atmosphere.

What do people ask about the Rich Wilde and the Tome of Madness slot?
❓ How many paylines have the slot?

This is a cluster game. It means that you need to land at least 4 identical symbols to get a standard win!

❓ What is the Rich Wilde and the Tome of Madness slot RTP?

❓ What is Rich Wilde and the Tome of Madness volatility level?

❓ What is the bet limits of this slot machine?

❓ What is the maximum win on Rich Wilde and the Tome of Madness Play n GO?

❓ Is this slot game has Free Spins feature?

✅ Yes! Read more about it in our Rich Wilde and the Tome of Madness slot game review!

The character by the name Cthulhu has his presence in the game. The backdrop of Tome of Madness takes place against a very eerie place, and in many ways, it looks like a dungeon. The graphics of the game is purely outstanding and very captivating. Everyone can play the slot on Microsoft Windows as well as iOS and Android platforms. Find out more about mobile casinos here.

The main character is searching for ancient artifacts and relics that will have to be collected to discover the secret of the Tome of Madness – this is the plot of the game. Players are offered a 5×5 grid where at least four symbols will have to be landed in a row to get a standard win. Each win will lead to the opening of bonus functions. Several wild symbols are divided into Special Wild, Multiplier Wild and Mega Wild. Whenever the player gets combinations with wild symbols, his wins will be increased.

It is crucial to understand how special symbols work properly. Getting four symbols in the row will result in an ordinary win but players should really target more impressive and exciting wins in the features of Portal, Other World and Mega Wild. Here is what collections of symbols will result in Portal feature:

It is crucial to point out what Void Portal effect means. It basically means that it randomly selects a symbol and removes all those symbols from the reels. All removed symbols are added to the portal meter. Free rounds also look very different compare to the other games. The Other World free spins round has only one round but with having 3 random Portal effects being activated in the process. So, if the Portal meter has more than 42 symbols, every 3 extra symbols above 42 will lead to up to 7 effects. It can be defined as follows:

It will allow you to get more and more wins on the cascade until it disappears.

The main specialty of the game is, of course, its gameplay and especially bonus and free spins feature. It clearly offers something different that cannot be found in any other game. Although free round of the Other World has only one round, its three random activated Portal Effects offer absolutely different experience to players with lots of other features. The following list also defines the range of specialties in the most comprehensive way:

The game seems to be complex, but the Rich Wilde and the Tome of Madness free play DEMO will definitely help to familiarize players with the way the slot has to be played and how wins can be hit. Therefore, it will not take a lot of time to get to grips with playing the casino game and knowing all of its features.

The minimum stake that can be used is equal to 0.10 EUR, whereas the maximum is amounts to 100 EUR. If players play in the UK the same sums are used but in GBP, which is higher than the euros. There are several other aspects that should be pointed out precisely:

Rich Wilde and the Tome of Madness is offered with the use of 37 languages, so betting and winning are available for players from numerous countries from all over the whole world.

The game by Play’n GO has a very interesting plot in which players will depart in their bid to discover relicts and ancient artifacts. It offers good graphics and unusual gameplay, especially in the way free spins and its function operates. Although free spins do not last for very long, it has lots features and if the player is lucky enough, these features will bring not only excitement but also decent financial rewards.