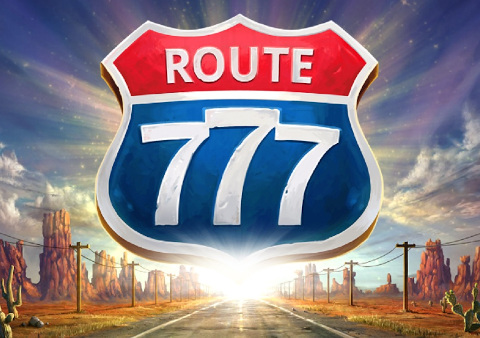 Route 777 is a classic slot machine with modern graphics and improved game structure from ELK Studios. Here, players will find themselves on an abandoned freeway in the depths of the Nevada desert, which is loved by fearless bikers. The participants will be left alone with the wildlife. Scorpions and rattlesnakes will be their companions throughout the journey. It should be stocked with fuel and drinking water, as gas stations in a hot region are very rare. In the demo mode, players can familiarize themselves with the game in detail, try to play, and decide for themselves whether the Route 777 slot suits their preferences.

What do people ask about Route 777 slot game?
❓ How many paylines have Route 777 online video slot?

This slot game is based on 3 reels and 17 paylines.

The dispersion level and volatility are characterized as average. RTP is 96,3%.

The maximum total win in one round reaches 400,000 coins.

By its structure, Route 777 is a classic slot machine.

The plot of Route 777 is revealed using a realistic design. The participants will see a refueling column with the logo of the slot machine. The scoreboard above the playground shows pictures of events that happened in this distant land. Animation increases emotional stress. To control the gaming machine there is a standard set of keys. The provider placed them on the left and right sides of the screen. During the rally, they disappear. With their help, the drums are launched. There is an automatic rotation mode. The choice of the number of credits is a mandatory parameter of the game process. An additional tab defines one of the betting strategies, which is the main feature of the brand’s devices. The amount at stake will change automatically, according to the established algorithm. The help section contains a description of the gameplay features and payout ratios.

In Route 777 slot, game characters are especially interesting. In addition to the sevens of different colors familiar to the players of this device, there is the inscription BAR and a set of fruits: cherries, lemon, cactus. Also, this slot features images of skulls in helmets with wrenches. They fall on the reels one at a time and can occupy several positions, which increases the chances of winning. To get acquainted with the payout table, which presents the rewards for combinations of certain symbols, players should open the additional information window by clicking on the Paytable button. Winning combinations in Route 777 are formed exclusively of three identical elements. This is due to the structural parameters of the gaming slot. In the main game, the Overtake Re-spins bonus option is activated.

When the 1st and 2nd verticals are filled with the same symbols, five Re-Spins start. The filled columns are blocked, dropping down one line only in one round. The 3rd drum rotates stationary.

Many players, noting the low volatility of the slot, often choose the auto-play mode to speed up the process of “capture” of special images and activate bonuses. Free spins and a bonus game can bring large payouts above those that the user usually receives in the course of paid spins.

The bet in all free rounds remains the same and does not change until the end of the draws. Experienced users believe that the maximum benefit from the Route 777 slot is derived during the validity of bonus offers. Therefore, during the session, they cannot follow the drop-down combinations and strive to collect “scatters” and bonus symbols. If they still prefer to keep the game under control, they should keep an eye on the ratio of the total bet and the win per spin. Often, not one but two or even three combinations appear on the screen on different lines simultaneously, the number of payments for which may exceed the cost of the spin.

The dispersion level and volatility are characterized as average. RTP is 96,3%. Players should note:

The maximum total win in one round reaches 400,000 coins. There is no doubling game in here. Route 777 does not provide the Elk Studios cumulative jackpot.

Classic-type three-reel slots are not as popular as in the old days. However, Route 777 is really interesting. Stacked icons, Re-Spins, Free spins, bonus round, automatic betting systems – these options make it fascinating.