Scarab Queen Slot game – How to play and Where to play?

Scarab Queen slot game by Playtech is part of the Fire Blaze game series and boasts 50 paylines and 5×3 reels.

Enjoy the riches of the Ancient Egypt civilization with this feature packed slot, trigger the Re-Spin Feature or Fire Blaze Hold by landing 6 or more of the Sun symbols on the reels and receive a prize from each Sun as they all award prizes.

There’s more, if you land three or more of the Pyramid symbols you will trigger 8 Free Spins with a roaming special reel, and with that comes more Fire Blaze features.

Let the fortunes of Ra bestow their gifts on your bankroll with Scarab Queen Slot. 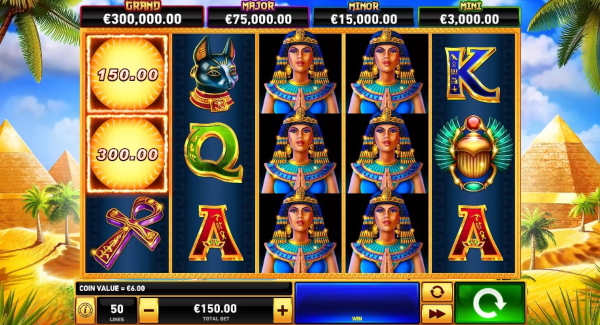 Scarab Queen by Playtech can be played on all devices these being your mobile, desktop and tablet all for as little as $0.50 a spin.

The Pyramid acts as Scarab Queens Scatter Symbol which can trigger up 8 Free Spins when you land 3 or more of the Pyramid Symbols.

The Scarab Queen herself is the Wild symbol and appears on all the reels bar the first one.

There are 50 paylines and 5 reels on Scarab Queen and all symbols will appear singularly except the Queen herself as she is the Wild Symbol and appears on all reels except for the first.

The Pyramid Scatter is also on all 5 reels, the top bet is the Scarab, then the Eye of Horus, Cat or Ankh. There are also Stacked Suns which we will discuss in our review.

When you land 6 Suns anywhere on the reels you will trigger the Re-Spins Feature. Each token has an amount overlaid ranging from 1x-50x your bet. The Suns stay in position and allow you 3 Re-Spins which reset each time a new Sun is added.

When you have 3 consecutive dead spins this feature ends, however should you fill all 15 positions you will hit the Grand Jackpot now that’s rich!

Should you not land all 15 Suns but instead land a Star on one of the positions you will reveal either the Mini, Minor or Major Jackpots. 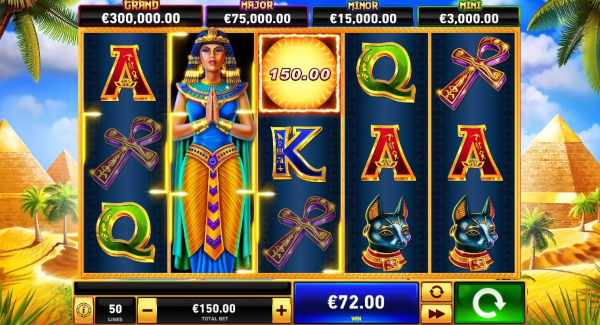 You can win 8 Free Spins if you land 3 or more of the Pyramid Scatters and these can be re-triggered. How you ask? Well, there are a few enhancements when it comes to re-triggering spins and they are the fact that the Queen now appears on all 5 reels and furthermore on any spin, one reel is guaranteed to appear fully filled with either a Wild or Sun Symbol which enhance your chance of both wins as well as the Progressive Jackpot.

The Progressive feature is not to be shunned as it pays up to 15x your bet.

This Queen is not the best of royalty but a Queen none the less, as she does offer some nice prizes and has a decent RTP of 96.50%.

This Playtech Slots graphics and animations are average but does capture the well-used theme of so many other slots.

The Progressive Jackpots and Free Spins are triggered frequently and when this happens you are guaranteed to fill your wallet with some nice money.