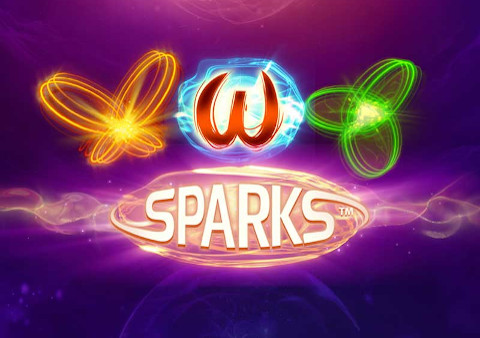 This might be a controversial statement, but it needs to be said anyway. Sometimes when trying to decide on an online slots game, players look for a game that’ll allow them to spin a few rounds without any specific kind of base theme.

What do people ask about the Sparks online slot machine?
❓ How many paylines have Sparks video slot?

The game has 5 reels and 20 paylines.

❓ What is the Sparks slot RTP?

The volatility of this slot game is rated as low.

❓ What is the bet limits of Sparks online slot?

❓ What is the maximum win on Sparks casino game?

Players have the opportunity to win up to 80,000 coins!

❓ What are the special features of the Sparks slot?

Find out more about both of these special features in our Sparks slot review!

Users don’t always want a game that focuses too much on a particular theme. Themed slot games are fantastic, but sometimes players look for something a little more relaxing.

That’s why gamblers seem to enjoy NetEnt games like Dazzle Me and Starburst so much. The themes are sincere and straightforward. So no surprise that their new slot game, ‘Sparks,’ is also a hit.

Now, don’t jump to conclusions. Sparks is still a fascinating game that’s filled with energy. It also includes some distinct features that will keep players thoroughly satisfied while playing it. 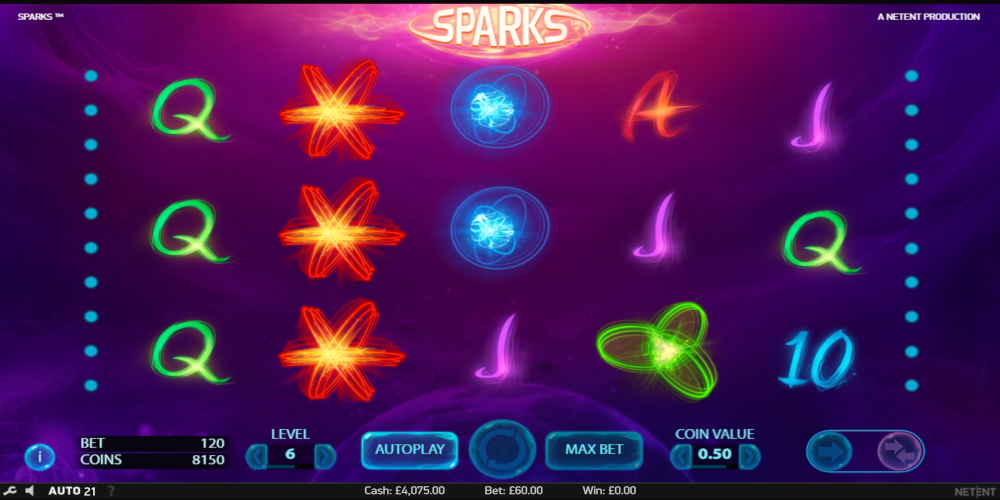 So Sparks is recommended for any and all players that like to slow down every once in a while and take things to a more relaxed level.

Read the full review below to find out exactly what users liked and disliked about this game.

When reviewing this game, testers found a familiar slot interface. It offers 3 rows and 5 reels. On this game’s layout, players will find icons that are very characteristic of the entire ‘Sparks’ idea. There are splashes of sparkly imagery all over the place, and this brings everything together nicely. 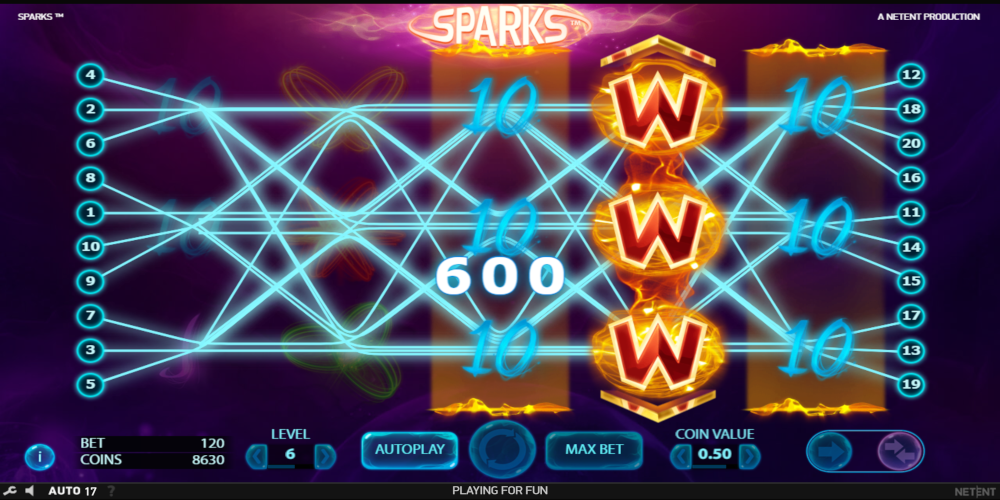 There is a reddish-orange spark, that is similar in shape to a moth. There’s an orb-like purple one. Then there is the green flash that has three arcs. There’s the red one, which is shaped almost like a hexagon, and ultimately, a spherical blue one.

The game also includes the popular 10, J, Q, K, and A icons. But they have been designed to match up with the theme and color palette of the game.

It’s pretty simple, as one can imagine. Players will find all the buttons exactly where they’ll expect them to be, and even though the graphics are uncomplicated, they’re still quite pleasing. It also makes use of a lovely piece of calming music that keeps users chilled during their spinning adventures.

The game looks like everything’s taking place in some vortex or a distant galaxy, and players can regularly get the feeling that they’re floating while playing it. Come to think of it that could just be the influence of that relaxing soundtrack, but hey, no criticism here.

The game has five reels and twenty paylines. Gamblers can play all levels, from one to ten, and players are permitted to select their coin value. The options for coin values range from 0.01 to 2.00. Users are also allowed to choose the number of lines they would like to play.

The autoplay feature allows the game computer to control the spins, giving users a break. Players can program up to 1000 automatic spins, and can also set several different parameters for when the turns need to stop.

NetEnt Gaming offers some of the best controls for online slots, no argument about that. They have also improved and refined the controls. The result is that all players get a great experience on all the NetEnt slot machines.

Sparks slots offer players something referred to as the Wild icon. It’s represented by a large ‘W’ that is adjoined by blue thunderbolts. Wilds can emerge randomly. They appear on any of the reels, and then substitute all other icons apart from the one mentioned below. 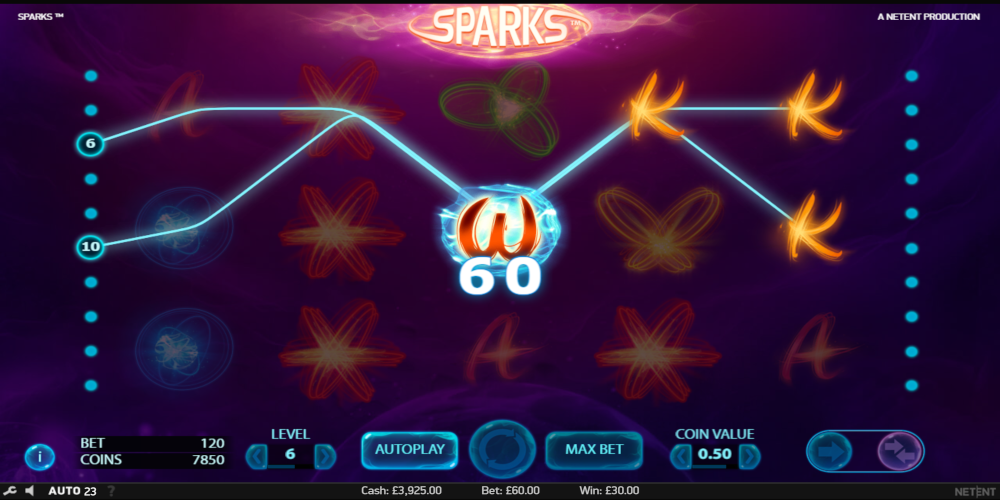 This special Wild can further clone symbols on one or both sides. Leading to high chances to win big. If players are fortunate enough to see one on reel two and four during a single spin and on the matching row, the symbols that get cloned first will happen again a second time.

When playing, Sparks players have 20 different ways to win. Something that is even more impressive than that is a feature that allows players to win one way or both ways.

It might sound confusing, but don’t worry, just continue reading. Conventional slots usually only regard winning combinations that appear from the left of the screen to the right. If players choose the ‘win both ways’ mode, the game considers them a winner no matter which way the pay line is read.

This is an incredible feature and really increases the odds of winning.

It doesn’t matter if people are playing to kill some time, or trying to make some actual money – Sparks welcomes all varieties of players to share in the fun. Bets as low as €0.20 can be placed, and players can place others as high as €400. A total of 10 bet levels is available, while users have a choice out of eight coin values. 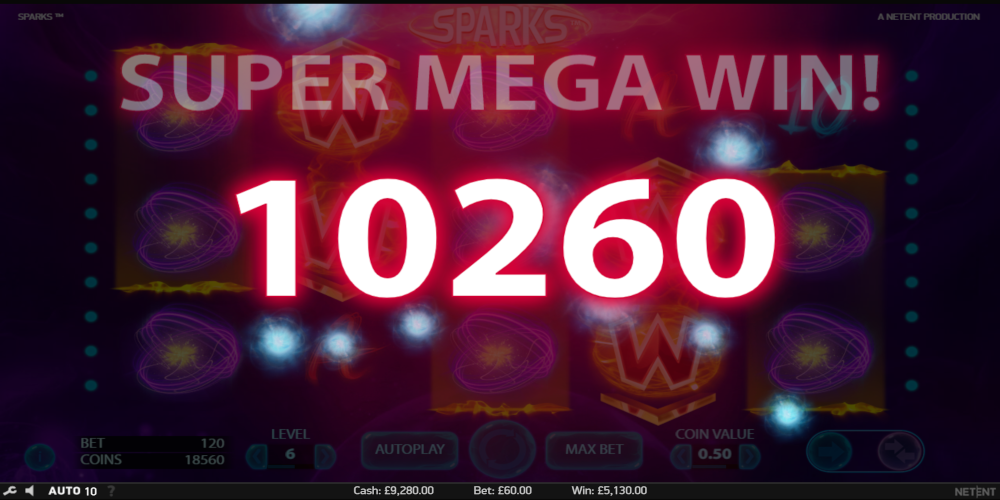 RTP of this game is a very impressive 96.54% with low volatility. Find out more about RTP slots here.

Players who enjoy NetEnt’s innovative features will really enjoy Sparks. Most players seem to like it because of its straightforward design, graphics, calming music, and simple rules.

The fixed payouts might be considered low by some, and it doesn’t offer a bonus game or free spins, players still have the opportunity to win up to 80,000 coins!

This is by no means the most exhilarating slot game out there, but it is still a game most players will enjoy playing.