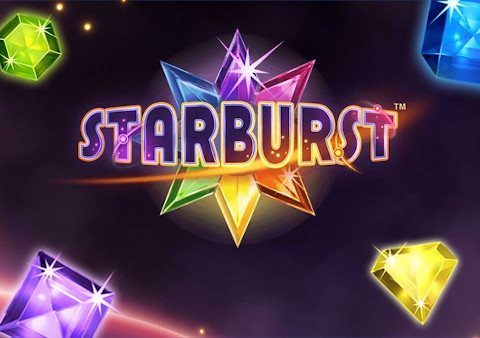 Starburst is the most popular slot game released by provider NetEnt. This is a classic arcade feel slot, with a unique wild feature that gives the slot its name. Net Entertainment has a reputation as one of the top names in the iGaming industry. Their software and designs hold up to a high standard, and this slot is where players can really see why this provider is so popular.

What do people ask about the Starburst slot machine?
❓ How many paylines have Starburst Touch slot?

The slot is played across 5 reels and 3 rows, with 10 paylines.

❓ What is the Starburst slot RTP?

It is rated as LOW volatility game, but most players will experience reasonably frequent but quite small wins.

❓ What is the bet limits of Starburst slot NetEnt?

The range in betting limits for Starburst slot casino is decent, with a minimum wager of €0.10 up to a maximum of €100.

❓ What is the Starburst slot Big Win?

This slot game gives players the potential for a maximum win of €50,000 if they manage to land 5 BAR symbols. Come here and try Starburst slot Free Play DEMO at the top of this review!

❓ What are the special features of the Starburst game?

This slot game has two features:

Find out more about special features in our Starburst slot review!

Play Starburst slot DEMO at the top of the page!

This slot game hasn’t Scatter symbol and you will not get 10, 20 or 30 Free Spins, but you can get Re-spins.

Also, some casinos could give Starburst slot Free Spins no Deposit.

In this review, we will look in further detail at the game mechanics for the Starburst slot. Potential players can find more information on why this game is so popular, including the unique features of the slot. They can also read about the betting limits and potential wins available from Starburst.

The Starburst slot game is played across 5 reels and 3 rows, with 10 paylines. Wins for this game use win both ways technology. This means that a player can match 3 or more symbols in any direction across the pay-lines for a winning combination. 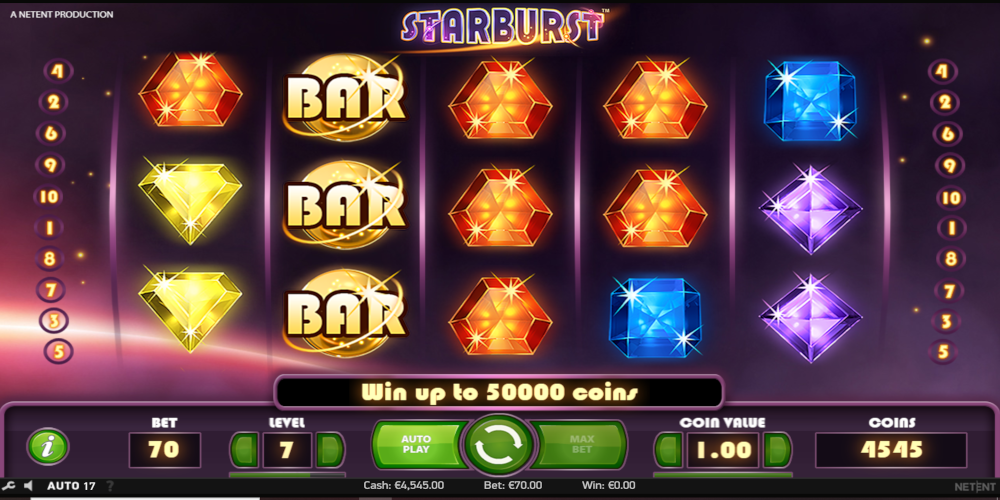 There are several basic adjustments to make before playing a spin. First, the player can select how many paylines they want to use. They can then adjust the bet level to adjust the amount for each payline in play. As well as the bet level, they can choose to change the coin size to anything between 0.01 to 1. There is also a Max Bet option to play the spin with the highest possible wager for their selected paylines.

Players can also use the auto spin feature to play out a set number of spins at specific intervals between 10 and 1,000. The Autospin also has more advanced settings to allow them to play more responsibly. They can set the spins to stop when they’ve won over a certain amount, or if they lose the amount they’ve set.

The basic symbols for this slot are what people would expect to see on a classic arcade slot. Players will see five different colored jewels, lucky red 7s, and BARs. The BARs are the highest paying symbol, offering 250 times the stake for five of a kind. However, this is where the win both ways feature helps winnings. If someone matches a full row of BAR symbols, they would actually receive 500 times their stake, as the win is counted from both left to right and right to left.

The special symbol for this slot is the Starburst that gives the slot its name. The symbol will only ever appear on reels 2, 3, and 4. This is the Wild symbol for the slot and will substitute itself for any paying symbol to form winning combinations where possible. However, this is not the Starburst symbol’s only function. 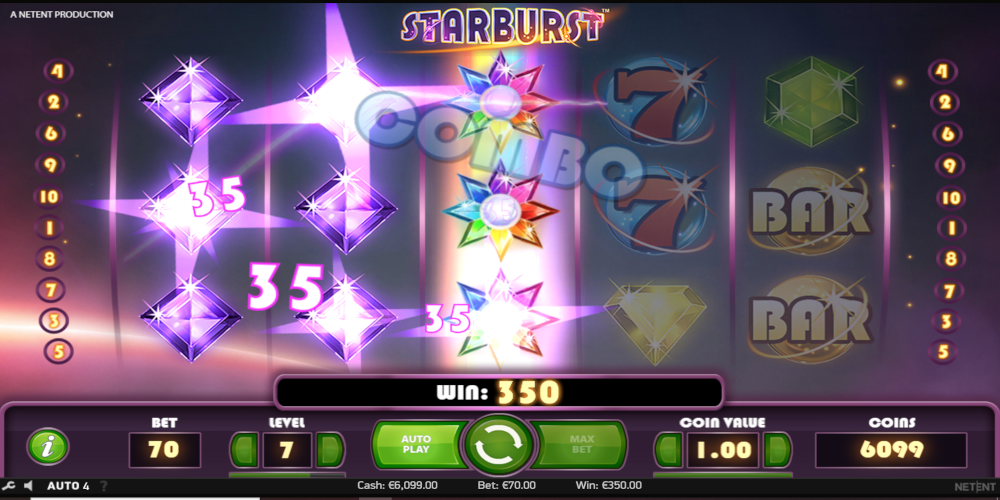 The Starburst wild appearing anywhere on the reels will trigger a re-spin. During this, the Wild symbol will expand to cover the entire reel it’s on. If another wild symbol appears during this round, then another re-spin will be triggered. This means that players can get up to three re-spins from landing a new wild each round.

While 3 additional spins may not seem like much, this expanding wild offers an excellent opportunity to build up to some significant wins. There’s a very good chance for players to increase the number of high paying BAR symbols across their reels. They also have to remember that the expanding Wilds are in addition to the win both ways feature.

This is the most popular slot out there, and this is partly due to the classic simplicity of the design. The familiar arcade symbols are paired with arcade sound effects from the 80s and 90s. The 3D graphics used help to make it immersive for the player. The slot manages to balance being modern while also bringing players a nostalgic experience.

The unique feature of this slot is the re-spins triggered by the Starburst feature. The use of the expanding wilds lends excitement to the player and the opportunity for more frequent wins. There have been many similar slots produced by other providers, but none have surpassed this NetEnt classic slot. 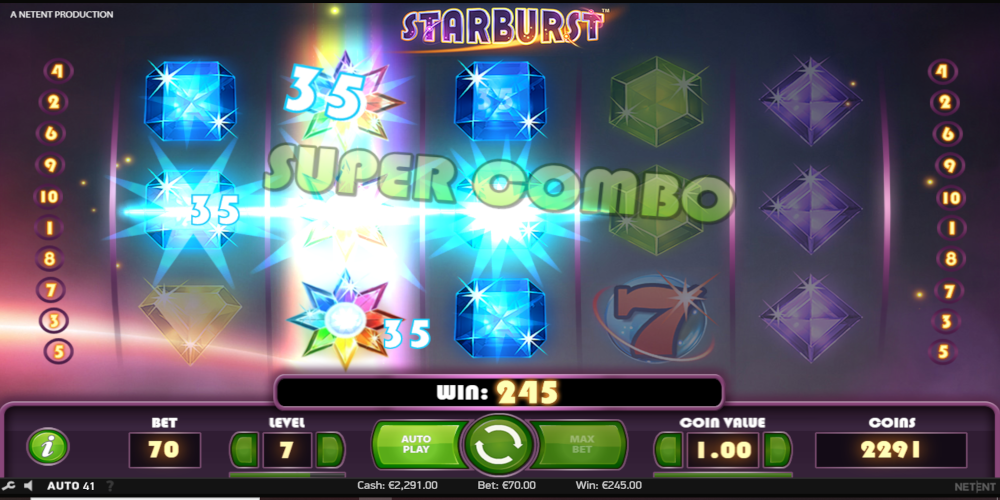 The range in betting limits for Starburst is decent, with a minimum wager of €0.10 up to a maximum of €100. This gives players the potential for a maximum win of €50,000 if they manage to land 5 BAR symbols. It’s the maximum win that gives the game low volatility. However, most players will experience reasonably frequent but much smaller wins.

The volatility of the slot is a good indication of what to expect during play. The return to player or slots RTP percentage is a much broader representation of how much stake is returned to players. This is an average taken from over one million spins of a slot. It’s more of an idea of the risk level than an indication of the expected winnings. The RTP for Starburst is 96.10%.

This is a slot classic and accessible for all players. The simplicity of the gameplay allows players to enjoy the unique Starburst re-spins feature even more. There’s a reasonable betting range that caters to all different types of players and allows for some significant wins. With the relatively high RTP rate, they have a decent chance of landing some wins from this slot.

People love the classic arcade-style of Starburst, as well as the immersive graphics and nostalgic soundtrack. This is the most popular online slot by NetEnt available, mainly for the lucrative Starburst re-spins round. Come and join the millions of other players who love this slot and see what all the fuss is about. 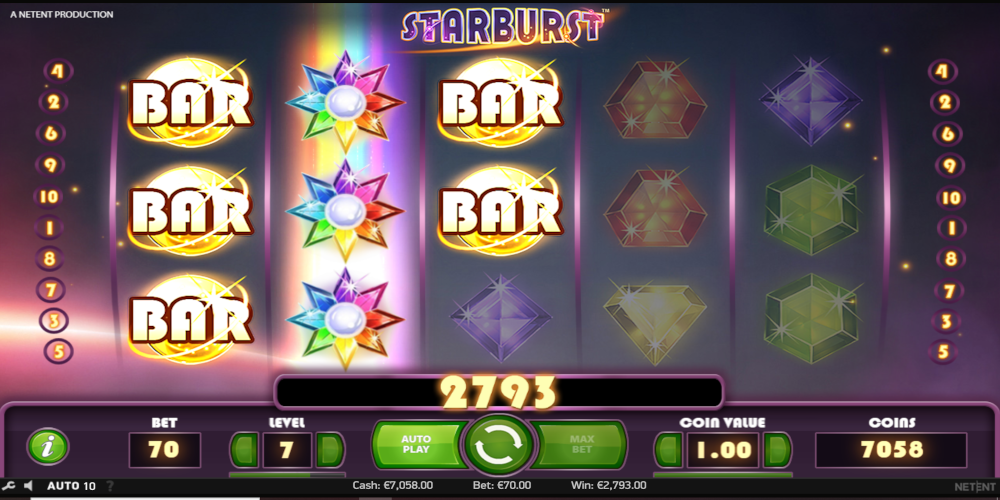