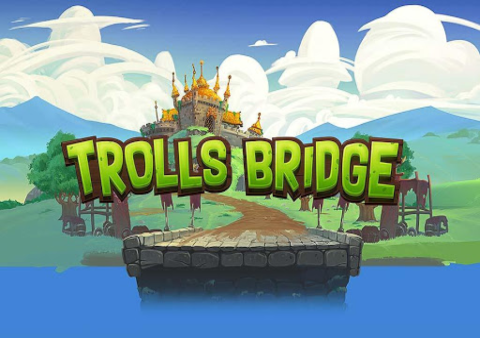 The premise is based on a fantasy land of magical thrills, mountains of treasure, and adorable trolls. Some say it has a Warcraft feel, while others describe it as reminiscent of the classic video games of the ‘90s, such as Super Mario World.

Whatever your point of view, this game offers lots of visually pleasing graphics to keep you entertained while you win piles of money that would make any troll proud.

Free Spins can be triggered in 2 different ways: through the Bonus Pot symbol and the 3 Free Spins symbol.

Land the 3 Free Spins symbol on the third, fourth, or fifth reels to get the same selection of Free spins options with the extra feature picks.

The Golden Bet offers you the chance to win one extra feature pick during the Free Spins mode. This is an optional feature that must be activated at the start of a turn before you begin to play. Turning the Golden Bet on will cost you an additional 5 coins per spin.

The Bonus Stone awards multipliers for winning spins and coins for losing ones. (More on this below.)

There are 4 different Wild symbols: regular, random, sticky, and troll. The regular Wild can appear at any time. The other 3 Wilds only act during Free spin rounds. Sticky Wilds only appear on reels 2-4.

There are 4 different low pay symbols. They are the traditional card symbols: spades, hearts, diamonds, and clubs.

Troll symbols are the most important. They are the high pay symbols, and they are worth various amounts.

The standout feature of this video slots game is its Golden Bet feature, and at the beginning of each game, you have the chance to activate it. Doing so slightly increases the minimum and maximum betting range for your play. More importantly, though, it also raises the return to player level and gives you an extra feature pick during the Free spins bonus round.

Another cool feature is the Bonus Stone. Available during the base game, this feature randomly activates throughout the game. When you are lucky enough to have this Betting Stone enabled, 2 possible things can happen. If you win, your payout will be multiplied by anywhere from 2x to 5x. On your losing spins, you will still receive between 100 and 1,000 coins.

The minimum amount of coins that you are allowed to bet in Trolls Bridge is 0.01, with the maximum set at 5. The maximum payout for wins is 250,000. Jackpots are worth 250.

The Return to Player (RTP) value is 97.0% and the game’s volatility is split into two different percentages. Normal play volatility sits at 96.0%. When you activate the Golden Bet, though, it increases to 96.3%.

Trolls Bridge video slot by Yggdrasil offers hours of enjoyment and a variety of ways to win money. The graphics will keep you entertained while you play, and the soundtrack is delightfully upbeat.

Before you know it, you’ll be sitting on a mountain of treasure worthy of any troll’s desire!