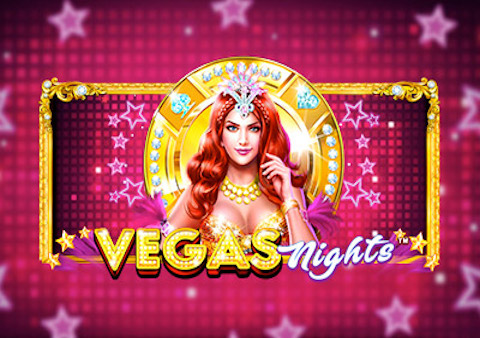 Vegas Nights is an online slot game created by one of the leading game providers, Pragmatic Play. The game’s theme depicts the typical Vegas casino life and the thrills that come with the booming nights of the city.

The slot game is based on 5 reels and 25 paylines.

❓ What is the Vegas Nights slot RTP?

The game has a higher volatility than most others in its class. This reduces the number of payouts but can give out huge rewards when it does the payout.

❓ What is the bet limits of Vegas Nights slot machine?

❓ What is the maximum win on Vegas Nights game?

When you bid the maximum bet and catch 5 highest symbols, you can win 750 euro.

❓ What are the special features of the Vegas Nights casino game?

This slot game has:

Find out more about all of these in our Vegas Nights slot game review.

The original version of this slot game is still in use and is currently available on online platforms, such as 1xBit, Videoslots, as well as on mobile devices, both Android and iOS. Vegas Nights can be enjoyed anywhere and at any time with availability on different platforms to ensure no one is left out. It also has a fun mode, which is the full game, that you can play and enjoy without betting on anything, making it a slot for everyone.

The game comes with one of the best combinations of amazing features that appeal to a typical modern-day of a slot gamer. For starters, it is played on 5 reels, has 3 rows, and 25 fixed paylines. It has the following buttons and controls, which could certainly be known by the most experienced players:

To play, use the default bet value of €0.05 or set it using the “Bet” button. After that, just hit “Spin” and wait for the game to complete. You may also choose to use “Autoplay,” which reduces your active involvement in the game. To win, try to get as many spins as possible, as this increases your chances of winning. Winning combinations are formed across the 5 reels and 3 rows, starting from left to right.

Vegas Nights comes with 3 special symbols, including a Wild card (spinning reels), a Scatter (casino chip), and a Super Wild symbol. The Wild symbol can replace all symbols in the main game except the Scatter, but it also multiplies the line win 2x, 5x, or 10x. A Scatter win is worth 2x the stake for 3 symbols anywhere on the screen, 5x the stake for 4, and 10x if you collect 5 Scatters on one spin. The Super Wild symbol substitutes all symbols except the Scatter.

The game comes in 20 languages, including English, French, Russian, Thai, Korean, and Indonesian. This is a common feature of Pragmatic Play online casino games, which may be responsible for their coverage of all demographic backgrounds. The interesting thing is that the game can be played just for fun if a player chooses not to stake his money.

Vegas Nights is one of the best slot games ever created by Pragmatic Play, even in the entire slot game industry. Unlike the others, the graphics are outstanding, giving players a virtual experience of the glamorous life of Vegas.

The objects in the game are animated to give players great visual pleasure. When playing the game, users get the feeling of being in a real casino, which makes gaming a worthwhile venture for them. Moreover, players who use smaller screen devices also get an excellent resolution with all the details clearly visible on their screens, so that no one is left out of the fun. This graphic quality and vividness set this game apart from others like it.

Vegas Night’s minimum bet is €0.25, and the maximum is €125. Such a low minimum bet allows just about anyone to try this game without risking any substantial amount if it does not turn out in their favor. Like other Pragmatic Play games, it has a high Return to Player (RTP) of 96.05% and an alternative RTP of 90.82%. The game has a higher volatility than most others in its class. This reduces the number of payouts but can give out huge rewards when it does the payout.

However, it does not come with a progressive jackpot, which is one of its weaknesses that many reviewers have pointed out. First-time players can practice the game using a demo account before staking real money, thus reducing their chances of losing.

For any iGamer in the 21st century, Vegas Nights can prove to be an interesting slot game with its modern design that portrays the typical Las Vegas night, which some refer to as the capital of casinos.

If you are looking to have a taste of the glamorous life in Vegas, even if virtually, this is a game you can try out to get the satisfaction you crave. It is not without a few weak points, as mentioned earlier, but overall it is a pretty interesting game.