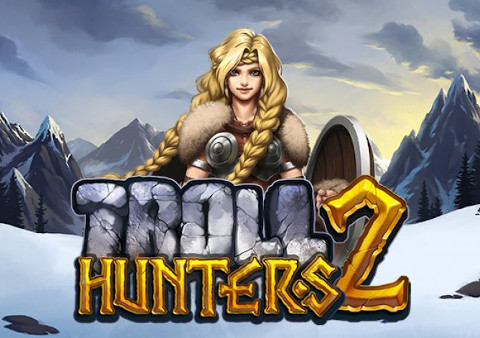 Troll Hunters 2 is a Play’n GO video slot that was released in June 2020. This game is a sequel to the popular Troll Hunters slot machine, which is available for players since 2013. Troll Hunters 2 slot is based on Scandinavian mythology. It has a great design and offers an incredible level of graphics and animation.

The slot has 5 reels and no paylines. You’ll get a win every time any 3 or more symbols in a row form a combination vertically or horizontally. The game field has 5×5 structure.

❓ What is the Troll Hunters 2 RTP?

This slot is very high volatility. It means that winnings not very frequent, but really big!

❓ What is the bet limits of Troll Hunters 2 video slot?

❓ What is the maximum win on Troll Hunters 2 Play n GO slot?

With max bet you’ll be able to win up to 5000 currency units from one combination. The highest possible prize in the game is 500 000 coins. The highest winning ratio without Wilds is x50.

❓ What are the special features of the Troll Hunters 2 casino game?

Find out everything about these features in our Troll Hunters 2 slot review.

You’ll be able to play the game on all kinds of devices, including PC, Mac, iOS, Android and Linux. Preferred browsers for instant play are Chrome, Safari, Firefox and Edge. Choose the best casinos in mobile here.

The slot has 5 reels and no paylines. You’ll get a win every time any 3 or more symbols in a row form a combination vertically or horizontally. The game field has 5×5 structure. On the left from it, you’ll see the meter for Multiplier Wilds Feature and a Drop Wins Multiplier in the upper left corner.

All the main controls are just under the game grid. It includes the Spin button, Auto Spin, Information and the buttons “+”/”-” to change your bet level. Use “i” to open paytable and learn more about special features.

A thin black line in the bottom part of the screen will show you your current balance, bet level and the latest win. It also has buttons to turn the sound on/off, get the additional information and change basic game settings. TrollHunters 2 slot supports more than 30 different languages.

To get a win in the casino game at least 3 identical symbols should appear on the grid vertically or horizontally in the consequent order. The best prizes are provided for 5 such images. Troll Hunters 2 slot has the following symbols:

The more symbols are in the combination, the better wins you’ll receive.

This Play’n GO gmae has 4 different Wild images. The first one is the Odin symbol. It’ll appear in the main game when a blond-haired troll hunter is in the game standing right to the right from the grid. The second Wild is X2 image that can be placed on the reels in case a red-haired hunter is active. The third Wild is X3. It appears when the raven-hired troll hunter is to the right from the grid.

Odin Wild symbol shows up on the reels when you get a certain combination. It may appear instead of images that formed this combination. Your win fills the Multiplier Wilds Feature meter. Three-symbol will fill one section, four images will give two sections and five symbols will fill 3 sections. When all the parts of the meter are filled in any way, one or two Wilds are randomly placed on the reels. The type of Wild matches the appropriate troll hunter.

The last type of Wild you’ll meet in the slot is Troll. This symbol will appear only in the bonus game when you’ll fill the 5-section meter. The image has 2×2 size. Depending on the type of game you’ve chosen, it has all the features of Odin Wild, X2 Wild or X3 Wild.

Therese also a bonus game in the slot. Every time before the spin the title “BONUS” appears behind the symbols. If your mage to clear it by getting combinations and removing images from the grid that way, a bonus round will start.

You can choose three types of the Free Spins to win:

A Wild symbol will appear when you fill the meter. The game will continue normally after that.

TrollHunters 2 Play n GO slot has a special Drop Wins feature. It allows you to get more wins every time you get another combination in a row. Whenever 3 or more identical images appear on the reels horizontally or vertically, you get a prize. At the same time a Wild symbol may appear and the previous images will disappear. If this even has formed another combination, you’ll get a win again. This reward will be multiplied. The more combinations in you receive in a row, the higher wins you get each time.

When the Multiplier Wilds Feature meter is filled, Wild symbols will be placed on the reels. It’ll help you get even better prizes. After that the game will go on in a normal way.

The more you bet in the game, the better prizes you may receive. The minimum bet is 0.2 coins, while the maximum one is 100 coins.

Troll Hunters slot has very high volatility and offers gamblers 96.5% Return to Player level (slots RTP), which is a rather high rate.